Q & A: US foreign policy lessons and failures along the Sunni-Shia divide 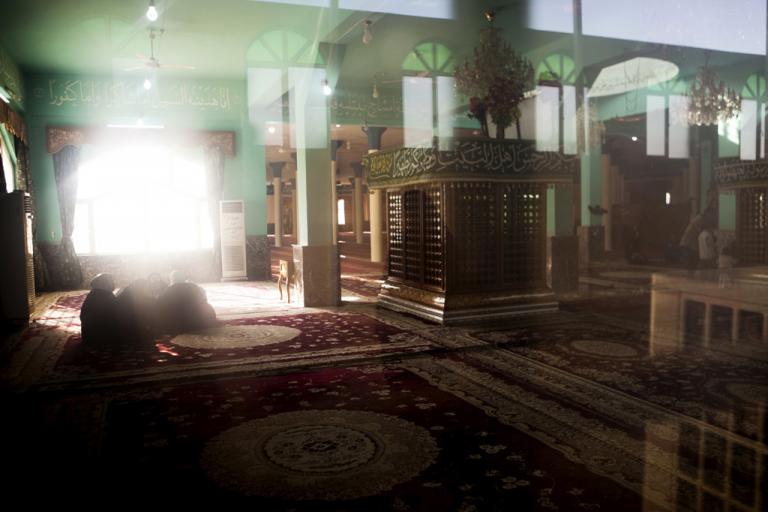 This shrine is called Imam al-Huwa (Imam of the Wind) in Dakouk, south of Kirkuk, a largely Shia Turkmen town in the disputed territories claimed by Kurds, Turkmen and Arabs. - ((Franco Pagetti/VII/GlobalPost))

Reza Aslan is a professor of religious studies at Drew University and a senior adjunct fellow at the Council on Foreign Relations. He is the author of No God but God: The Origins, Evolution and Future of Islam, an international bestseller. Aslan spoke to The GroundTruth Project— presented in partnership with the USC Annenberg School for Communication and Journalism — about lessons learned by the US after 10 years of engagement in Iraq and Afghanistan, and how these lessons have informed US policy toward Syria.

Lauren Madow: What lessons about the Sunni/Shia divide should the US have learned from its involvement in Iraq, and how might we apply these lessons to Syria?

Reza Aslan: Well, perhaps the first lesson that the United States should have learned is that there are such a thing as Shias and Sunnis in the world. That is something that actually the Bush administration seemed to be fairly ignorant about as it was planning the war in Iraq.

There’s evidence to suggest that even on the eve of the bombing, President Bush himself was unaware not just of the intricacies of the Sunni-Shia divide in Iraq but that there was such a thing as a Sunni-Shia divide in Iraq. But in more serious terms, I think that when talking about this sectarian division in the Middle East, we need to divide it between religion and politics. Politically speaking, there is a deep sectarian divide in the region, but it has more to do with the rise of Iran as a major regional power, with the Shia government in Iraq, certainly with the Shia-dominated regime in Syria.

In that case, the principal divide, for instance, between the so-called Sunni axis, which is sometimes referred to as Turkey and Jordan and Saudi, and the Shia axis, which is often referred to as Iran, Iraq and Syria, is not about religion. This is not sectarian insofar as an argument over who should have succeeded the prophet Muhammad 14 centuries ago. This is about regional ambition. This is about national security issues. It’s about competing interests in a destabilizing region.

So we have to be careful about making too much of a theological argument about what is, in fact, simply a geopolitical conflict in the region. Now, when it comes to internal conflicts in countries like Syria, or internal conflicts in Iraq, or for that matter even in Pakistan, where we are seeing Sunni-on-Shia or Shia-on-Sunni violence, that is not about politics. That’s about religion.

The slaughter of the Shia in Pakistan, which has gone unabated now for a year, is about a puritanical sect of Sunni Muslims who believe that the Shia are infidels and need to be wiped from the face of the earth. The same can be said about the slaughter taking place in Iraq, and indeed even today there was another attack on a Shia enclave in Iraq that ended up killing 50 people. That has some political overtones to it, certainly, but that is much more theologically motivated than it is politically so. And then certainly when it comes to the situation in Syria, which has degenerated into a sectarian conflict, no question, that has far more to do with the Assad regime using the sectarian divide as a way of delegitimizing the rebels and the insurgency.

In other words, by simply making it look like some sort of sectarian conflict, not a conflict between a brutal regime and an insurgency that wants that regime’s downfall, Assad has the added advantage of getting his Shia neighbors to join into the conflict, including Iran and Iraq.

LM: In its limited engagement so far with Syria, do you see the US repeating any of its earlier mistakes in Iraq?

RA: On the contrary, I think that we have learned a valuable lesson from the Iraqi conflict, which is to do our very best under whatever circumstances possible not to become militarily engaged in this region. Part of the hesitancy of the Obama administration in taking any kind of hard line on the uprising in Syria is precisely because it is gun-shy from the horrific consequences of the Iraq war. Now, that’s for better or worse. One can say that Syria would not be in the situation it is now, 70,000 dead … no end in sight, had the Obama administration been more forceful in its response to the Syrian regime’s slaughter of the uprising in the first few months. But again, the fact of the matter is that having come out of the Iraq experience, there was simply no stomach either in the administration or, frankly, among the American people for getting fully involved in another Middle Eastern country. So we have learned a lesson. Whether it’s the right lesson or not, I think is something that can be argued. But most definitely, we have learned a lesson, which is, “don’t get involved.”

LM: What do you think would be our best hope, if any, of helping to create some kind of resolution in Syria? Can the US play a role?

RA: I think the days in which the US could play a constructive role in Syria are long gone. It is no longer an uprising. It’s now a civil war, and it’s a civil war that has drawn all kinds of outside elements, including elements connected to al-Qaeda, jihadist elements, who have no interest in Syria itself but see it as a battleground for their larger transnational ambitions. So there is really — and I hate to say this because I understand the implications of what I’m saying — there is nothing really left for the United States to do.

We’ve upped the ante on the amount of nonlethal support that we’re bringing into the country, but nobody seriously thinks that that is going to tip the balance away from the Assad regime. Meanwhile, the State Department says almost on a daily basis, as though it’s some kind of verbal tic, that Assad’s days are numbered. We heard former Secretary of State Hillary Clinton say this all the time: “Assad’s days are numbered.”

Well, maybe she should tell us what number she has in mind, because it’s been two years and there is no reason to think that the Syrian regime is on its way out. On the contrary, it’s now a zero-sum game. The regime has gone so far in suppressing this uprising that it no longer has any kind of recourse to a peaceful resolution. They are all in, as it were.

LM: What kind of misapprehensions about the Sunni-Shia divide do you see in the US? How deep does this rift really go? To what extent is it manufactured by governments and/or the media?

RA: The Sunni-Shia divide is manufactured by those figures in the region, both governments and non-state entities, whose interests are advanced by stirring up this kind of sectarian conflict.

So whether we’re talking about the government in Syria or the government in Iran, or whether we’re talking about groups like Hezbollah and Al Qaeda, all of which really get their very identity from the sectarian divide—it’s how they define themselves, it’s how they define their enemies. And again, whether it’s for political reasons or religious reasons doesn’t really matter. The issue is that it serves their purpose.

Of course there’s been a historic divide between Sunni and Shia, just as there’s been between Catholics and Protestants. In the 30 Years War, which was a grand sectarian battle in Europe between Catholics and Protestants, some half of the population of Germany alone was killed. So these kinds of bloody sectarian conflicts are by no means unique to Islam, but just as the Catholic-Protestant divide in Europe was just as much a political conflict as it was a theological one, that’s what’s going on here.

And I think if there is a misunderstanding, a misperception of this conflict, that’s where it lies, [in] the inability to recognize the geopolitical interests that are involved in stoking up sectarian violence and hatred. So if we are interested in bringing those kinds of sectarian tensions to an end, we can’t divorce them from those geopolitics. We have to deal with the political interests that are at play both inside these countries and between them, within them, if we are going to actually do something about the bloodletting that we’ve been seeing over these last few years.

LM: Is a return to relative peace between Shias and Sunnis possible?

It’s a personal animosity that has to do with the way that one sees oneself, one’s religion, one’s politics, one’s very worldview. The reason, however, in this one particular spot, this one area in the Middle East, that we’re seeing it erupt into these really horrific levels of violence is that politics are involved, that interests are involved, that money is involved. And when you bring those kind of geopolitical issues at play, the latent prejudice or biases that one may have toward someone of another sect all of a sudden become a zero-sum game, it becomes an issue of identity, it becomes an issue of national survival. And when that is at stake, then of course it’s going to lead to this kind of violence.