Pushing forward: How one reporter took over a 20-year-old investigation 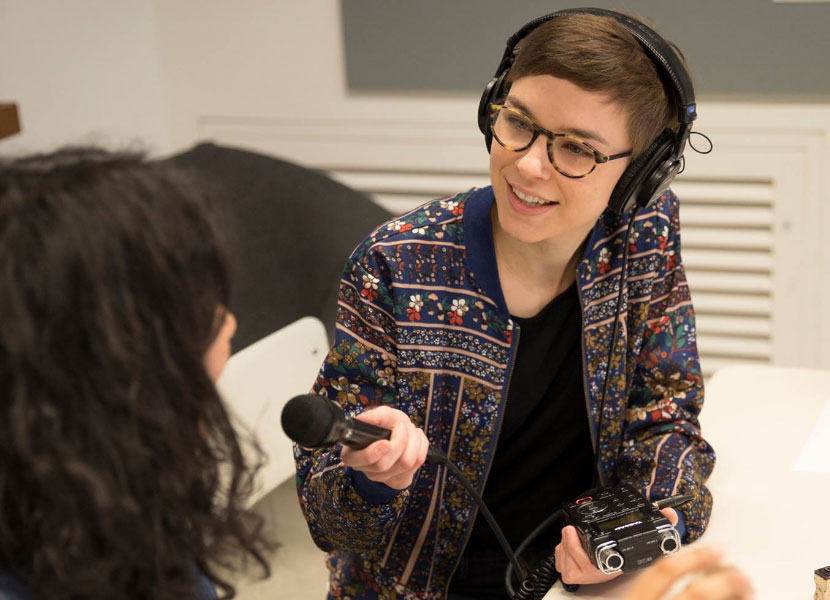 Report for America corps member Phoebe Petrovic has been following a murder investigation for the last six months as part of her work as an audio reporter for Wisconsin Watch. (Photo by GroundTruth)

Editor’s note: For this edition of Navigator, we’re proud to share this dispatch from Report for America corps member Phoebe Petrovic, who offers great insight into how to approach a criminal investigation, organize and follow-up on an archive of research, and ensure due diligence in her reporting. Even though the material facts of the case cannot yet be revealed, the dispatch is full of useful takeaways that other journalists can leverage in their own investigations.

Our On the Ground series is comprised of stories by corps members like Petrovic, whose reporting captures the life and challenges in the communities they cover. You can find On the Ground dispatches from across the country here, or subscribe below for email alerts on the latest from our reporters.

MADISON, WI—I’m investigating a murder committed in June 2000, in the Fox Valley of Wisconsin, just south of Green Bay, as well as the potential wrongful conviction that resulted from it. More precisely, I’m investigating the police investigation of the crime and the state’s prosecution of the accused, which reveal critical details about how justice functions in Wisconsin—not just then, but now.

I have spent nearly every day of the last six months reporting from a close-knit community two hours north, where paper mills and rushing rivers mark the landscape. Extracting, reconstructing and mapping details and accounts from faded police reports and witness statements, stacks of court transcripts, handwritten letters, staticky 911 calls and radio traffic. All to determine what happened one summer twenty years ago.

Sometimes, I find myself caught between the high ceiling of the story I’m working on and the ground of the world I live in, perhaps most acutely as I ride my bike past the Wisconsin State Capitol. Since the murder and resulting conviction, five governors have rotated into and out of its marble-floored rooms. Two of the prosecutors involved in this case have since become judges, and other officials have received their own promotions. But from my desk in the Wisconsin Watch newsroom, I’ve learned that though administrations may change frequently, systems do not. Where problems exist, they often persist little noticed or mentioned until brought into the light.

My editor, Dee J. Hall, has followed this particular story—the case and the players—for well over a decade. A true watchdog, she sunk her teeth into this story and refused to let go, well after other outlets lost interest. In 15 years, she amassed a trove of materials to help explain the statewide, systemic context of this crime, and its consequences for Wisconsinites beyond the city or county borders—a project still unfinished, that she entrusted me to continue.

When I started here in June, I inherited a filing cabinet stuffed with documents and an online database in similar disarray. Dee had amassed this information piecemeal, one packet of prison mail or records request at a time. Investigative reporting requires tenacity, meticulousness, and organization, qualities that make possible the disciplined work of exposing wrongdoing in the public interest.

To begin, I took the work of a single reporter spanning 15 years and organized it into a series of databases, indexes, and conclusions intelligible to an entire team; you can’t begin to decipher a document’s meaning, nor can you determine what you’re missing, until you grasp the totality of the material. For weeks, I scoured everything we had: hundreds of packets containing tens of thousands of pages. I sorted them into categories. Each individual file was discretely numbered and carefully named. That information, along with the document’s source and date, its content description, its related characters, themes and tags, plus its link and database location, went into a single spreadsheet. This is our index. Every document we have related to this story is entered into this sheet, so anyone on the team can efficiently find any piece of information or document needed.

After I built the database and detailed index of documents, I began reading. This is a story about systems, and my work is to construct a reliable timeline; what happened 15 years after the murder is no less important than what happened the day it was committed. I read closely, putting any date or time into the timeline, pulling any name as a potential source, noting questions and inconsistencies.

The story broadly contains two versions of events: that of the state (the police and prosecutors) and that of the defendant. But there’s a third one, too, left out of the criminal complaint and closing argument. It’s that one I’m most interested in, the complex, maybe even elusive, truth. Sometimes, the facts are evident in the documents themselves: a police officer claims he arrived at 6:30 p.m., but the dispatch log shows he arrived at 8:00 p.m. More often, the truth requires excavation: open records requests, interviews, pattern analysis.

On the eve of the new year, I finished reading the twenty-year long court record and discovery file, which contains police reports, witness statements, autopsy reports, crime scene photographs, DNA test results, fingerprint results, blood spatter analysis, evidence inventory and chains of custody sheets. Along the way, I teased apart consequential inconsistencies from insignificant ones, found evidence to rebut claims of both prosecution and defense and identified gaps no one has reported before. Now, I’ve begun tackling the most pressing issues one by one, and contacting everyone I can.

Though investigative reporting is built on data and documents, the interviews are essential.   Nearly everything I read or discover raises questions. Is this common or anomalous? Is this insignificant or consequential? Is this harmless error or willful misconduct? Is this an aberration or a pattern? I run these by experts in the fields of crime scene investigation and forensic science, by former police officers and prosecutors, by sources still employed in state agencies. Then I contact the witnesses, neighbors, friends and family members of those involved. I call them up, knock on doors, write letters, and often speak with them several times before they agree to go on record.

It’s the type of work that makes you stand up straight and plant your feet firmly. The questions I have, and the answers I’m uncovering, matter not just for the person who lost her life, or the person who got convicted for her death, but for all of us in Wisconsin. As a source once told me, it’s the hardest cases, the most awful crimes, that we must test the integrity of the system against; without confidence in those, we cannot have confidence in the rest of the system.