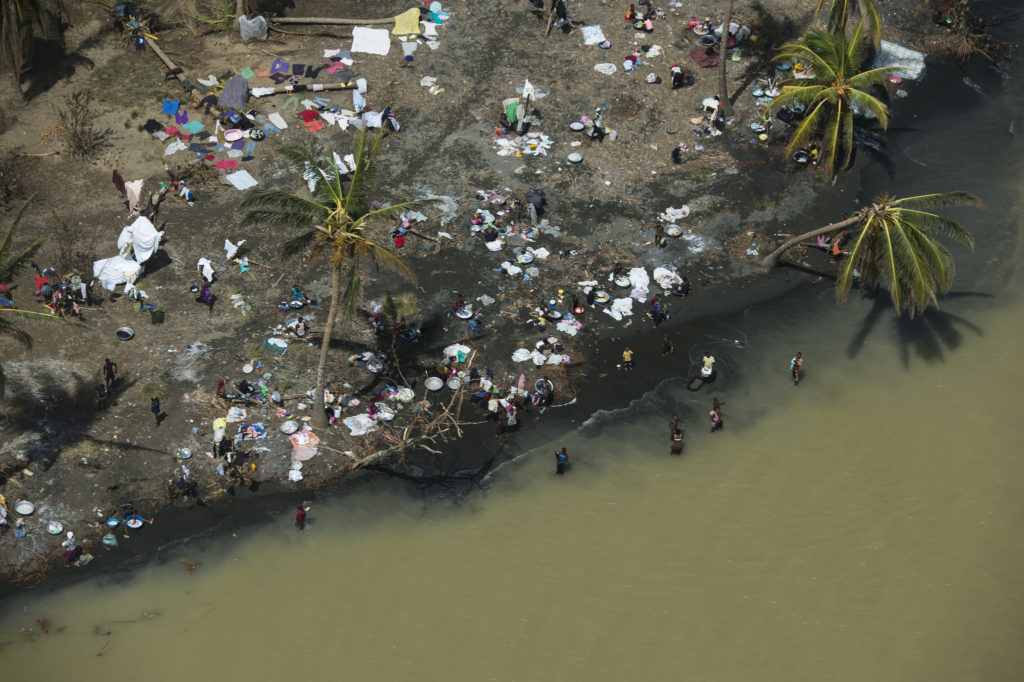 MARRAKECH, Morocco – One month after Hurricane Matthew killed more than 1,000 people in Haiti, many of the 1.4 million citizens who need humanitarian aid are still waiting for help despite a United Nations call for $120 million in recovery funds.

Yet the devastated country got an instant down payment on its rebuilding efforts from an insurance company based in nearby Cayman Islands.

The money came from a group called the Caribbean Catastrophe Risk Insurance Facility, which kicked in $23 million as soon as wind speeds roared high enough to trigger a “tropical cyclone policy” that Haiti took out in 2009. The Haitian government used the money to pay emergency personnel, “keeping the wheels of government turning,” according to a CCRIF statement.

Some insurers say this kind of policy can help manage risk and ease the economic pain of natural disasters as they become increasingly frequent thanks to climate change, which the Environmental Protection Agency expects to happen through the 21st century. Money comes much faster, insurers say, if it doesn’t require donor countries to scramble together an aid package, or disaster-stricken governments to issue a call for help.

“It’s an idea whose time has really come,” says Aaron Oxley, executive director of the international charity Results UK. “It is one of the most exciting things we’re doing in international development at the moment.”

Oxley says insurance money that lessens the impact of a disaster up front is four times more effective than relief funding later.

“So a drought that you could solve for say half a billion dollars ends up costing $2.5 billion dollars because you didn’t act fast enough,” he says. “You’ve eliminated a massive amount of suffering from the world, and you’ve set up all those families to hit the next growing season with all of their productive assets intact so they can get on with their lives.”

The process of getting insurance requires the countries to assess their risk. Verena Treber, project manager for German insurance giant Allianz, says that could spur investments in prevention measures, like planting mangroves along vulnerable coastlines or digging drainage ditches around farms in flood zones.

“It’s never better to clean up after. It’s always less expensive to think before and do some prevention,” says Treber.

But this new financial tool comes with challenges.

If Haiti’s cyclone policy had set the bar for a payout at a higher wind speed, for example, the country might have gotten nothing. And because it’s not practical for insurance companies to send claims adjusters to every home in Haiti, this kind of insurance works by looking regional data like rainfall and wind speeds. How exactly to set those metrics—and how to make sure vulnerable groups signing up for policies are on equal footing with the insurers they negotiate with—is an open question, especially in Africa.

In April, the president of Malawi declared a state of emergency when a severe drought decimated the country’s staple corn crop. After Malawi joined the African Risk Capacity, an African Union program similar to the risk pool that paid out in Haiti, Malawian farmers were eager to receive payments under their country’s drought insurance policy. But the insurer’s models and satellite data underestimated the severity of the drought, and money for suffering farmers dried up.

The African Risk Capacity eventually paid Malawi after a barrage of bad press. And since it started in 2015, ARC has paid $26 million to drought-affected countries in Africa before humanitarian aid could arrive. Its experience in Malawi, however, underscores a problem for so-called “sovereign disaster risk solutions.” Set the bar for payouts too high and people will suffer; set it too low and insurers won’t be able to gather enough money to prepare for extreme events.

Regional efforts like the ARC and the Caribbean Catastrophe Risk Insurance Facility attempt to thread that needle by expanding their risk pool—Zambia may have ample rainfall while Tanzania is parched, so nations can spread their risk around—but the uncertainty of climate models makes it difficult to keep that equation balanced. And when it comes to climate change, insurance is more useful for extreme weather events than for slow-moving catastrophes like sea-level rise and ocean acidification.

The simplest way to reduce climate-related suffering, of course, is to limit the amount of climate change that future generations have to bear. But a UN report released this month shows even the pledges made by 162 nations under the climate deal struck in December in Paris don’t add up to enough for the planet to avoid dangerous levels of global warming.

In the meantime, a growing number of insurance companies are offering financial tools to help the world’s poorest people defend against financial ruin in the wake of natural disasters. Led by Germany, the G7 group of nations (the United States, Canada, France, Germany, Italy, Japan, and the United Kingdom) hopes to increase the number of people covered by this kind of insurance from 100 million today to 400 million by 2020. The G7 governments have started setting up funds and working groups to make that happen, and major insurance companies are taking note.

Climate risk insurance is one of a slew of new financial tools being touted at the UN climate talks this week in Marrakech, Morocco. But according to Simon Hagemann of the German government’s Federal Ministry for Economic Cooperation and Development, the concept is transformational, if not entirely new.

“It’s basically rapid disaster financing,” says Hagemann. It may be a small part of an insurance company’s business, but it’s a way potentially to do good while doing well. And it’s good for appearances. “It’s somewhat for show,” Hagemann says, “but it’s also a real market that they haven’t been able to get involved with on their own.”

Unfortunately, for those in harm’s way, disaster risk management may be a growth market.

Since 1980 the United States has suffered more than $1 trillion of damage in weather-related disasters, according to the National Oceanic and Atmospheric Administration. Globally the cost of extreme droughts, floods and other calamities supercharged by climate change is expected to grow.