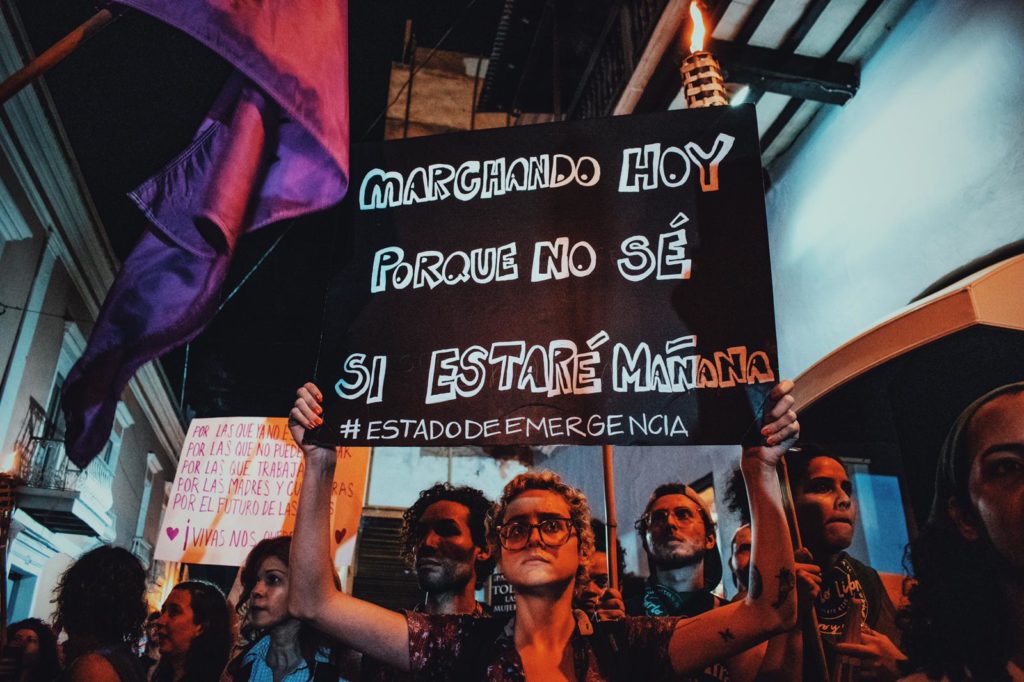 A woman holds up a sign that reads "Marching today because I don't know if I'll be here tomorrow #StateOfEmergency." (Photo by Gabriela Hance/Todas)

Some held their daughters’ hands; others held signs reading, “Peace for all women” and “Justice, respect and equity.” They joined others, many wearing purple as a symbol of resistance against patriarchy, transforming the marchers into a single color wave that descended onto San Juan. They chanted to demand a tally of how many women must be killed to cause an official acknowledgement, and reaction.

It was warm on the afternoon of Nov. 25, the International Day for the Elimination of Violence against Women, and the group, mostly female, marched for about 6 miles under the banner of “Mujeres en marcha” — “Women on the march.” For years, Puerto Rican feminist groups have loudly denounced what they view as the government’s inaction in addressing endemic gender violence. They demand the government declare a state of emergency in response to some of the highest rates of femicide in the United States and its territories.

Months earlier, Ricardo Rossello resigned as governor of the island after 889 pages of private chat were leaked to Centro de Periodismo Investigativo, where I work, exposing his administration’s misogynistic, homophobic and classist mentality, igniting public outrage.

Despite the swearing in of a new female governor, Wanda Vazquez, many Puerto Ricans see her government as more of the same, especially regarding the crippling austerity measures designed to minimize Puerto Rico’s $70 billion public debt, which was aggravated when financial institutions and investment houses helped structure the island’s bonds with high interest rates.

Vazquez’s administration has also failed to declare the requested state of emergency.

A woman was killed every week in Puerto Rico between 2014 and 2018, around when the protests began, according to a recent study conducted by two Puerto Rican public interest organizations.

These women-led protests are a continuation of the political rallies from last summer, when Puerto Ricans rallied on the streets in front of the governor’s house to demand Rossello’s resignation and transparency from their government.

During this period, democratic participation was strengthened by reclaiming public spaces throughout the island. In one July rally, for example, an estimated 500,000 people shut down one of the most important highways in San Juan for the “March of the People” — the largest public rally in recent Puerto Rican history.

The November rally began on La Milla de Oro (“The Golden Mile”), Puerto Rico’s financial district and where the island’s most powerful banks and the federal Financial Oversight and Management Board, known as “La Junta,” are headquartered. These institutions and people affiliated with them are implicated in the corrupt management of Puerto Rico’s public debt.

In discussing the economic crisis on the island, some of the women on the march told me that because they don’t own the debt, so they won’t pay for it. To them, the austerity measures imposed by both the Puerto Rico state government and the U.S. government-created bodies to address the economic crisis — just like the closing of more than 400 schools and the increased precariousness of health services — are a further act of mistreatment and marginalization, a continuation of the violence against women and other vulnerable groups on the island.

As they walked toward the governor’s house in Old San Juan, the protesters paid tribute to past victims of gender violence — women targeted, abused and killed by strangers or their own partners.

The march also questioned the discourse that punishes women for walking the streets at night.

In 2015, Puerto Rican singer Ivania Zayas was killed in a hit-and-run. A state investigator blamed her for walking alone at night. That kind of mentality restricts basic freedom and fails to blame the actual perpetrators of the violence, the sociocultural oppression they operate within and the lack of protections for women against that oppression. In a march of solidarity, the protesters are attempting to reclaim these streets.

Minutes after sunset, the protesters arrived near the Dos Hermanos bridge. The smell of fire from their torches drifted, interrupting the usual calm of Paseo Caribe, a high-profile commercial and residential district. The familiar sound of the Atlantic’s tide was replaced by political chants and music.

“The girls of our land want to be free to play,” sang Plena Combativa, a feminist group that performs folk music with lyrics that challenge patriarchy and gender violence, while also promoting the empowerment of women.

Members of the feminist organizations that led the “Mujeres en marcha” told me they were planning more rallies. Understandably, many citizens in Puerto Rico don’t want to wait until Election Day to have a say in politics.

Rafael René Díaz Torres is a Report for America corps member, covering government and public financial matters for the Centro de Periodismo Investigativo in Puerto Rico. This essay is part of a series called “On the Ground,” supported by The GroundTruth Project. Follow him on Twitter: @rafaelrened

A version of this story appeared on USA TODAY on January 7, 2020