Proposed Megaproject in Great Nicobar Island Could Spell Trouble for Its People, Wildlife 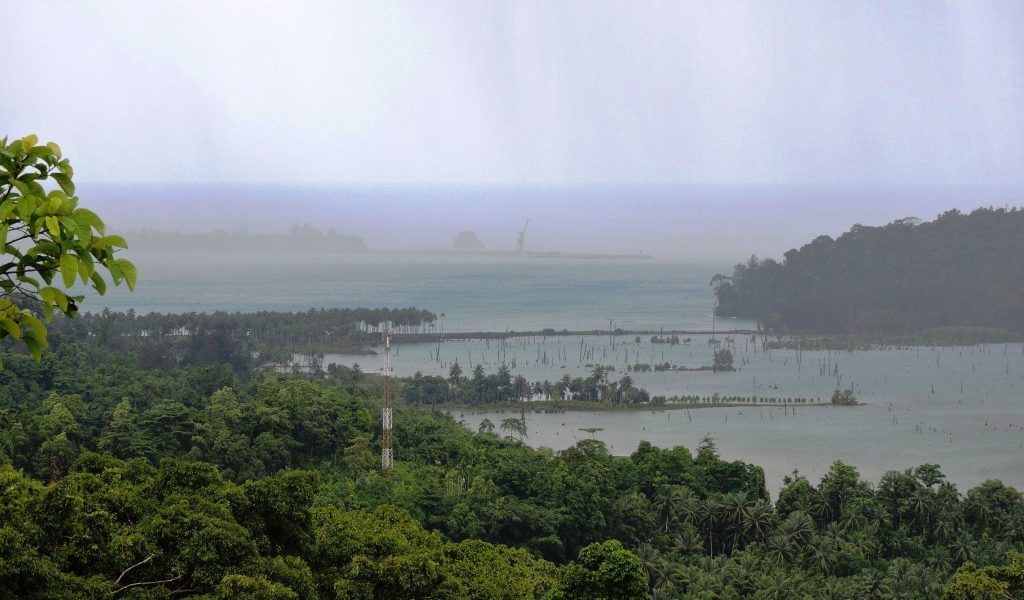 View of rainfall over the forest and adjacent sea from a watchtower of the Great Nicobar Biosphere Reserve, Great Nicobar Island, 2016. (Photo by: Prasun Goswami/Wikimedia Commons CC BY-SA 4.0)

Kochi: A proposal for a mega port in the Great Nicobar island in the Andaman and Nicobar could mean that both the island’s people and wildlife will be getting a raw deal.

The minutes of a meeting of the Expert Appraisal Committee (EAC) under the Ministry of Environment, Forest and Climate Change (MoEFCC), held on May 24, revealed that approximately 8.5 lakh trees will be felled for the Rs 35,000 crore port-township-airport-power plant project on the eastern coast of Great Nicobar Island.

Moreover, the project will reclaim 300 hectares from the ocean, affecting marine biodiversity, and will impact more than 1,700 people, including the indigenous Shompen and Nicobarese communities.

The proponents of the project have, however, recommended several mitigation measures to ‘compensate’ for these impacts. These include “consent in principle” that the rights of indigenous communities under the Forest Rights Act 2006 (FRA) will be upheld, and the intent to declare wildlife sanctuaries for species threatened by the project.

But these proposed mitigation measures are not mindful of the people or their needs, say social science researchers. While the island needs development, it is important to accomplish this in a way that will also uphold the cultural and ecological heritage of Great Nicobar and its people, according to ecologists.

The proposed mega infrastructure project on Great Nicobar Island involves the construction of a transshipment hub (the International Container Transshipment Terminal or ICTT) and three other interlinked projects: a greenfield international airport, a township and associated infrastructure, and a gas-diesel-solar power plant. These will come up on the eastern side of the Great Nicobar Island, including Galathea Bay.

They clarified that 8,52,245 trees will be cut for the project, as forest land amounting to 130 square kilometres will be diverted. Further, almost 300 hectares of land will be reclaimed by dredging the ocean; wildlife, including the giant leatherback turtle and the Nicobar megapode, a flightless bird endemic to the Nicobar islands, will lose critical nesting grounds along the shores of Galathea Bay; and more than 1,700 people will be affected due to the project, mostly of the indigenous Nicobari and Shompen communities.

Ironically, a golf course was also part of the proposed project, for which the EAC denied permission.

Proposed mitigation measures to compensate for these damages include coral translocation and reef restoration in Galathea Bay. Authorities plan to balance the loss of 12-20 hectares of mangroves here by ‘re-densifying’ existing mangrove patches and planting mangroves in non-forest areas (known as compensatory afforestation).

Noting that the projects and new roads that will be laid would affect the movement of shore-dwelling species such as robber crabs and megapodes, the EAC called for forest-seashore wildlife corridors (up to 500 m wide) linking the forests and seashore between the Campbell Bay and Galathea National Parks. The EAC also recommended canopy bridges and underpasses to ease the movement of other wildlife.

Mitigation measures also include intent to declare new protected areas, as well as the drawing up of monitoring and action plans to study threatened wildlife. For example, the administration has envisaged a Megapode sanctuary on Menchal Island (1.29 square kilometres), a Coral wildlife sanctuary near Meroe Island (around 2.73 sq km) and a 13.75 sq km leatherback turtle sanctuary at Little Nicobar Island.

In fact, the population of leatherback turtles in the Nicobar island complex is the largest between southeast Asia and Africa, according to Kartik Shanker, a professor at the Centre for Ecological Sciences in Bengaluru’s Indian Institute of Science.

“From this perspective, the beaches on Great Nicobar are critical for the species,” said the ecologist, who has been studying wildlife, including turtles, in the landscape for more than two decades. “If the transshipment port comes up, it will most definitely affect their existing nesting sites. But will the leatherbacks’ populations decline? We can’t really tell. They could start nesting at alternative sites nearby.”

To compensate for potential impacts, authorities are planning a multi-crore conservation plan for leatherback turtles. The Wildlife Institute of India will prepare a plan to monitor and track these turtles, and protect what will remain of their nest sites and habitat for the next decade. The Salim Ali Centre for Ornithology and Natural History (SACON) is to prepare a similar monitoring and conservation plan for the Nicobar megapodes.

The EAC also suggested that the Pemayya, Casuarina and Alexandria Bays on the western coast of Great Nicobar could be potentially developed as wildlife sanctuaries or conservation reserves, if studies establish these sites as suitable habitats and nesting sites for leatherbacks, megapodes and saltwater crocodiles, for “additional legal protection for these species”.

These proposed measures – including the declaration of wildlife reserves – are not mindful of people, said Manish Chandi, who has served as a member of the Research and Advisory Board of the Department of Tribal Welfare from 2011-2019 and has studied the links between local communities and the natural environment in the islands.

“They forget that there are people who have a larger stake and who are traditional owners and caretakers of those very landscapes they propose to designate as sanctuaries or whatever else captures their imaginations,” Chandi told The Wire.

These proposed sanctuaries are within tribal areas & their resource use & habitation areas. Have the islanders of Little Nicobar ever been consulted on these? Definitely no. Cause for more problems.i have worked in this space for ~20yrs & can say it requires more than a proposal

According to Chandi, the port project will affect both the Shompen and the Nicobarese. The Nicobarese village of Chingenh lies directly within the area of influence of the ICTT. Chandi said that after the tsunami of 2004, villagers were moved around 43 km away near Campbell Bay, but they always wanted to return.

Though the Nicobarese have been requesting the administration since 2005 to help them return to their original homelands and territories, this has not happened yet. The Shompen and Nicobarese have been vocal about not wanting to suffer the impacts of such large-scale projects in their territory and have voiced the same to the local administration and the Niti Aayog, but the project in its current form does not incorporate their requests.

Moreover, the administration’s ‘consent in principle’ to implement the FRA is “vague”, said Chandi. People have not been given rights under the FRA here yet, though there have been ample opportunities to do so. The unique Andaman Nicobar Protection of Aboriginal Tribes Regulation, 1956, also protects the rights of these communities.

“If the FRA couldn’t find space in all these years for these communities with such high legal regards, it just goes to show how shallow the ‘consent in principle’ actually is,” Chandi said.

Is the port economically viable?

While the project proponent has applied for environmental clearances for the project (they have already applied to the MoEFCC to divert forest land), a recent development raises the question of whether the port will actually be economically viable.

The proposed ICTT has been pushed forward as an alternative to the transshipment ports of Colombo in Sri Lanka, Port Klang in Malaysia and Singapore. However, a week ago, the Singapore port announced a $14 million plan to modernise facilities.

As per some reports, this will include increasing infrastructure (doubling existing space) and improving technology (it will be the world’s biggest automated port by 2040). Could the modernised Singapore port capture more vessels than the ICTT in Nicobar?

Competition will be an issue only if the ICTT attracts vessels of sizes that also use the Singapore port, “such as Ultra Large Container Ships,” said Deepankar Sinha, professor at the Indian Institute of Foreign Trade, Kolkata, who studies trade and port management, among other aspects. ”\

Ultra Large Container Ships or Vessels are those with a TEU (twenty-foot equivalent unit) of more than 10,000. The proposed ICTT on Great Nicobar Island – in its present design, as per the draft proposal for the project and the EIA – can berth vessels of up to 24,000 TEU (categorised as ‘Super Post-Panamax’ vessels).

Sinha confirmed that such vessels fall under the category of Ultra Large Container Vessels.

“There can be competition if the demand for vessels increases, but there can also be complementarity between ports if the vessels are limited in number,” he said.

However, vessel numbers have increased by around 8% annually in the Singapore port alone, as per its latest estimates. And as vessel numbers increase, the modernised Singapore port could compete with the proposed port on the Great Nicobar Island, unless of course, the Indian port offers facilities on par with those offered by Singapore, the world’s busiest container transshipment hub and the largest publicly-owned port.

‘Missing the woods for the trees’

It is undeniable that the Andaman and Nicobar islands need development, Shanker said. “But it has to be balanced with the environmental concerns.”

“What kind of development will the transshipment port bring? Will it be the kind that the people of the area need, such as more access to education or better livelihoods? Will it bring unjustified environmental costs?” he asked.

There’s also a larger issue of the biodiversity of the island itself, of which leatherbacks are just one of the iconic species, Shanker added.

The Nicobar island complex is special because it is the only region in India that is part of the Sundaland biodiversity hotspot (which also comprises Borneo and Sumatra in Indonesia). The southernmost tip of Great Nicobar is just around 200 kilometres, as the crow flies, from the northernmost tip of the Aceh province in Indonesia. The island, therefore, has fauna and flora that you won’t find elsewhere in India.

So focusing on specific species alone is not wise, Shanker added. A 13-sq km sanctuary for leatherbacks is such a small area; maybe it’s enough to cover one leatherback nesting beach, but what about everything else?

“To me, in a sense, saying ‘we’ll have conservation plans for leatherbacks, or megapodes’ is somehow missing the woods for the trees,” he said. “Much larger parts of Great and Little Nicobar need to be shielded from the impacts of development, as also the people and their culture.”