The Life and Times of an Afghan police officer 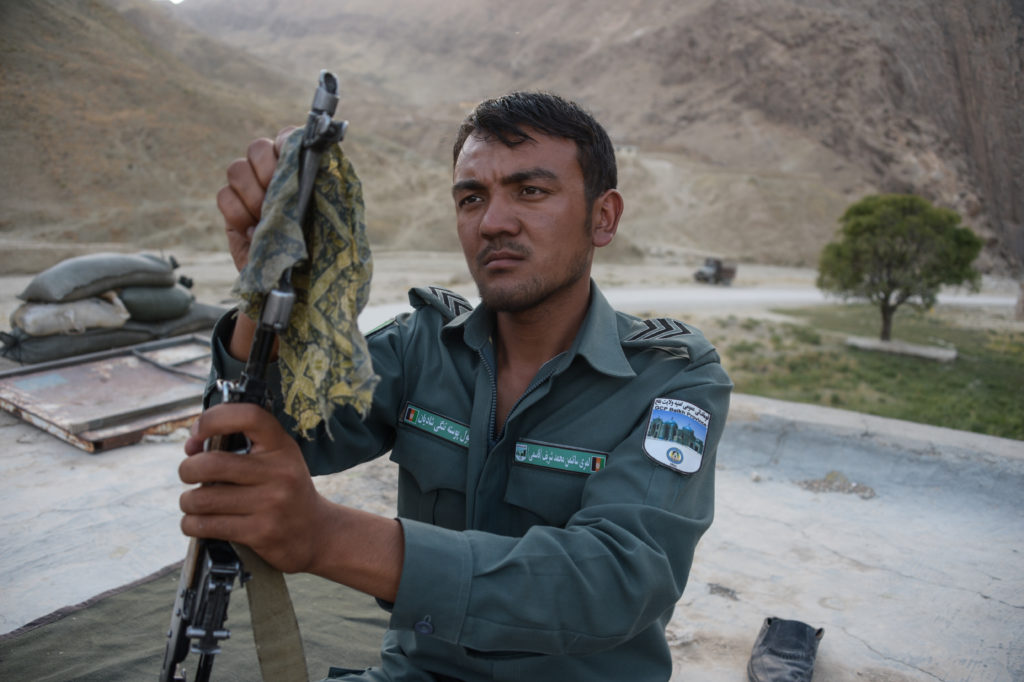 Afghan photojournalist Farshad Usyan developed an interest in photography after his brother Qais started working for AFP in 2010 and he would use Qais’ cameras for fun. Two years later Qais died from a still-unsolved poisoning, and Farshad was asked by AFP to continue his brother’s work.

Passing the camera from a fallen photographer to his brother is a something of a tradition in the wire services. For example, in 1965, the AP’s Horst Faas hired and trained a young Vietnamese photographer named Nick Ut after his brother Huynh Thanh My was killed. Seven years later, Nick would win the Pulitzer Prize for his iconic photograph of a young girl burned by napalm.

Farshad, 22, hails from the northern city of Mazar-i-Sharif and is completing his final year at the medical university there. Continuing to file images for AFP, he recently began working with The GroundTruth Project under my mentorship. GroundTruth’s core mission is training young journalists, and during the past few years I have been the beneficiary of that mentorship in Afghanistan, working closely with GroundTruth’s director of photography Gary Knight. As my work there comes to a close, I am passing GroundTruth’s torch to Farshad.

In order to improve his photography, Farshad reads books, photo websites and looks at other photographers’ work online. Aside from his late brother Qais, Farshad’s favorite photographers include James Nachtwey and Josef Koudelka. Although he will graduate from medical school soon, he is motivated to make a career photographing Afghanistan.

Farshad is a tremendously talented image-maker, and is very good at making beautiful frames from ordinary moments in people’s lives.

For his first assignment for GroundTruth, Usyan spent several days photographing a police checkpoint in Charkent District, just south of Mazar-i-Sharif, to give a sense of what daily life is like for a young police officer named Mohammad Sharif.

“Through my pictures I want to show people how I feel and the way I look at the world,” says Usyan.

Mohammad Sharif, an Afghan National Police officer, lays his AK-47 down and offers afternoon prayers on a mountain near Mazar-i-Sharif.  Two other police officers guard him while he prays.

Preparing for his prayers, Sharif washes his hands and face in a ruined building near Mazar-i-Sharif. This former boys school was destroyed during the Soviet war.

Afghan police officer Mohammad Ali looks down at the village below the checkpoint he guards in the mountains south of Mazar-i-Sharif.  In the remote districts of Northern Afghanistan, policemen like Ali are the Afghan government’s only regular presence, and bear the brunt of the Taliban’s violent attempts to control the villages and roads.

A merchant traveling from a remote mountain village to Mazar-i-Sharif to trade goods, crosses the road near Mohammad Sharif’s checkpoint.

Sharif shakes hand with a jeep driver after checking his vehicle at his checkpoint. The illegal import of vehicles with fake number plates is a major security issue for Afghan police.

Sharif spends his free time reading books inside a checkpoint in southern Balkh Province. Afghan police are trained in basic literacy to help them deal with legal issues and military tactics.  About 45 percent of adult males in Afghanistan are literate, one of the lowest rates in the world.

In Charkent Village, south of Mazar-i-Sharif, Mohammad Sharif pens a handwritten letter  to the Afghan Police headquarters in Balkh, asking for permission to start an operation against the Taliban.

Mohammad Sharif oils and adjusts his AK-47 in a rural southern district of Balkh, which borders Uzbekistan and Tajikistan. Remote area of Afghanistan near international borders tend towards instability and violence.

As a trader on horseback approaches his checkpoint, Sharif keeps his machine gun ready while he disassembles and cleans his rifle. Sharif’s police unit does not get regular intelligence support from Afghanistan’s central government, leaving them vulnerable to sudden attacks from the Taliban.

Police officers in Balkh report to their headquarters over their radio.

Mohammad Sharif feeds bread to a dog in a ruined school located in a remote area of Northern Afghanistan. Animal rights in Afghanistan fall well short of human rights, but police and soldiers at remote checkpoints often enjoy animals’ company.

Afghan police check a man on a roadside in a village in south of Mazar-i-Sharif. Security risks get higher at night due to lack of electricity and lack of night vision equipment.

Sharif eats a lunch of melon and naan at his checkpoint. Because the central police office cannot deliver food and supplies in a timely manner, Afghan police often go hungry and fight insurgents on empty stomachs.