Problems in the US immigration court system are seemingly endless 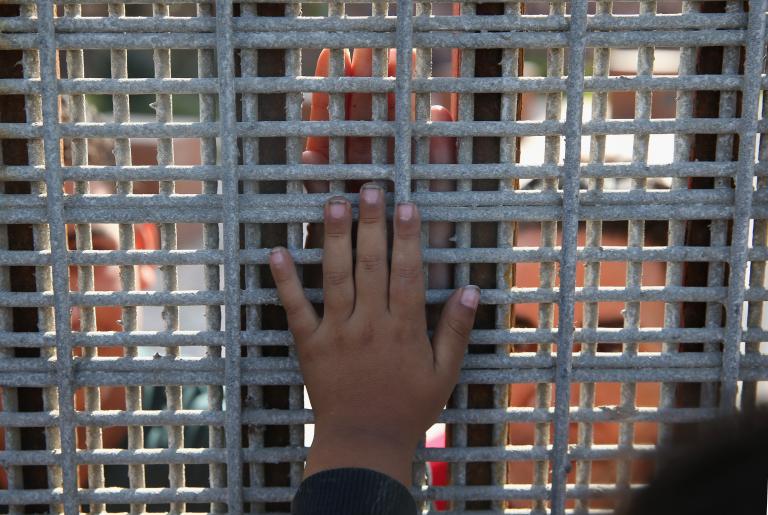 SAN DIEGO, CA - NOVEMBER 17: Family members reunite through bars and mesh of the U.S.-Mexico border fence at Friendship Park on November 17, 2013 in San Diego, California. The U.S. Border Patrol allows people on the American side to visit with friends and family through the fence on weekends, although under supervision from Border Patrol agents. Access to the fence from the Tijuana, Mexico side is 24/7. Deportation and the separation of families is a major theme in the immigration reform debate. - (John Moore/Getty Images)

It’s been more than a year since he ended his month-long journey across the border from Chalatenango, El Salvador, before being caught by federal agents near Reynosa, a Mexican city on the jagged cusp of Texas. Like most of the tens of thousands of minors making the same unrelenting journey these last years, Haido was looking for asylum as he fled the rampant violence of local gangs, or las maras, that plague El Salvador. Alongside scores of other “unaccompanied minors,” he was sent to a detention facility in Chicago for weeks. His mother had arrived in the country six years before, and she’d been pooling money to fund a coyote—a smuggler that would get him across the border. Now, he was calling her from an immigration jail.

What Haido didn’t know then was that he was about to become one of the lucky ones.

Dressed in a wrinkled, long-sleeved button-down shirt, he is baby-faced, and at 18 years old, just barely a man. As the interpreter explains his rights, which in immigration court are tightly restricted, he nods meekly, staring straight ahead as an expressionless attorney representing Immigration and Customs Enforcement (ICE), too, states his name.

Have you been arrested? Committed any crimes? The judge asks. No and no, he replies.

Like the dozens of cases before him that morning, it’s all over in a matter of minutes.

The ICE lawyer’s job is to quickly get every defendant slapped with an order of deportation. Because immigration courts are administrative and not criminal, the defendants have no automatic right to legal counsel.

Where Haido’s story differs is that the judge is granting him what’s called an administrative closure. At least for now, he’s off the hook.

A good dose of twisted irony resides behind Haido’s good fortune. He arrived in the country just a month before 2014, the year marked by “the border kid crisis,” when a record 68,000 other Central American minors surged to the border and made screaming headlines.

Now, “he is considered low priority for the government,” says his lawyer, 45-year-old Delfino Varela Jr. “His case got put to sleep.” In other words, in its rush to process and possibly deport the youth that came here last summer, the U.S. government has downgraded the priority of dealing with those who came before. Even though Haido and those who came here six months after him share identical circumstances, they are treated with different standards, and Haido got the long end of the stick.

It was one of the best possible outcomes for someone like Haido, Varela added. Sitting in the waiting room, hands outstretched and clasped, Haido talks about finishing up twelfth grade, and wanting to go to college. The high school he attends in Chino, where he now lives with his mom and sister, has a diverse mix of Mexicans and Americans, and even until now, he tells us he has never really felt afraid of being deported. Is he happy? “Si,” he says, smiling.

But Haido’s newfound sense of security doesn’t necessarily mean he’s become more trusting. Asked if he’d be willing to share his story, he glances hesitatingly at Varela, who replies that it’ll bring more awareness to immigration. Something he, too, desperately wants.

The ability to have a legal advocate has always been deemed a luxury by the undocumented. Unless you have money to hire a lawyer (a rare circumstance for a border crosser, young or old), or can somehow find one of the Good Samaritans who will work pro bono, you go into the courtroom alone, up against a government prosecutor. More than 80 percent of immigrants in detention are unrepresented, and even among those who are not detained, the proportion only falls to 60 percent, according to studies cited by the American Bar Association.

Finding representation is only the first part of the legal puzzle. Even with a lawyer, you are arguing against a system that makes no pretense of being fair to both sides. As authorities scramble to preserve courtroom time for higher priority cases, frenetic “rocket docket” hearings like Haido’s have increasingly become the norm, some being decided upon in an average duration of seven minutes. In some jurisdictions where the defendant is in custody, these hearings are conducted by remote video hookup. During the height of the immigration media frenzy last year, from a period of July to October, more than 800 hearings were held a week. The nation saw a total of more than 11,000 in that three-month period. And, according to Politico, of the 1542 deportation orders issued, 94 percent of the defendants were minors with no lawyer.

Of all things, the Obama administration also decided to combat immigration by ordering the detention of minors on the basis of national security. Calling on Matter of D-J, an immigration decision written two years after 9/11, officials argued that children crossing the border posed as a threat to state security by virtue of their illegal entries, and as such, detaining them was necessary in deterring “an active migration network.” Little wonder that some immigration reform advocates deride the court system as little more than conveyor belts to deportation.

This year, there will continue to be a breakneck pace in processing the mounting backlog of immigration hearings. The latest Department of Justice report puts the number of open cases at more than 428,000, a confounding increase compared to the 350,000 on dockets last February.

A large part of what these expedited proceedings have done is further strain the mostly overworked, mostly underpaid attorneys representing immigrants. People like Varela, who keeps himself going by the reminder that his work can improve a migrant’s chances of achieving legal status by up to nearly nine times.

Varela is also driven by a congenital sense of social justice. His late father, Delfino Sr., was a leading Latino activist in the movimiento period of the ’50s and ’60s.

A few weeks later, as he’s perched once again in the waiting room of the immigration court with another Salvadoran family, Varela hands his card to an elderly woman who approaches him.

At any given time, Varela’s caseload runs up to 200, a rich number contrasted with his ramshackle office in the East Los Angeles barrio known as Boyle Heights. It’s a two-story house with stained white pillars, where his cousin Lela (also one of his assistants) lives in the back, and lodgers occupy the upstairs. Like the majority of the nation’s immigration lawyers, he works on a reduced cost basis and negotiates payment plans for each case. Billable hours don’t exist. The only signs of a law office are two blue and white signs out front projecting the scales of justice. “Delfino Varela, Attorney.”

Managing such a heavy caseload means there’s greater tendency for repetition, especially when it comes to clients from the same country, says Varela, who himself was born to a Costa Rican mother and Mexican father. Stories of gang violence from young Central Americans, for instance, begin to meld together after a while, making it easy to forget smaller personal details.

“Sometimes I’m just kind of on autopilot,” he says. “And sometimes the judge will ask me something I should know, and I’ll be like, ‘Oh shit, I gotta review. Something like you know, ‘How old are the kids?’”

Even with his frantic and sometime discombobulated juggling, Varela thinks he serves clients better than many much less experienced immigration lawyers who are called into court at the last minute, whether it’s a pro bono attorney on rotation from a reputable firm or someone they just met in the hall. “It could be anybody, someone they’re just meeting for the first time,” says Varela.

At that moment right before walking into court, however, that is all the immigrants want: someone. Anyone at their side. “The judge always asks, every single time, “Do you want this person to represent you?’ And they’ll always say, ‘Yeah.’”

These strangers-turned-advocates can do a lot of damage, he adds.

On some mornings, several of Varela’s cases are called in at once. Call times are only listed as the start of each court session—either morning or afternoon, making it difficult for attorneys to allocate their time and immigrants to know how long they’ll be waiting.

As a result, it’s often a humiliating situation for defendants who are stood up in the courtroom. While it’s hard to tell what’s happened with each individual, the scheduling doesn’t make it easier, says Varela, who one morning scurried into the room from another hearing.

And they aren’t the only ones frustrated. As a man who has driven in from the town of Perris, about 60 miles from the court, explains to the judge his arrangements to meet with his lawyer, a Mr. Martinez, at 9:30, Judge Frank M. Travieso almost seems to shake his head.

When another immigrant from the Dominican Republic, Roberto Vladimir, makes his way up to the stand, the judge tells him that his lawyer has called in sick at the last minute.

Whether you choose to stay with him is up to you, says Travieso. But next time, come back with a lawyer.

It’s a statement he’ll repeat to other immigrants, over and over. Why, then, do people keep coming back alone?

Critics argue that immigrants who fail to provide proof of their attempts to find representation at the request of the court are strategizing, in the hopes of having their cases reset to buy more time.

Varela shakes his head. “Some of the time, you’ll see that, but most of them aren’t crafty enough to actually think like that. A lot of times, it’s just apathy,” he says.

Because so many of the immigrants are minors, or people who arrived in the country at young ages, “they consider themselves already American,” he says. “For some reason, they think it’ll work out. I’ll see a lot of them, the judge will tell them, ‘You may think you’re American, but you’re not.’ The main thing that’s confusing, is they think, ‘Oh, I’m before a judge. So if this judge likes me, or if I show this judge I’m a good person, then he’ll let me stay.’ But the judges, their hands are tied too.”