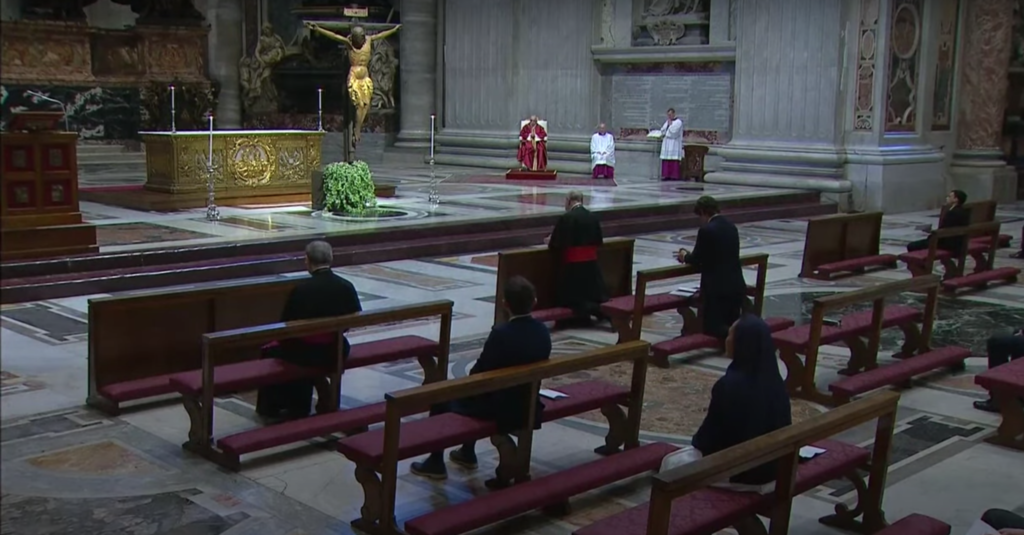 Pope Francis presided over the Good Friday celebrations in a nearly empty Peter’s Basilica on April 10, 2020. The Mass was live streamed through YouTube. (Screenshot by GroundTruth)

ROME — For the first time in modern history, Italians will celebrate Christ’s resurrection remotely, with priests delivering liturgical Easter celebrations to the COVID-stricken nation on Facebook and other digital streaming platforms.

The Catholic Church on March 27 announced its Holy Week liturgical events were to take place without a single worshipper present. Instead, all celebrations would be live-streamed for anyone to access.

In that one fell swoop, the Vatican overhauled centuries of religious tradition and initially left Italian Catholics at a loss for how to mark the religious festivity.

“Then, numerous priests and even lay people of faith gathered up the courage to move onto digital platforms at this difficult time, and we are now seeing a multitude of Catholics showing great communicative talent,” said Father Daniele Restelli, a parish priest in Italy’s northeastern Friuli Venezia Giulia region. “It’s important, however, to bear in mind that faith, like any friendship or a sentimental relationship, cannot survive on Facebook alone.”

Father Restelli joined forces with three other local priests to celebrate Mass on social media. His local city council also posts his daily greeting to residents on its website every morning, in a bid to boost morale.

To date, the country has suffered the loss of 18,849 people to coronavirus since the crisis emerged on February 21, the highest death toll in the world. It currently has 147,577 confirmed cases, the third-highest figure after the U.S. and Spain.

“Today, industrialized nations are having to come to terms with what is an unknown life, with no preparation whatsoever. Clearly this causes profound discomfort to a consumeristic society like ours,” Rome-based Father Giulio Albanese warned. “This is the most efficient Lent that could be bestowed upon us, as we are living times of epochal change.”

In such uncharted times, parish priests have gotten creative with worship, holding services outside and even printing out selfie photos of regular churchgoers and propping them on the pews before streaming service to their followers.

The lockdown has “unleashed the pastoral creativity of many priests, that’s for sure,” said Father Valentino Cottini, a professor at the Pontifical Institute of Arabic and Islamic Studies. “There are priests that have taken to celebrating Mass on rooftops for those that are in nearby buildings, with faithful attending at windows and on terraces.”

Rome resident Gianandrea Sandri plans to follow Pope Francis’ televised Easter Sunday Mass from his Rome apartment, where he is currently in lockdown with his wife and daughter.

He anticipates longing for the “the traditional Easter atmosphere, which is lovely due to the very particular moment Easter represents,” but says it’s “unthinkable and extremely dangerous to want to open up churches and hold Mass as if everything were normal. Churches would become hubs of contagion at a time that everyone has been locked up at home for over a month in a bid to prevent the spread of this deadly virus.”

The new televised and digitalised Mass may be a potential draw, some say, for returning lost sheep to the Catholic flock.

“In a world where television reigns supreme in people’s lives 24 hours a day, people don’t automatically switch channels when all of a sudden they find St Peter’s, the mother of all churches, on the screen in front of them,” said Sister Lilliana Ugoletti of the Canossian Foundation, a non-profit Catholic organization that runs hospital and school charities in many nations.

“Quite the opposite,” she said. “Even those distant from the church, or unbelievers, look on with curiosity and expectation as Pope Francis’ daily message reaches out to the entire world.”

Traditionally, during the “Settimana Santa” Holy Week in Italy, worshippers begin a seven-day observance with Palm Sunday’s blessing of the palms, followed by a Via Crucis (Way of the Cross) devotion at the iconic Colosseum, followed by Easter Sunday Mass in a packed St. Peter’s Square and the pope’s Urbi et Orbi blessing. Churches across the Catholic nation typically hold services in this week throughout the day and stay open late into the evening.

But the way Palm Sunday unfolded this year was a historic first, a taste of what the rest of the week would hold. Pope Francis celebrated Mass in an almost empty St. Peter’s Basilica and the handful of congregants gathered in the pews kept a safe distance from one another.

The Via Crucis devotion, as well as Easter Mass, is scheduled to take place in St. Peter’s Basilica with no crowds present.

“This evening I have the chance to enter your homes in a different way than usual,” Pope Francis said in a video message sent last week to prepare the world’s 1.3 billion Catholics for the extraordinary Easter celebrations. “Thought and spirit can go far with the creativity of love.”

Creativity abounds among priests across Italy, many of whom celebrated Palm Sunday from rooftops and bell towers to allow people in surrounding buildings to open their windows or stand on balconies and partake in the Mass. In one instance, however, in Rome’s Tor de’ Schiavi neighborhood, police were forced to intervene and break up a faithful group who had gathered on the street below, contravening social distancing regulations.

Italian newspapers have reported cases of this happening in many towns and cities, including on the island of Sardinia and in the central region of Umbria, as well as Caserta, near Naples, and in Livorno and Turin, in the north. In many of these cases, the priest and attendant worshippers were fined, and criminal charges were filed against them for contravening the strict lockdown restrictions.

In this climate of uncertainty and deteriorating morale, Milan’s Duomo Cathedral, which has been closed for religious ceremonies since the start of the coronavirus outbreak, will host a live-streamed concert on Easter Sunday, “Music for Hope,” by world-renowned opera singer Andrea Bocelli. Bocelli will be alone in the deserted cathedral for the event, accompanied only by an organist and the technical streaming team, though millions of people around the world are expected to watch his performance of Ave Maria.

Father Cottini heeds, though, that while remote worship is useful in the era of COVID-19, this type of participation is a stop-gap measure, and not the real thing.

“There are opportunities to participate, but they aren’t actually a true substitute for taking part in a religious Catholic service. Catholic sacraments require the physical presence. Think of baptisms, with the priest baptising the baby, think of confessions that require both the priest and the individual to be present.”

But the inevitable vulnerabilities of contemporary society’s globalism and interdependence, exemplified by the indiscrimination of the coronavirus, will continue to present challenges to the world, the Church and those it leads in faith.

“We are living in a very particular time, of which there is no precedent since World War II,” said Father Albanese. “It questions the very nature of our modus vivendi, of the way that we live.”