Prepare To Fall Ill, the Climate Crisis Has Come 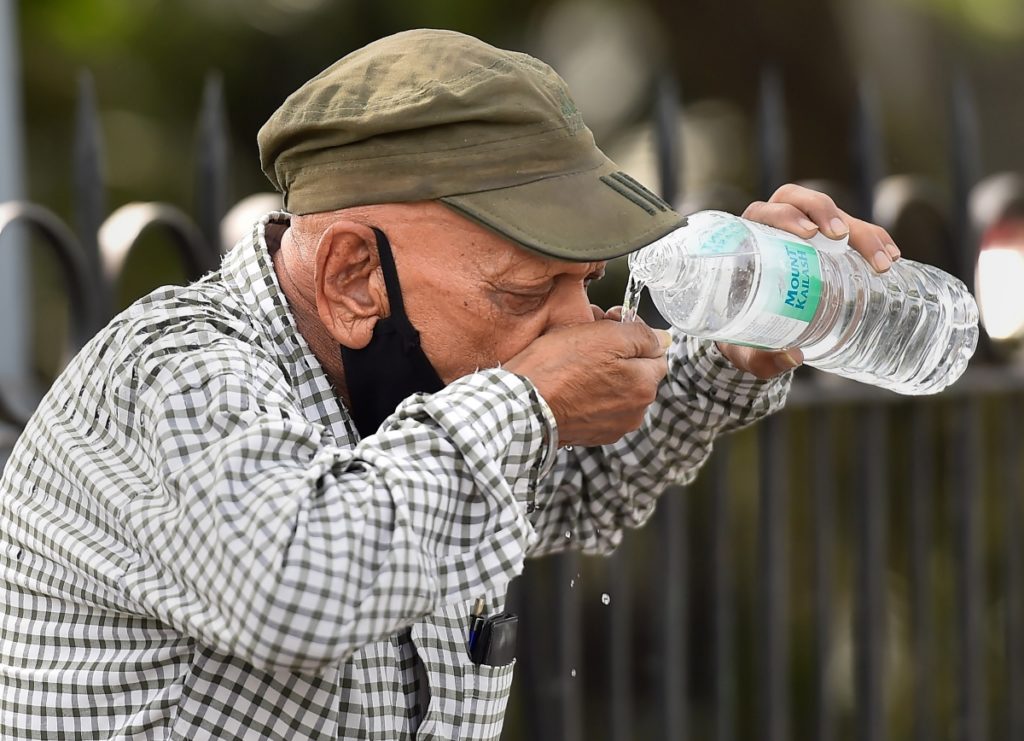 A pedestrian quenches his thirst on a hot summer day, at Cannaught Place in New Delhi, April 24, 2022. (Photo by: Kamal Singh/PTI)

The primary cause of the climate crisis – of which severe heat waves are one symptom – is the very high concentration of carbon dioxide and other greenhouse gases in the atmosphere. These gases are put there by a variety of human activities, from the combustion of fossil fuels to land-use change. Alongside the afflictions to the planet, the ‘Countdown Report’ also tracks the consequences of these emissions for human health.

For example, in India, biomass accounted for 61% of household energy in 2019 and other fossil fuels for another 20%. But while the report didn’t estimate the number of deaths directly attributable to the use of solid fuels for cooking, it was mindful of the health hazards.

“With this high reliance on dirty fuels, average household concentrations of particulate matter [in India] exceeded the WHO recommendation by 27-fold nationally and 35-fold in rural homes,” it said. Particulate matter could refer to both PM2.5 and PM10 particles, although the former is more hazardous to human health. The WHO limit for PM2.5 is 5 µg/m3 indoors and outdoors.

These findings echo a 2020 report authored by scientists at the Indian Council of Medical Research (ICMR) plus other independent experts. It had noted that the fraction of the population using solid fuels for cooking in India in 2019 was 56.3% – signalling the presence, detected or otherwise, of a respiratory illness crisis.

The Indian government’s primary response to this has been the Pradhan Mantri Ujjwala Yojana floated in 2016. In this scheme, the Indian government promised to distribute LPG cylinders to 5 crore women of ‘below poverty line’ families, at a total cost of Rs 8,000 crore. But the scheme seems to have fallen flat.

After the ‘Countdown Report’ was released, UN secretary-general António Guterres spoke in favour of “massive, common-sense investments in renewable energy and climate resilience” and asked G20 countries – a bloc that leads the world in consumption and emissions – to lead the way.

But a special focus on India is warranted. The country has the world’s fourth-highest fossil fuel subsidies as well as whose renewables push has prompted concerns about whether ‘green energy’ is really equitable.

According to the ‘Countdown Report’, India’s fossil-fuel subsidy bill was $34 billion – or Rs 2.79 lakh crore – in 2019 alone. This also presents a tension. On the one hand, the Indian government has contended at multilateral fora that as an economically developing country, its contributions to historical emissions are negligible, and thus India should be allowed to emit more before cutting down in order to lift millions out of poverty. On the other, the government has progressively weakened environmental safeguards, destroyed livelihoods and has taken only nominal steps towards ensuring a just transition away from fossil fuels.

Against this background, the ‘Countdown Report’ highlights a crucial part of a just transition – healthcare, well-being and quality of life – and where India stands on it.

In fact, even its renewable energy push has had adverse health consequences. The government said in the Lok Sabha in July 2022 that, in line with Prime Minister Narendra Modi’s commitment at COP26 last year that India would install 500 GW of power generation capacity from renewable sources by 2030, the government had already installed 167.68 GW by June.

However, the installation of solar and hydroelectric power infrastructure has degraded rivers and arable land, appropriated crucial water resources, uprooted trees and – inevitably – significantly diminished the quality of life of the people who depended on these resources.

So decreasing our reliance on fossil fuels alone won’t fix the climate crisis. The ‘Countdown Report’ highlights this in another way: a warming world is proving increasingly conducive to the survival of Aedes aegypti mosquitoes, which transmit the virus that causes dengue. As a result, according to the report, the number of months suitable for dengue transmission has increased by 1.69% from 1951-1960 to 2012-2021. That’s around 93 days a year to 156 days a year today.

In his last few press briefings, WHO director-general Tedros Adhanom Ghebreyesus has also expressed concern over the rising number of cholera cases as well. Cholera is a water-borne disease and often spreads in outbreaks after floods – like Assam, Karnataka and Uttar Pradesh in India and Australia, Canada, Germany, Greece, Pakistan, the Philippines and Venezuela have already suffered this year.

The unprecedented rise in cholera prevalence prompted international health organisations to ask countries to adopt a one-dose regimen of the cholera vaccine instead of the usual two, to ensure more people are vaccinated at least once instead of fewer people being vaccinated twice.

Among other factors, Ghebreyesus blamed the climate crisis – and the ‘Countdown Report’ has agreed:

“Although inadequate sanitation is the main enabler, climate conditions are increasingly favouring the survival of Vibrio cholerae in natural waters, keeping an environmental reservoir and favouring its spread. …

Deploying an ecological niche model, this indicator estimates that an additional 3.5% of global coastal waters have become suitable for the transmission of cholera since 2003-2005.”

But cholera and dengue aren’t the only threats: we’re at increasingly greater risk of other contracting diseases as well because the climate crisis will affect our nutrition also.

Per the ‘Countdown Report’, the duration of the maize growth season dropped by 2% until 2019, compared to what it was between 1981 and 2010; similarly the seasons of rice and winter wheat have each become shorter by 1% in India. This in turn means lower yield, more hunger and eventually  the health of individuals.

Farmers can increase yield by planting more crops and/or use increase their chemical inputs, but both measures are likely to damage the local soil and water and, in the long term, also contribute to lowering the quality of life.

Crop yield as well as livestock are also affected by heat waves, drought and wildfires.

Kumar also said the ‘Countdown Report’ “needs to be looked at in sync with other reports, including the latest IPCC report that suggests that extreme weather conditions are worsening water scarcity and stress, [increasing] losses in crop production, disrupting cities and altering ecosystems in the Indian subcontinent.”

And as with mosquito-borne diseases, the ‘Countdown Report’ read:

It also found that relative to 1981-2010, the (self-reported) food insecurity worldwide had increased 3.7 percentage points by 2020, which is about 98 million more people experiencing “moderate or severe food insecurity” – thanks to more frequent and more intense heat waves.

The broadest response expected of countries to these twin, and inseparable, crises is to draft and adopt a health and climate plan. But according to the ‘Countdown Report’, only only 49 of the 95 countries that the WHO surveyed in 2021 had such a plan. And of the 49 with a plan, more than half had ‘low’ to ‘moderate’ implementation. India a plan but the WHO hasn’t assessed its implementation.

With inputs from Vasudevan Mukunth.