ON THE GROUND WITH USA TODAY

Poverty and hope battle in the hollers of West Virginia 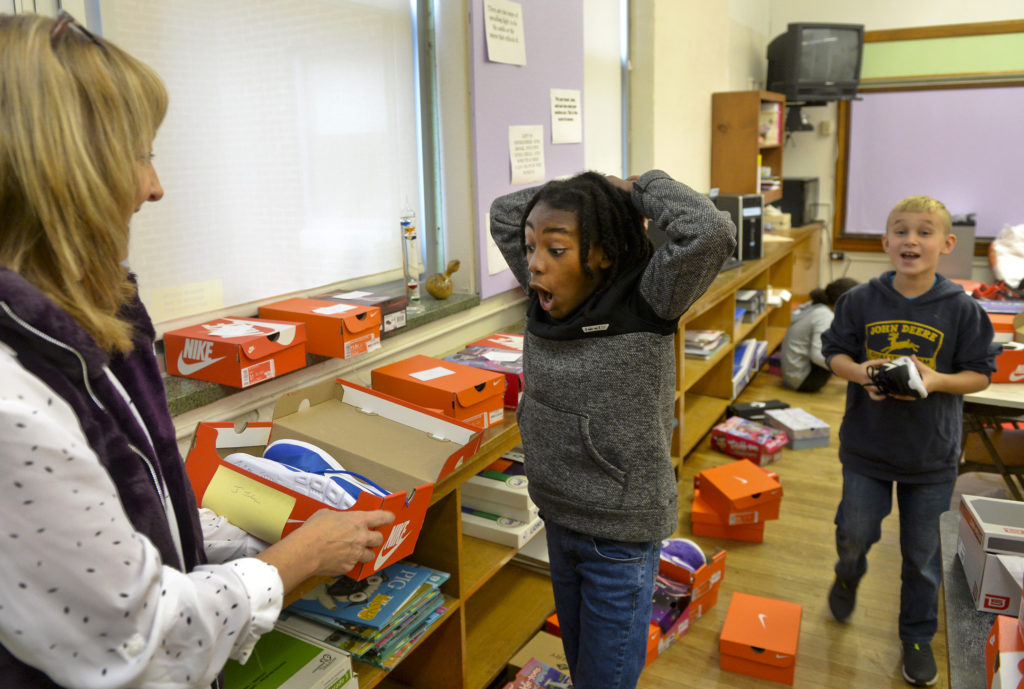 Third-grader James Johnson of Charleston, W.Va., receives a new pair of shoes. The shoe drop event surprised each of the elementary school’s 200 students, many of whom were identified as low socio-economic status, with a fresh pair of tennis shoes. (Photo by Kenny Kemp/Charleston Gazette-Mail)

CHARLESTON, WV – Last June, I was dispatched home to West Virginia as a Report for America corps member, to cover poverty for my hometown newspaper, the Charleston Gazette-Mail.

Our corner of Appalachia is rooted in it –think black and white images of Lyndon B. Johnson’s “War on Poverty”–and today, West Virginia remains one of the poorest states in the country, where 1 in 5 children struggle to access food. The history and policy failures here–our vulnerable children, cyclically disadvantaged–are particularly complex in a place where despair is often found lingering in the damp air between its rolling hills, in people who can’t “just pick up and leave,” as outsiders advise, or who simply object to doing so.

The story of West Virginia’s entrenched indigence is often told in data points, commonly landing the state at or near the top of ominous national rankings: worst health, worst education levels, worst employment. But it is often more nuanced than that. A puzzling factor of the state’s ailing economy, for example, are our rolling mountains, famous for changing hues with every season and which isolate towns from sorely needed industry and internet access, especially in the southern part of the state, “coal country.”

Coal mine closures began to upend the West Virginian economy in the 1960s, leaving the state with a declining population and workforce for generations to come, tanking county budgets through 2019. Lawmakers promised coal’s comeback or other well-paying jobs, but those pipe dreams never panned out. A dwindling student population led to school consolidations, while the state is simultaneously experiencing a troubling teacher shortage. West Virginia has 10,000 homeless students, as defined by the federal education department, yet lawmakers have largely ignored the issue. Economic distress and an influx of pills led to an opioid crisis (Gazette-Mail reporter Eric Eyre’s exposed how drug firms poured extreme amounts of pills into poor and rural counties, winning a Pulitzer), which in turn fueled a foster care crisis. The majority of the 7,000 kids in state custody are there due to parental drug use and negligence.

And since I returned home, a county abruptly lost its only grocery store; county commissioners, in the wake of a multi-million-dollar budget shortfall due to coal’s decline, were tasked with laying off family and friends in an area with few jobs; an isolated food pantry struggled to feed more than half of the residents living in a former coal town, and the state’s over-burdened child protective service workers, in the midst of the foster care crisis, failed to promptly investigate child abuse reports, endangering kids in abusive homes at risk of being forgotten entirely.

When you spend so much time writing about people experiencing this kind of poverty, it is hard to stay positive, to maintain momentum, but there are hopeful stories in these hollers, too. I’ve gotten to showcase some of them, like former coal towns cleaning out their rivers and opening water tourism businesses; a rural hospital bucking a national trend by expanding rather than closing. I was honored to tell the story of an Afghan refugee, Najib Ahmad Bakhtari, who found a peaceful home in our hills. Signs of life.

Inside my newsroom too, though, I struggle to overcome hopelessness. The once bustling newsroom saw the merger of the city’s two papers, then a 2018 bankruptcy. There are more cubicles than people, and we’ve had a string of unfilled positions due to budget constraints. In the few months I’ve been here, we’ve experienced multiple layoffs, including an award-winning photographer and a veteran entertainment reporter, both gut-wrenching exercises in resilience. We’re now a small but mighty team of nine reporters.

It’s disheartening to know that layoffs of talented colleagues mean unfilled positions and fewer eyes on lawmakers and communities, especially rural communities that rely on our paper for news and accountability. It’s hard to know that when a reader comes forward with a good story idea, the manpower nor newsroom resources exist to write it.

What continues to drive me, though, is the desire to create a better life for the children who live here, the ones born into poverty and disenfranchisement, who may be the first in their family to go to college, who may propel the state into a more sustainable future. They deserve quality education, access to health care, employment opportunities and clean water. My other source of hope are my daughters, now West Virginia girls, like me.

So we will keep picking up the phone, driving to tiny, forgotten towns; we will write, for this generation and the next. Every day is a chance to hear someone in an often-forgotten place. And to project the voices coming from it.

I’m honored to do that.

Amelia Ferrell-Knisely covers poverty for the Charleston Gazette-Mail. This dispatch is part of a series called “On the Ground” with Report for America, an initiative of The GroundTruth Project. Follow her on Twitter: @ameliaknisely.

A version of this story appeared on USA TODAY on February 27, 2020