ON THE GROUND IN JACKSON, MISS

A portrait of struggle and violence in Mississippi 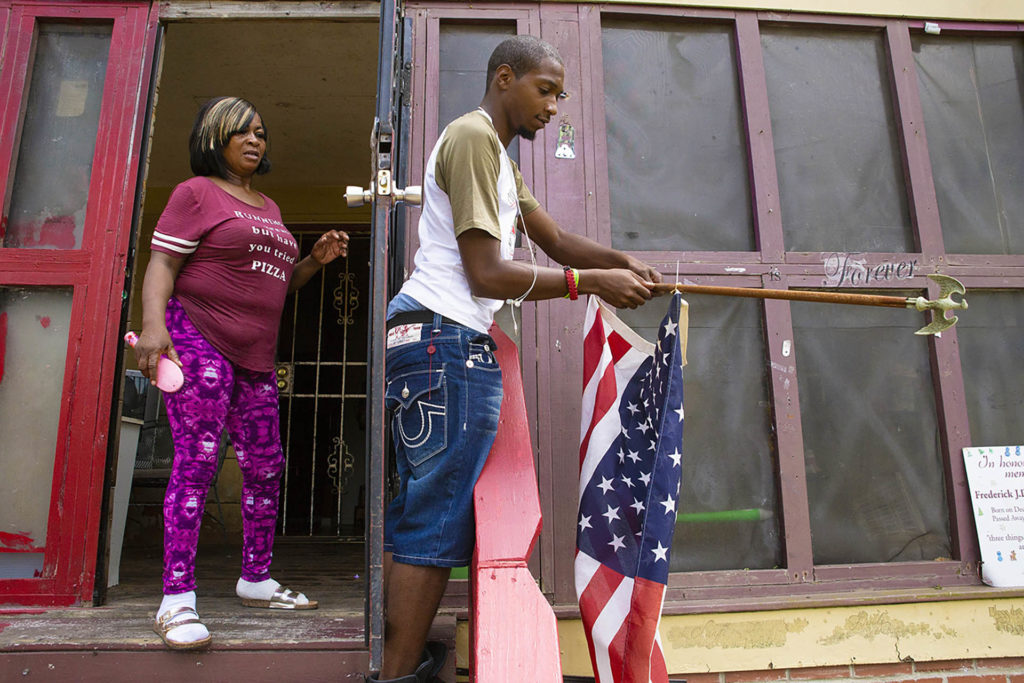 Marilyn Martin, left, assists her nephew, Lee Eric Evans, as he hangs a U.S. flag outside of Martin's home on Davis Street in Jackson, Miss. on Tuesday, July 3, 2018. (Photo by Eric J. Shelton/GroundTruth)

This dispatch is the focus of a GroundTruth Podcast episode, “Almost Independence Day.”

After the first few frames, I put the camera down. We had a conversation about everything from the closeness of the community, to the poetry of daily life which he and other residents said was too often interrupted by crime in the historic district. We even joked about how we both shared the name Eric. For him it was a middle name, and I told him that the origin of the name Eric traces back to early explorers and kings. He liked that.

At one point, the conversation moved to gun violence, and Lee shared with me that he himself had been shot three different times. He’d been caught up in crime in California before he fled the violence there to live with his aunt, Marilyn Martin, in Jackson where he said he was focusing on turning his life around.

He lifted his shirt and showed a canvas of scars stretched across his body from bullet wounds and what appeared to be a stabbing. While he was giving me context for each gun battle, he explained how one of the bullet wounds was nearly fatal. After the conversation ended, I shook his hand and he told me to watch my back in Jackson, that there was more violence than most people realized.

On July 7, just a few days after we met, there were news reports out of Jackson about an eruption of gun violence. Lee was found dead in an alley at the corner of Central Street near Buena Vista, just off the  Farish Street District.

Local television news led with garish crime scene video. Standing in front of police tape and blue lights flashing, the reporters did their live hits about another shooting in the district. When you’ve gotten to know the person behind the shrill television recounting of a “victim shot multiple times,”  even just a little bit, it hits you hard. It makes you think about the tone we as journalists bring to covering a murder. I wondered how his aunt felt, and I tried to conceptualize how the killing took place, how the violence Lee sought to avoid had finally caught up with him. I printed up one of my portraits of Lee, bought a frame and went to the family home to give to his aunt. She stood on the front porch, dropped her head in sorrow and said, “Thank you. It’s really nice of you to do this.”

I didn’t know how or why the universe connected the two of us just days before Lee’s death. Why did I happen to be there and photograph his bullet wounds? Why did I choose to pursue this story? Why was I drawn to talk to him? These questions kept me up for several nights.

If I hadn’t been there, our readers would not have had the chance to hear Lee’s voice, to see a glimpse of his life in one corner of the District. The photographs I took of him were most likely the last recorded images made of a young man who seemed, to me at least, to be in the process of heading in the right direction. I hope the images might sustain as a glimpse of his life, a record for history.

And I hope they might remind those of us who report on local communities why it is important to hear and amplify voices of people who are in need. To have points of view that need to be heard on the issues that matter to their community.

The motive for the murder is still being investigated.

As I looked through my photos of Lee with the American flag framed in the background, I thought about the significance of meeting him the day before Independence Day.  I thought about Lee’s struggle to find his own freedom, and how sad it was that he couldn’t escape gun violence.

Eric J. Shelton is a Report for America graduate who now works with Mississippi Today, serving as the organization’s first photojournalist.