Pope Francis and the revolution in Vatican foreign policy 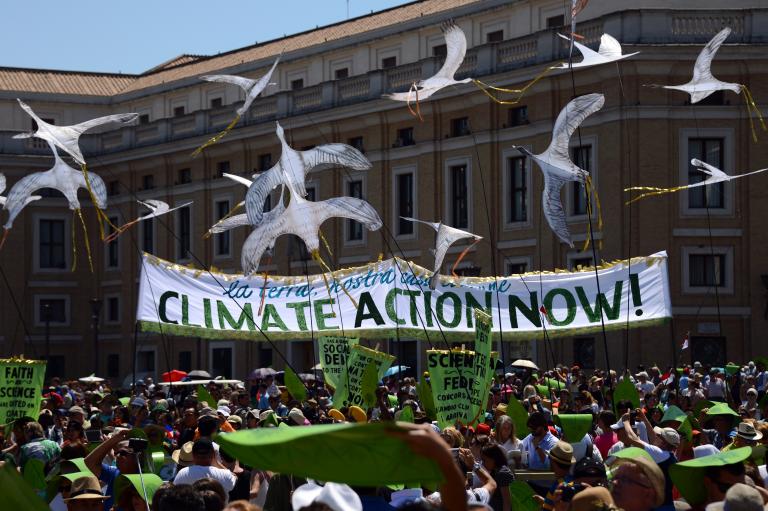 A Vatican conference this week drew mayors from cities across the globe to discuss climate change and modern slavery. The event marked a new turn in Pope Francis’s evolution as a global leader — and as the rare pope with an activist foreign policy.

Speaking in Spanish and without notes, Francis closed the conference Wednesday by giving praise to the politicians and asking their help in the face of “growing bands of poverty” around urban areas, which he called “a worldwide phenomenon,” according to a Vatican transcript.

New Orleans Mayor Mitch Landrieu, who attended the conference, affirmed Francis’s message in an email to GroundTruth: “With more and more people moving to cities, mayors are uniquely positioned to innovate solutions to local and global challenges,” he wrote. “The pope renewed a sense of hope and possibility for mayors to create equitable solutions.”

Francis also called the Congo and Amazon rainforests “the world’s great lungs.” He coupled deforestation with “unemployment and human trafficking,” drew a thread on “slavery in mining” and “the use of certain elements in the purifying of minerals, such as arsenic and cyanide, causing diseases in the population.”

Environmental groups have long decried the ravaging of green belts in the global South, among other forms of environmental destruction. Not since Al Gore raised concern in 2006 with the film “An Inconvenient Truth” has an international figure worked so publicly to fire the jets of public opinion — much less elected officials — on the health of the planet.

Francis has gone farther, making a human rights linkage between ecological destruction, and forced labor and prostitution as people from rural depths flee to cities or mining camps for survival.

The Pontifical Academy of Sciences organized the conference to build support for Francis’s agenda — the eradication of modern slavery as a goal of sustainable development — when he speaks to the UN General Assembly in September.

The idea of a pope inviting some 60 elected officials to Rome for speeches, dinners and backchannel talk is a twist on the tradition of Vatican aides deciding who among governors, mayors and parliamentarians visiting Rome will have audiences or a private Mass with the pope. A photograph with His Holiness stays on your wall forever.

“This intervention by the pope  is appropriate and absolutely essential to wake people up to the dangers of climate change and to the value of seeing human beings as part of nature and dependent on nature,” California Governor Jerry Brown, who also attended the gathering, told Catholic News Service.

Francis is rebuilding a tradition of the pope as moral statesman on the global stage which became moribund under his predecessor Benedict XVI, whose namesake Benedict XV entreated the countries fighting World War I to lay down arms.  He also channeled funds to relief efforts and drafted peace points that President Woodrow Wilson borrowed for the US proposal at the 1918 Treaty of Versailles discussions.

Later popes advanced the cause of peace in different ways. John XXIII, the reformer who called the Second Vatican Council (1962-65), was a former papal diplomat determined to lay Catholic anti-Semitism to rest. He abolished the phrase “treacherous Jews” from the Good Friday liturgy and met one Jewish group, calling himself “your brother.”

His successor Paul VI said often, “If you want peace, work for justice” and in a 1965 speech to the UN shouted, “No more war!”

John Paul II was a catalyst in the fall of the Soviet Empire, channeling funds to the Solidarity union movement in Poland with American help.

He made human rights an issue in other countries under the boot heel, such as in Chile during the Pinochet dictatorship.

But as John Paul struggled with Parkinson’s disease in the last decade of his papacy, he failed to confront the clergy sex abuse crisis, which left a deep stain on the Vatican.

Benedict XVI’s great concern was revitalizing a European church in which Mass attendance had plummeted. But an ill-timed remark about Islam in his 2006 speech at Regensburg, Germany triggered angry protests in Muslim countries from which he never recovered diplomatically.

A month after becoming pope in 2013, Francis dramatized his agenda of “radical mercy” on Holy Thursday by washing the feet of a teenage Muslim girl imprisoned in Rome. The image went viral, giving the pope a huge boost in public opinion, particularly with Muslim youth.

Similar gestures including his visit to the island of Lampedusa after migrants drowned in the Mediterranean, along with his famous question, “Who am I to judge?” about a gay priest, secured his image as a pope with heart for people neglected or ill-judged by society.

Meanwhile, his agenda turned to human rights and diplomacy. President Obama and Cuban President Raul Castro credited Francis as the catalyst in their breakthrough, restoring ties between the countries.

With last month’s release of the encyclical “Laudato Si’ — on Care for Our Common Home,” which traces a nexus between ecological destruction and poverty — Francis cast himself as a planetary activist.

Officials at the Pontifical Academy of Justice and Peace drafted the book-length encyclical using a brain trust approach, culling insights from scientists, theologians and economists like Columbia University’s Jeffrey Sachs.

“Pope [Jorge Mario] Bergoglio created his own power, like an architect who designed and executed a building,” said Andrés Beltramo Álvarez, the author of a new biography on Francis, “¡Quiero Lío!” (loosely translated as “I want to shake things up!”) over lunch in Rome last month.

“He knew the media was an avenue to power,” said Beltramo, a Vatican correspondent for the Mexican news agency, Notimex. “Yet he’s more conservative than we can imagine.”

Beltramo continued, “The impact of ‘Who am I to judge?’ was cultural. He’s not interested in changing doctrine. He’s interested in ideas, changing hearts and minds.”

In pushing his expansive idea of the church, Francis made a major internal shift: marginalizing the extremely conservative Congregation for the Doctrine of the Faith (CDF), which had consequences far beyond the 108 acres of Vatican City.

In John Paul’s papacy, the CDF under Cardinal Joseph Ratzinger was the most powerful Vatican office. Housed in the rust-colored palazzo where Galileo the astronomer was deemed guilty of heresy in 1633, the CDF undercut the reform thrust of Vatican II by trying progressive theologians for allegations of betraying doctrine.

Ratzinger’s 1985 “order of silence” on Father Leonardo Boff, a Brazilian scholar on Liberation Theology, sent shock waves in the Latin American church in a time when dictatorships in Chile and El Salvador were killing priests and nuns.

John Paul and Ratzinger saw Liberation Theology in a Cold War lens, as an offshoot of Marxism, a view shaped by Polish and German experiences of the Soviet Union. Latin theologians saw the Jesus of scripture allied with the poor, asserting human dignity in countries run like plantations.

After Ratzinger became Benedict, the CDF’s punitive mentality went off the tracks. American cardinals Bernard Law and William Levada, both slammed in media coverage for recycling pedophiles, provoked investigations of American nuns for being heretical feminists.

The spurious charges, as reflected in Levada’s distorted readings of the sisters’ documents, ignited a blowback from America, particularly from Catholic women philanthropists who lobbied officials at the Vatican, in an effort that would give Francis a freer hand in revoking the case and publicly praising the nuns.

Benedict’s more important legacy was creating a CDF tribunal to remove clergy pedophiles. Francis has broadened its scope to try bishops for complicity or negligence in harboring child molesters. The jury is still out on whether a Vatican agency can administer justice to bishops accustomed to de facto immunity, but a CDF shift from theologians to bad bishops is an irony Galileo would savor.

Francis sent another signal by welcoming Father Gustavo Gutierrez of Peru, the author of “A Theology of Liberation” to a warm Vatican reception.

Cardinal Peter Turkson of Ghana runs Peace and Justice, and guided the drafting of the ecology encyclical.

“This is one of the centers of progressive thought in the world right now,” New York City Mayor Bill DeBlasio told the New York Times. “In my lifetime I never thought I’d say that sentence.”

To secular liberals like DeBlasio — and a celebrity-stuffed American news media that see religion as trite — Francis’s role on the geopolitical stage is confounding.

But a pope is expected to honor past popes on dogmatic points. Francis is not a radical in that sense. His concern for people on the edges, shaped by his ministry in the slum barrios of Buenos Aires, is counter-cultural to an American ethos of consumerist prosperity and to free-market politicians who make poor people into enemies of the state.

An estimated 35.8 million people, including children, are enslaved for labor or sexual exploitation, according to a 2014 Global Slavery Index compiled by Gallup and the Walk Free Foundation.

Meeting with anti-trafficking activists this week, Francis framed prostitution as slavery in many speeches. That sparked more media attention in Europe as women from Africa and the Balkans, who escaped sexual trafficking rings, began speaking with reporters.

Meanwhile the geopolitics of migration register in news coverage as a byproduct of war and displacement from Syria, Iraq, Afghanistan, Democratic Republic of Congo and South Sudan among other states in conflict.

But the pope’s specter of displaced masses bunched around urban cores stems from the worldview of the Jesuit who saw jolting changes in Buenos Aires for most of his life.

Argentina’s Dirty War (1976-83) institutionalized torture and disappeared 30,000 people. Father Bergoglio as a young Jesuit provincial, or national superior, helped smuggle out of the country people the junta had targeted.

“It was a maze of twisted mirrors in which everyone was suspicious of everyone else and there seemed to be no way out,” writes the Italian journalist Nello Scavo in Bergoglio’s List, which features numbing profiles of people the Jesuit helped escape, and others murdered in the terror.

After Bergoglio became a bishop in 1992, the rings of slum-dwellers around the capital steadily grew as Argentina underwent “structural adjustments” as a precondition of International Monetary Fund loans.

Francis’s activism also relies on an international safety net in church organizations like Caritas, Catholic Relief Services, Jesuit Relief Services and other groups, once viewed simply as missionaries. In a world where democracy has no unified plan to end slavery, the religious workers and NGO members on the front lines are working in broken places of the world to which the pope is drawing attention.

“The Holy See may make a good speech before the United Nations,” Francis told the conference this week. “But if the work does not come from the periphery to the center, it will have no effect; hence the responsibility of mayors and city governors.”

“I thank you and ask the Lord to grant us the grace of being aware of the problem of the destruction that we ourselves have wrought by failing to care for human ecology … so we might transform ignorance into culture, and not the contrary.”

Jason Berry, a religion writer for The GroundTruth Project, is the author of Render unto Rome: The Secret Life of Money in the Catholic Church.