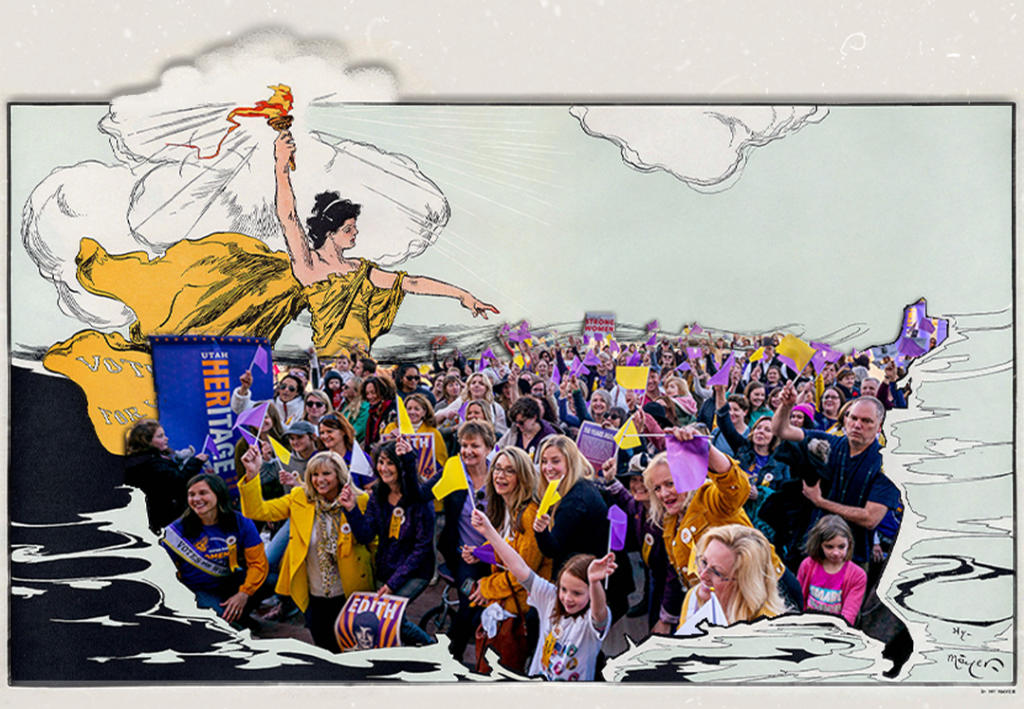 This dispatch is part of a series in collaboration with PBS American Experience that explores the expansion of voting rights in communities across the U.S., part of a larger series called “On the Ground” with Report for America, an initiative of The GroundTruth Project.

SALT LAKE CITY – Hope Zitting-Goeckeritz waited for this day. It was Valentine’s Day and she joined the purple, white and yellow flag-carrying crowd marching up the hill toward Utah’s Capitol. They cheered and took pictures as they reached the spot they were heading for: the building in which a Utah woman, Seraph Young, voted for the first time.

On the 150th anniversary of that historic vote, Zitting-Goeckeritz, 22, stood on the granite Capitol steps and spoke to those in the celebratory crowd before her, challenging them to take up a role in getting more Utah women registered to vote and to increase female representation across the state. People dressed in flowery hats held neon signs, waved banners and cheered beside a dog named Truman, who along with other onlookers wore a red, white and blue sash. It read “League of Women Voters.”

Last spring, the state legislature officially designated February 14 as Women’s Voter Registration Day, a century and a half after the nation’s first female vote. And although there’s a National Voter Registration Day held each year in September, this is the first such day specifically focused on female enfranchisement in the country, according to Zitting-Goeckeritz.

In 2018, 316,000 of Utah’s more than 1 million female citizens were eligible but unregistered to vote, up from 288,000 in 2016, the reasons for which are varied. It’s just one part of Utah’s complicated history of female political participation that reaches back to the Grant administration.

But, with efforts such as this rally, 2020 signals a potential change.

In August, the U.S. celebrates the centennial of the 19th Amendment, which afforded women the right to vote in one of the greatest enfranchisement efforts this country has ever seen. It has been 55 years since the Voting Rights Act was signed into law. And in addition to the presidential race in November, Utah has an upcoming gubernatorial election, a race no Utah woman has ever represented a major party in. The two female candidates who ran in the current race didn’t make it past the signature gathering and convention phases. Still, with such important elections at stake, these anniversaries could provide motivation to increase female representation in Utah.

“Our job is to go out and find all those women and make them vote and change the world,” Karen Shepherd, a former Utah congresswoman, said to the jubilant crowd on the steps of the Capitol. “We have a job, and we’ll do it.”

Yet the tension between the current state of women in Utah and the rosey celebrations can’t be ignored. Propping up Utah’s first female voter, Young, as a symbol of the Beehive State’s constant championing and support of women belies a much more complex story in Utah, nationally ranked one of the worst states for women. These anniversaries are not merely commemorative, but are opportunities to trace the state’s trajectory from the mantle upon which the first woman in the country voted under an equal suffrage law to a reputation of apathy.

An uphill march on a faded legacy

National rankings often place Utah as one of the worst, if not the worst, states for women’s equality. Year after year, the state consistently records one of the largest gender wage gaps in the country, at 10 cents less on the dollar than women nationally, at 70 cents per dollar earned by men, according to the Institute for Women’s Policy Research. There has never been a Utah woman elected to the U.S. Senate, and only two women have served in the five statewide executive offices.

Growing up in Salt Lake City, she’d heard little about Seraph Young, a schoolteacher and grandniece of Utah’s first territorial governor, Brigham Young, the second president of The Church of Jesus Christ of Latter-day Saints, often called the Mormon church. But now, as Zitting-Goeckeritz approaches 23, the same age as Young when she became not only the first woman to vote in Utah but the first woman to vote under an equal suffrage law in the U.S., Zitting-Goeckeritz is one of a handful of people deliberately calling on her legacy.

Zitting-Goeckeritz is director of operations for Voterise, a Salt Lake City nonprofit, and has made it her mission to increase voter and civic engagement among 18-to-29-year-olds and underrepresented groups to further the state’s voting legacy, especially among women.

The road to women gaining the right to vote here – twice before the passage of the 19th Amendment – is delicately intertwined with Utah’s binding ties to the Mormon church, and polygamy.

During the Reconstruction era, Congress wanted to eradicate polygamy, considered by the Republican Party in 1856 to be one of the “twin relics of barbarism,” along with slavery. Some U.S. congressmen and suffragists on the east coast, including Susan B. Anthony’s National Woman Suffrage Association, assumed that if Utah women were enfranchised, they would vote against leaders of The Church of Jesus Christ of Latter-day Saints and end its practice of plural marriage.

Editorials at the time in the still-active Deseret News, a newspaper owned by the church, welcomed the idea as a counter to portrayals of Latter-day Saint women as “downtrodden, weak and uneducated” in political cartoons and anti-Mormon literature.

Though women had voted in the country before, it was often in limited, special elections, such as for the school board, or else they were required to prove some type of property ownership, largely excluding married women and people of color. Wyoming actually passed an equal suffrage law first, but Utah was the first to hold an election, two days after the territory’s women got the right to vote on Feb. 12, 1870.

The acting governor at the time, S.A. Mann, reluctantly signed women’s enfranchisement into law, noting that he had “very grave and serious doubts of the wisdom and soundness” of doing this, but he deferred to the judgment of the legislators – men – “whose opinion I very much respect.”

But Utah women did not ultimately vote for candidates opposed to polygamy, so Congress resumed its anti-polygamy efforts and passed the Edmunds-Tucker Act, an 1887 law that, among other items, stripped all Utah women of their right to vote 17 years after it was first granted. Polygamy would also stymy Utah’s multiple attempts to become a state, and it wasn’t until after the church president issued a manifesto in 1890 marking the beginning of the end of Latter-day Saint polygamy, that Congress invited Utah to try for statehood again.

Women’s suffrage became the most “hotly debated issue” at Utah’s constitutional convention in 1895, according to local historians, as delegates argued over whether enfranchising women could jeopardize chances of statehood. Women’s suffrage was ultimately included, and when Utah became the 45th state in 1896 female enfranchisement became law once again and women could now also hold office. Significantly, this mainly applied to white women, since many women of color weren’t considered citizens at the time.

Less than a century later, in 1992, Utah had the highest female voter turnout in the country, a number that plunged to the nation’s lowest in just 14 years. Experts contend that there are a variety of reasons for the precipitous drop, such as less competitive elections drawing fewer voters. In the last five presidential elections, for example, Utah has voted Republican, and the state has had Republican governors since 1985.

Although there were 28,000 fewer women registered to vote in 2018 than 2016, female voter turnout in Utah in the last two election cycles appears to be trending upward again. Zitting-Goeckeritz and the founders of Voterise seek to maintain that incremental momentum with the organization’s 2020 Challenge, which aims to register 20,000 new female voters. In February, Voterise held a week of registration events at 15 high schools and colleges across the state and signed up more than 670 people to vote, about half of whom were women. By early May, Voterise had registered more than 6,800 people. Zitting-Goeckeritz estimates that number would be higher if not for the difficulties of registering people in person during the coronavirus pandemic.

“Democracy is not a spectator sport, and we need each and every eligible citizen to participate in our democracy. Otherwise, we can’t call it that,” Zitting-Goeckeritz said at a February press conference at the Capitol kicking off Utah’s first Women’s Voter Registration Day.

“Women need to get up from the sidelines and start playing the game,” she said.