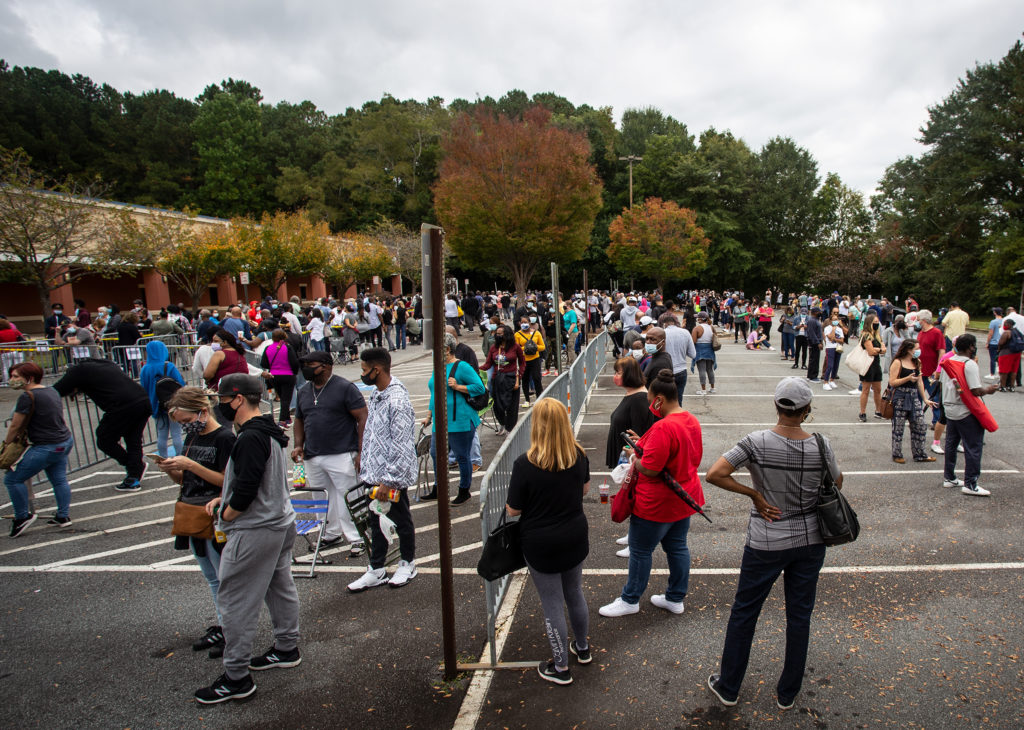 Hundreds of people wait in line for early voting on Monday, Oct. 12, 2020, in Marietta, Georgia. (Photo by Ron Harris/AP)

At 6:45 a.m. Hannah Siegel was the second person in line at her polling location in Fulton County on the first day of Georgia’s early voting. Anticipating the possibility of a long wait time in the state’s most populous county, Siegel and her husband knew to start early.

“I have gotten so many texts and calls from phone banking. We know that it is so important to vote,” says Siegel. “I expected it to take long, but no matter how long I was going to vote.”

When polls opened at 7 a.m., there were more than 50 people already in line. As Siegel stepped up to begin the check-in process, poll workers informed her that Georgia’s new election systems had somehow marked her as having already voted. This was clearly a mistake as it was the first day of early voting. This computer error forced her to wait an additional 45 minutes before she could cast her vote.

“There were only two poll workers and two voting machines. So in the 45 minutes it took to fix my issue, only five people were able to cast their vote,” Siegel explains. After Siegel cast her vote, her precinct reported wait times averaged two to three hours throughout most of the first and second day of early voting.

With the largest early voter turnout in Georgia’s history, some voters experienced wait times of 11 hours. Many reports of voting machine breakdowns and other technical issues plagued polling locations across the state.

However, Siegel says her mind was at ease because of the very attentive poll watcher taking detailed notes of the whole event. “He was there, taking notes and making sure that things were happening the way they should be,” she says.

Poll watchers in Georgia are volunteers recruited and selected by the state’s political parties. On election days, poll watchers are sent around the state to monitor election processes. They are most often sent to precincts that have previously had difficulties in the past. For Siegel’s Fulton County polling location, the past problems stemmed from Georgia’s June 9 primary, where technical difficulties once again created wait times of three hours.

Poll watchers are not the only defense for voters like Siegel. Organizations across Georgia are tracking these problems in broader ways. The New Georgia Project encourages voters to use their mobile app to report any issues they may have. They have taken to social media to ensure voters can quickly report these issues to the organization’s engineers and legal team. They have also launched their NGP Election Protection plan, which seeks to address voter concerns in real-time through resources like food for those waiting in long lines and live to report instances of voter suppression.

Groups across Georgia have developed a rapid response framework in their daily fight to address voter suppression. From nearly 1.5 million eligible Georgia voters purged from voter rolls to technical breakdowns in voting machines and equipment, the state’s continued election failures over the past few years have set the stage for a fight against voter suppression in the 2020 general election. It’s a battleground that has increasingly become more partisan, more polarized and more indicative of America’s fight for democracy.

Christopher Bruce, Political Director of ACLU of Georgia, is at the forefront of several of these battles. “For our democracy to work, we have to work,” says Bruce of the daily battles organizations like ACLU of Georgia face in their fight for free and fair elections. “Voter suppression in Georgia evolves. It’s not something that is stagnant.”

Bruce believes in addressing this, Georgia must develop vital programs that aim to “educate, equip and empower” voters.

The ACLU of Georgia has recently launched a robust poll worker recruitment program following the breakdown in June midterm elections. It seeks to address the decreasing number of poll workers staffing polling locations this election cycle. The average age of the state’s poll workers is 72. This means recruiting poll workers who are not as susceptible to COVID-19 is paramount.

In the case of the Poll Worker Recruitment Program, the election breakdown occurred on June 9 during Georgia’s primary elections when voters experienced long lines and technical difficulties, among other issues, as a result of understaffed polling locations.

Related: How young poll workers may save Americans from Election Day chaos

Phase two of the program goes further to focus specifically on Nov. 3. It aims to recruit 2,000 poll workers statewide, with 700 lawyers working at the four largest county polling stations in the state.

ACLU of Georgia is not alone in this rapid response work. Organizations like Fair Fight, The New Georgia Project and even loosely organized groups of concerned citizens have taken up the cause allowing more Georgian’s to cast their votes than ever.

On Friday, Sept. 25, Coalition for Good Governance, a local nonpartisan nonprofit focused on “election transparency and verifiability,” made a new court filing in direct response to an email from Georgia’s Secretary of State’s office sent the same day flagging an election database issue in Georgia’s $100 million voting system. This rapid response resulted in a ruling that now requires backup paper ballots for every Georgia polling location. While this filing is a part of a larger ongoing lawsuit, the continued focus and rapid response allowed for the hard-fought ruling.

Bruce says these victories come from “making sure you’re in communication with other groups [working within voter advocacy].” While they may not agree on every policy, law, or aspect of voter advocacy, he says it’s imperative to work with other organizations to maintain deeper engagement and readiness levels.

In September, the ACLU of Georgia displayed its collaborative efforts with the release of the report titled Georgia Voter Roll Purge Errors. Produced by Greg Palast and the Palast Investigative Fund, the report revealed almost 200,000 voters were wrongfully purged from voter rolls in 2019. The report also revealed the process used to verify voter rolls is susceptible to age, racial and socio-economic bias.

As a response, the Palast Investigative Fund created the website SaveMyVote2020.org where Georgians can see if they are on the purge list. Additionally, ACLU of Georgia is dedicating itself to seeking alternative methods for maintaining voter rolls that will not readily disenfranchise voters.

While the Georgia Voter Roll Purge Errors report results from several years’ worth of investigation, it still represents the unyielding levels of engagement and collaboration we see within Georgia’s community of voter advocates.

Although this type of work demonstrates a solution, it does not indicate an end to the problem. Instead, it reflects the fragility of America’s democracy.

Instances of voter suppression in Georgia are plentiful. According to The New York Times, the most common forms of voter suppression are voter I.D. laws, polling place closures, proof of citizenship requirements, voter roll purges, and cuts in early voting access. Georgia is the only state to have all five forms in practice and on record.

Its position in the deep south holds an extensive history of voter disenfranchisement. When this history combines with its growing racial and political diversity and its position as a state impacted by the Shelby County v. Holder Supreme Court case, we can begin to understand the way this moment of heightened tension has come about.

Shelby County v. Holder overturned a provision of the Voting Rights Act of 1965 that mandated states determined to have a history of discriminatory voting practices need federal preclearance to make changes to their state’s voting laws. Following this Supreme Court ruling in 2013, states like Georgia, who once fell under this category, were free to change their voting laws as they saw fit.

While this ruling impacted mostly southern states, Bruce says, “There’s no state that’s doing it perfectly.” He argues that states “need to look deeper into how voting works for people who come from low economic backgrounds and are racial minorities in the nation.”

Ultimately, while Georgia serves as a playbook for voter disenfranchisement, it also demonstrates the realities of what it takes to address voter suppression. “It may not always look the same, but it still has the same type of result,” says Bruce of the varying levels and tactics of voter suppression across the country. “It’s not a local issue; it’s an issue that affects all of us.”

This article is part of a project on voting rights in America led by The GroundTruth Project, with support from the Jesse and Betsy Fink Charitable Fund, the Solutions Journalism Network and the MacArthur Foundation.