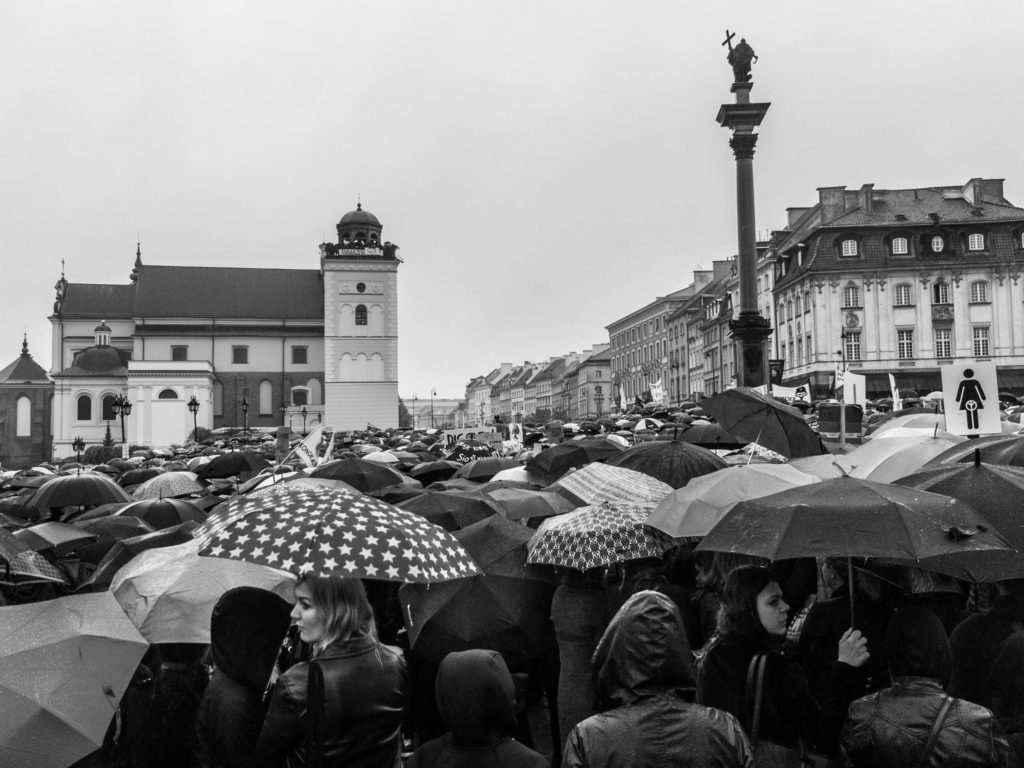 It was pouring rain, but across Poland, women donned in black and holding umbrellas flooded the streets Monday. Tens of thousands cut work to protest a bill calling for a total ban on abortion.

Poland’s current abortion law is already one of the strictest in the EU. Women can only have abortions in cases of rape or incest, a threat to the mother’s life or health, or severe damage to the fetus. Under the bill put forward by the citizens’ group Stop Abortion and supported by the reigning conservative, nationalist Law and Justice party (PiS), all abortions would be criminalized and women could be jailed for miscarriages.

“[This] would mean living in fear,” said Urszula Turkiewicz, 28, an English teacher and translator in Warsaw. “Fear of being sexually active, fear of being assaulted and having to go through pregnancy and childbirth… fear of not being able to get proper medical care if they do get pregnant [by choice].”

Then on Wednesday, a Polish parliamentary committee rejected the bill. Jarosław Gowin, the Polish minister of science and education said that the women’s protest had “caused us to think and taught us humility.”

However the proposed bill harkens back to pre-war Poland when the Catholic Church had greater influence in government and reproductive rights were more severely limited. A survey showed that 74 percent of Poles oppose a ban on abortion.

“Abortion is not something that I support with all my heart but I support choice,” said Karolina W., a 22-year-old financial services provider who grew up in a Catholic home and didn’t want to be fully identified. “I believe that any woman living in Poland in the 21st century deserves to have the right to choose what happens to her body.”

The Church is frequently criticized for its pressure on the country’s politics.

The Law and Justice party (PiS) was formed in 2001 by former prime minister Jarosław Kaczyński and his twin brother Lech. After the death of former president Lech in 2010, Jarosław gained power as the head of the party but he never held political office. During the 2015 elections and the height of the refugee crisis, Jarosław took an anti-immigrant stance and denounced other EU-supporting candidates for supporting foreign values.

PiS later won the majority in parliament and the PiS candidate, Andrzej Duda was elected president. Many other European countries have shifted rightward along a similar trajectory.

After last year’s elections, issues like Poland’s relationship with the EU and press freedom have drawn Polish millennials to the streets. One protest in May attracted the biggest crowd since the collapse of the communist regime in 1989.

Turkiewicz said she sees parallels between the United Kingdom’s Brexit vote in June and Poland’s elections in 2015. A Wall Street Journal analysis of polling data showed that 60 percent of people between the ages of 18 and 24 wanted to remain in the EU. However, according to Sky News data, only 36 percent of that age group cast a ballot.

A similar situation resulted in the outcome of Poland’s 2015 elections. The ruling PiS party received 25.8 percent of the votes from Poles between the ages of 18 and 29. With such low voter turnout in the age group, that was enough to win the majority.

“Young people [in Poland] did not vote because they thought their vote didn’t count,” Turkiewicz explained. “They let older people decide for them, and the older generation chose the more right-wing, conservative party.”

Karolina W. joked that protests in Warsaw have become so popular, they are the “new Sunday brunch.” But she doesn’t think the effort should stop at protests. “Many of my friends didn’t vote and they are complaining about current politics. I am very disappointed about their approach to all this.”

With the proposal of the newest abortion bill, Polish millennials are directly facing the repercussions of not casting their vote. “We are the next generation to have children. We are the ones, who are now making decisions that will impact our entire lives,” said Karolina W.

Since the fall of communism, Poland’s economy grew even while other countries suffered a crisis. One World Bank economist estimated that in two decades the country “offset 500 years of earlier relative economic decline against western Europe.”

Similarly, United States millennials’ concerns such as joblessness and gender inequality has taken center stage in this year’s election. Republican nominee Donald Trump has been repeatedly criticized on not only his treatment of women, but his inconsistent stance on abortion. Trump has taken several positions on the issue and although he eventually recanted his comment, he went as far as to say that women who have abortions should face “some form of punishment.”

Monday’s protest against the Polish government inspired young women around the world, who wore black in solidarity and posted to social media.

Karolina W. said that Poland is a wonderful country that happens to be run by people whom she believes don’t love it or its citizens.

“It’s important to remember that these people will change,” she said optimistically. “But they will change only if we will carry out our civic duties, such as voting and expressing our views.”