Raising a family behind bars in the Philippines 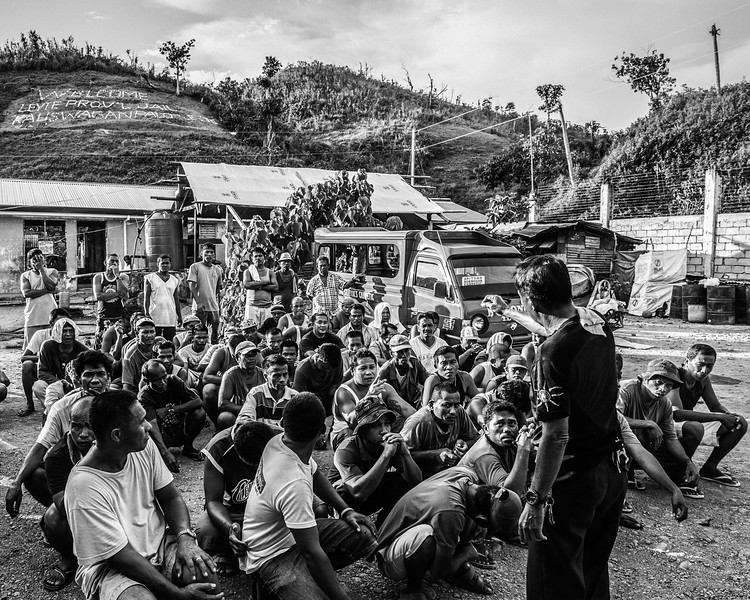 A warden gathers inmates in the courtyard of Leyte Provincial Jail. Following the initial devastation of Typhoon Haiyan, displaced Filipino families were forced to move in with and live alongside their incarcerated relatives for over 6 months. - ()

Lawrence Sumulong’s “Raising a Family Behind Bars” documents the fate of 60 Filipino families who were forced to move into the Leyte Provincial Jail after being left homeless by Typhoon Haiyan in Palo, Leyte.

For over 6 months, families lived alongside their incarcerated relatives, some of whom were accused of homicide and rape. They have since moved out of the prison.

A note from the photographer

When I was 21, I took a week off from school to attend a workshop with David Alan Harvey of Magnum Photos in Brooklyn. At the time, I was a student at Grinnell College in Iowa where I was studying and writing poetry. I had only been taking photos for one year, as another creative outlet.

The workshop began my education in photography. David, who remains a friend and a mentor to this day, helped nurture the spiritual core of my work. On the heels of that experience, I was given the chance to assist Chien-Chi Chang for a week of Magnum Photos workshops at Milk Studios in Chelsea, where I was exposed to a deluge of insightful talks by several Magnum photographers.

Concurrently, my father who lived in New Jersey was diagnosed with an aggressive form of lymphoma. Every night, after finishing my responsibilities at Milk Studios, I would take the bus from Port Authority to the hospital to see my father supine, unconscious, and dying in the ICU. He passed away three days after the workshops ended. When I did slides that week for Paul Fusco’s presentation of his book, Chernobyl Legacy, I teared up quietly behind the projector as I engaged with his images of frailty, illness, and death. In that moment, I began to feel that photography would be inextricably linked to my experience of loss and how I dealt with the cycles of life. Since that moment, I have deliberately chosen to tell stories that I can relate to my own life and connect to with empathy.

“Raising a Family in Prison” accomplishes this directly, as it is a complex account of familial trauma in the Philippines, my country of origin. Aesthetically, it is my most straightforward series, but I feel its imagery moves beyond trafficking in misery towards an examination of the workings of a culture and its people. Ultimately, I am using photography as a means of contributing in my own way to the visual history of the Philippines, which in turn contains the record of my family’s life and my own.

Lawrence Sumulong (b. 1987) is a Filipino American photographer based in New York City and Manila. His documentary work explores themes of alterity within the Asian American experience as well as the Filipino culture and diaspora. Among others, his work has appeared in the Chobi Mela International Photography Festival, Fotoistanbul, the Jorge B. Vargas Museum, Le Monde’s M le magazine du Monde, The New Yorker: Photo Booth, The New York Times, Verve Photo: The New Breed of Documentary Photographers, and the Milk Gallery for their MGU Autumn 2011 exhibition, which showcased pieces by “the industry’s most progressive and innovative emerging photographers.”

His postcard series for the publication Abe’s Penny is in the permanent collection of the Museum of Modern Art Library and the Brooklyn Museum Library. He has worked as a freelance photo assistant for several photographers of Magnum Photos in workshop settings. He has also assisted photographer Giles Clarke of Getty Images Reportage. He is the photo editor at Jazz at Lincoln Center.