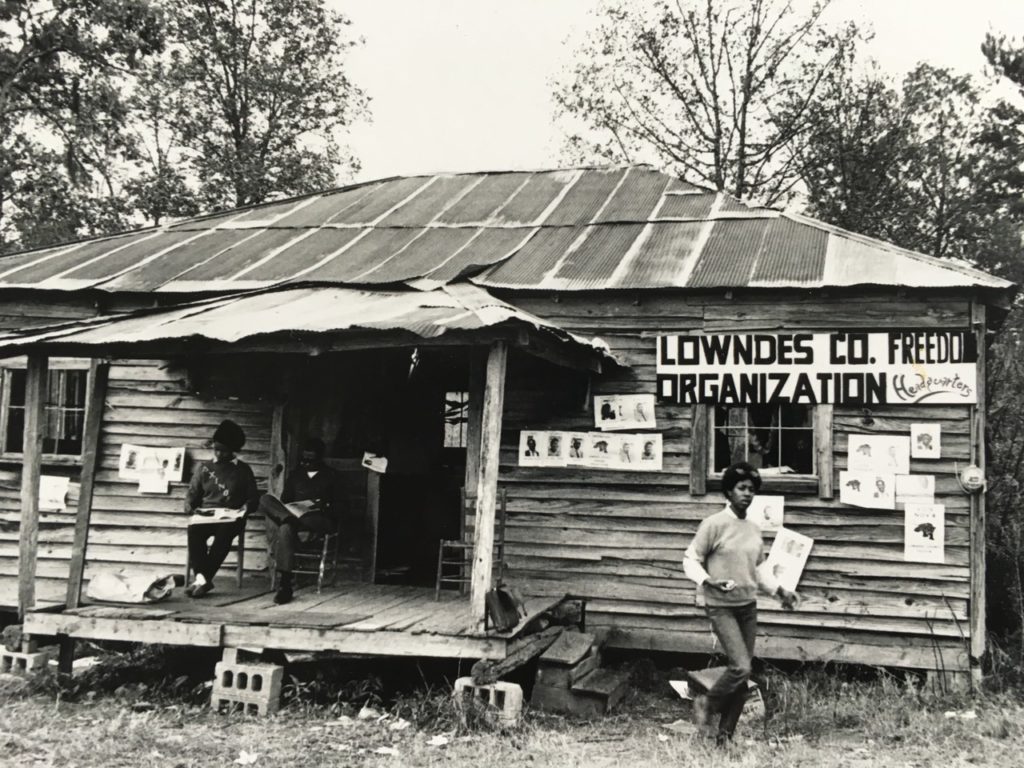 Jennifer Lawson, walking away from the porch in the foreground, seen working as a civil rights activist in Lowndes County, Alabama circa 1966. (Photo courtesy of Jennifer Lawson)

This dispatch is part of a series in collaboration with PBS American Experience that explores the expansion of voting rights in communities across the U.S., in connection with  The Vote, by American Experience, and as part of GroundTruth’s initiative called “On the Ground” with Report for America.

When Jennifer Lawson was 16 years old, she walked out of her high school class to join over 1,000 schoolchildren protesting segregation in the 1963 Children’s March in Birmingham, Alabama. They were met by sheriff’s deputies with fire hoses, batons and police dogs. Lawson was arrested, then released.

The next year, Lawson started college at the historically Black Tuskegee Institute. Outside of class, she began registering people to vote: first in Macon County, Alabama as part of a team of Tuskegee students then with Student Non-violent Coordinating Committee’s (SNCC) organizers in Wilcox County, Georgia and Lowndes County, Alabama.

Lawson’s purpose was affirmed that summer of 1964, when, during what became the famed Mississippi Freedom Summer, the bodies of three of Lawson’s fellow civil rights workers — one Black, two white — were found buried in an earthen dam, murdered by a group of local white men.

“That was my Black lives matter moment,” she said.

When Lawson began visiting Lowndes County, Alabama in 1964 to register Black voters, the task she and her SNCC colleagues faced was immense: The county was roughly 80% Black, but the white minority’s ongoing efforts to keep Black people from voting meant that only four Black residents were registered to vote.

But then, in 1965, U.S. Congress passed the Voting Rights Act, banning literacy tests and other discriminatory practices and requiring federal registrars in counties such as Lowndes. Lawson and SNCC ramped up their voter registration and education efforts and, along with local activists, launched the Lowndes County Freedom Organization, a political party alternative to the openly white supremacist  Alabama Democratic Party.

By 1966 more than 2,800 Black voters were registered in Lowndes. Similar stories played out across the eleven states partially or fully covered by the original VRA. In just two years, from 1965 to 1967, Black voter registration in covered jurisdictions shot from 29.3% to 52.1%.

Lawson became a lifelong civil rights activist. And as sustained protests for racial justice today evoke the mass movements of the 1960s, veteran activists like Lawson are now the movement elders of a reinvigorated fight for civil and voting rights, nearly six decades after that formative spring afternoon in Birmingham.

Yet, 57 years after the VRA changed the face of the American electorate, it was defanged by a 2013 Supreme Court decision which overturned a crucial clause requiring some jurisdictions to have significant voting policy changes pre-cleared by the federal government. Tactics of voter suppression have since increased, threatening access to the ballot box in a disturbingly similar fashion to what Lawson recalls in her youth.

In laws that convicted felons must pay off fines and court fees before they can vote, Lawson sees the poll taxes her parents had to pay to vote in Alabama. In calls from some public figures for an “army” of citizen poll watchers to guard polling places, and in growing activity from armed militias, Lawson sees the sometimes-violent voter intimidation of past decades.

“I fear for our democracy, I really do.” said Lawson. “I’m not sure that people understand what we may lose.”

New voting obstacles have cropped up as the coronavirus pandemic forced officials across the country to overhaul their election systems on short notice in the leadup to a contentious presidential election. It’s led to at least 300 court cases across 44 states.

“What’s happening now is not worse. The atmosphere of the 1960s was one in which black people were constantly physically being beaten, threatened, lynched for trying to vote — white terrorism against black people,” said Alaina Morgan, an African diaspora historian at the University of Southern California. “But what’s happening now operates in a way that allows people to dismiss it.”

Though Lawson has seen progress since she first stepped out into the streets of Birmingham as a teenager, she remains firm in her resolve: There is more work to be done.

In 2011, Lawson and her civil-rights era peers started the SNCC Legacy Project, a collective of SNCC veterans who hope to pass their organizing wisdom on to the rising generation of activists fighting for equality today.

The SNCC Legacy Project scheduled a conference for this summer, before the pandemic put plans on hold. But after George Floyd died under a Minneapolis police officer’s knee in May, an enraged slew of younger activist groups contacted the project to ask if some of the conference’s activities could be moved online.

“I think when we look at some of the civil liberties we now get to experience versus the fight our ancestors once fought: Yes, we’ve made some progress. Some is not good enough,” said DeAnna Reed, a project manager for voter mobilization group Woke Vote who worked with the SNCC Legacy Project on a series of virtual panels dubbed The Continuum earlier this summer.

“It’s almost like the passing of the baton. They’re advising us on how to continue this race,” Reed said.

Over the last several months, through a number of virtual forums and webinars, SNCC Legacy Project members have been partnering with the current leading organizations in voting and civil rights like Woke Vote, Black Youth Project 100, Dream Defenders and the National Association for the Advancement of Colored People. The simple but momentous mission is to pass on activists’ precious knowledge, gained through years of hard-fought organizing. It’s the same sort of help Lawson says she and her peers received from their own elders – people like Ella Baker and groups like the NAACP.

That wealth of wisdom has made veteran activists like Lawson invaluable to the new generation of organizers.

“I would follow Jennifer Lawson, anywhere, anytime, always,” said Ash-Lee Woodard Henderson, the co-executive director of the historic Highlander Research and Education Center and an active participant in the Movement for Black Lives, who first met Lawson as part of the SNCC Legacy Project launch in 2011. “In a time when folks are scared and overwhelmed and devastated and depressed, the reason I have hope and a light at the end of the tunnel is because of folks like Jennifer Lawson and the work that she’s done. With elders and leaders like her, I don’t know how we can’t win.”

Perhaps most critically, part of the knowledge Lawson hopes to pass on is how to transfer the energy and anger of protests into tangible change.

“When we were in the movement back in the 60s, there were young people who would be furious because someone was murdered,” she said, recalling a moment similar to the Black Lives Matter protests of the last decade. “But there’s a limit to protest. At some point trying to create the country you want out in the streets has the risk of thousands of people dying unnecessarily. The right to vote and a free and fair vote becomes a way of gaining power.”

Despite all the barriers, Lawson remains hopeful: There’s a new generation on the move, picking up where she and her civil rights peers left off.

But voting on its own, Lawson urges, isn’t enough without a larger vision:

Megan Botel and Isaiah Murtagh are Poynter-Koch Media and Journalism Fellows with The GroundTruth Project, covering voting rights in America. Follow them on Twitter: @meg_botel and @isaiahmurtaugh