ON THE GROUND IN MANDAREE, ND 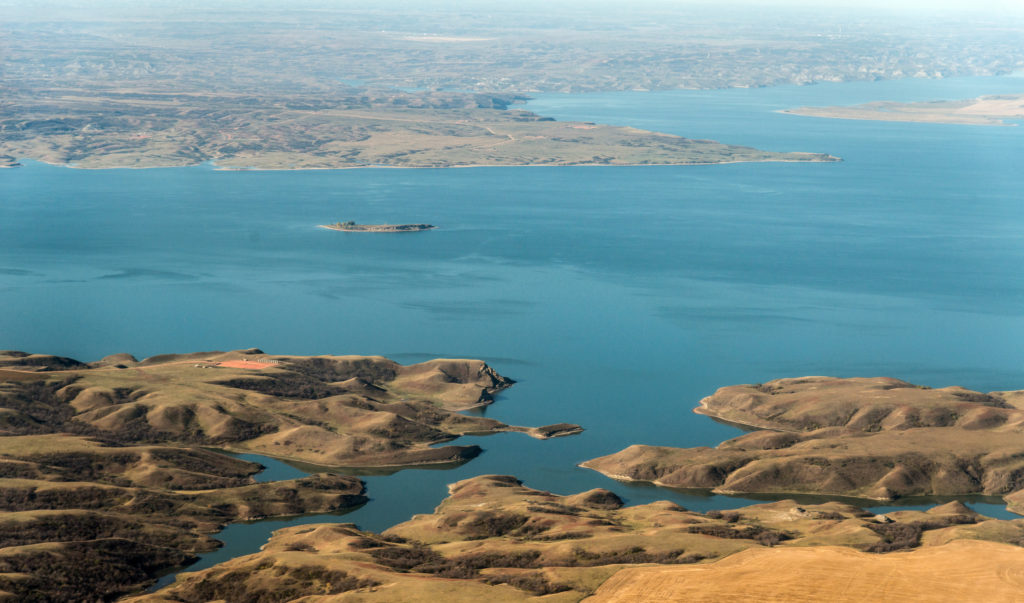 Man-made Lake Sakakawea flooded what was once the treasured homelands of the Mandan Hidatsa Arikara Nation. The reservoir was part of a 20th-century U.S. government flood act to help control the Missouri River. Photo of the reservoir taken on Oct. 9, 2014. (Photo by North Dakota Department of Transportation)

MANDAREE, N.D. — The road was flat and the landscape on either side matched.

Meagan Hall, the summer photography intern, sat in the passenger seat as I, the Indigenous issues reporter at the Forum of Fargo-Moorhead, drove my 2009 silver Hyundai Sante Fe west on I-94.

It was mid-July. Our six-hour drive from Fargo, North Dakota, to the Mandan Hidatsa Arikara Nation, or MHA, led us through the great expanse of the state. The more than 300 miles of land we traversed was once Indian Country, occupied by the Sioux, the Ojibwe, the Mandan, the Hidatsa, the Arikara, and others prior to colonization.

As we approached MHA the land began to change from plains to something more rigid: the outer edges of the Badlands. Our mission was to cover the annual Hidatsa Powwow in the town of Mandaree, North Dakota. The “Grand Entry” began at 7 p.m.

By early afternoon, we reached Four Bears Village, a hub on the reservation. A bridge that leads into town is suspended over Lake Sakakawea, a reservoir that flooded their treasured homelands in the 1940s as part of a government flood act to help control the Missouri River. Tribal members — forced to re-bury their dead, move out of their homes and off their farms — still refer to the event as “the Great Flood.” Now the lake offers water recreation, such as a yacht dinner cruise, a selling point to tourists.

The Great Flood split up the three tribes and their communities, leaving many more isolated on the large Fort Berthold Reservation. But with events like powwows, tribal members come together again.

The powwow grounds were just south of Four Bears Village. The Hidatasa Powwow was a three-day event, starting Friday and ending Sunday. Once Meagan and I arrived, we surveyed the grounds. People had already set up their campers and tents on the outside lawn. On the inside lawn was an arena with about a dozen rows of concrete bleachers where attendees set up their chairs. Surrounding the arena were vendors, selling Indian tacos and fry bread, art, clothing and jewelry.

Just down a gravel road, a rodeo. We ventured there for a little while as we waited for the powwow to start. A woman I met in the bleachers told me, “I’ve always wanted to meet a writer.” As we talked more, she shared with me the effects the oil boom in western North Dakota had on the tribe, especially how it led to an increase in missing and murdered Indigenous women there.

She noted specifically the loss of 32-year-old Olivia Lone Bear, an MHA tribal member who went missing in 2017. Searchers recovered her body months later in a truck at the bottom of Lake Sakakawea. A 2012 report from the United Nations’ Human Rights Council said extraction industries operating on Native peoples’ reservations can have “a detrimental impact on Indigenous women and girls,” resulting in sexual assault, trafficking and exploitation. Plus, Native American women experience violence at rates higher than any other race.

Before the end of the rodeo, Meagan and I went back to the powwow just in time to see the Grand Entry. It began with U.S. veterans marching into the arena holding a Native American flag made of eagle feathers, followed by the flag of the United States of America.

Then one by one, hundreds of Indigenous people, all wearing traditional regalia, danced into the arena.

The beat of the drum was amplified by speakers, and thousands of jingles hanging from dancers’ regalia clinked and clanked.

Indigenous people from all over the country joined the circle — from the Oneida Nation in New York, to the Navajo Nation in Arizona, to the Blackfeet Nation in Montana, to the Standing Rock Sioux, Oglala Lakota and MHA nations in the Dakotas. Only a few onlookers sat outside the arena. The rest had joined in the dance.

At first, I just watched, taking in the scene. It was the most beautiful expression of culture I had ever seen.

Once the Grand Entry ended, I scoped out dancers to talk to. Ruth Swaney, a member of the Salish tribe, spoke with me for 20 minutes, telling me she drove 750 miles from the Flathead Nation in northwest Montana to attend the Hidatsa Powwow for the first time.

Summer time is best known to many Indigenous people as “powwow season,” which often entails a lot of traveling, and a lot of dancing. Swaney said she attends powwows across the country to practice the traditions her ancestors worked hard to keep alive. Swaney told me she even made her own regalia, with sewing and beading, and she explained the different kinds of powwow dances as the announcer cycled through the various categories of competitive dancing.

“We are going to be who we are,” she said. “We don’t have to suppress or hide that anymore.”

Morris Bull Bear, a member of the Oglala Lakota Nation in South Dakota, stood off to the side of the arena, watching passerby. He looked serious and serene in his regalia, wearing a headdress made of eagle feathers and holding a staff. I approached him and asked if I could talk to him about the powwow. He told me, “Don’t be afraid to ask questions.” He was a friendly man, even handing me his traditional staff to hold for a moment.

Natasha Rausch covers Indigenous issues for The Forum of Fargo-Moorhead. This dispatch is part of a series called “On the Ground” with Report for America, an initiative of The GroundTruth Project.