‘Our Collective PTSD’: Flares of violence and calm in Minneapolis 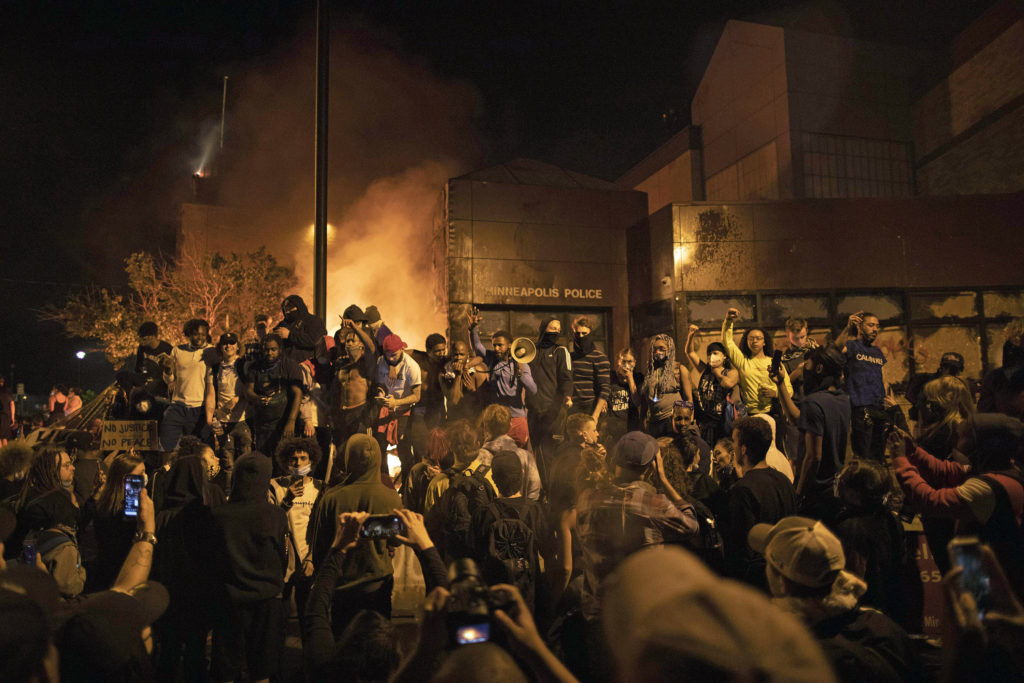 Protesters stand together in front of the 3rd police precinct in Minneapolis, Minnesota on May 28, 2020. (Photo By Chris Juhn/GroundTruth)

When protesters took to the streets of Minneapolis on May 26 to demand justice for George Floyd, I thought I knew what to expect. The aftermath of the police shootings of Jamar Clark, Philando Castile, Justine Damond, Brian Quinones, Thurman Blevins and many more sparked mass protests and occupations when they started, but nothing like this.

I’m from Burnsville, a town 15 miles south of Minneapolis. Working as a freelance photojournalist since 2014, I’ve covered the neighborhoods where rounds of tear gas and rubber bullets now fly, getting to know the community and chronicling their lives.

After a video showed Minneapolis Police officer Derek Chauvin kneeling on the neck of George Floyd for seven minutes and 46 seconds (the actual time that prosecutors say Chauvin kneeled on Floyd’s neck, although the original reported time, eight minutes and 46 seconds has become a rallying cry for protesters), killing him, community members took to the streets in protest.

When you’ve covered protests before, you learn to adjust to the sounds of stun grenades and the mist of pepper spray and tear gas around you. However, I was surprised by the volume of tear gas and other crowd control devices used against the protesters.

Then, on the second night of protests, the fires began.

I was talking with a reporter on the street as we heard the sound of window after window being smashed out of the different businesses around us. We watched as police stood guard in front of a team of firemen trying to extinguish flames engulfing a building, separating them from the crowd. The police watched as people looted the businesses, unwilling and perhaps unable to stop the chaos.

The fire created silhouettes of police and dozens of bystanders there to witness the scene, an entirely different image than I was ever able to capture before. It illustrated calm in chaos while the fire itself became a symbol of the people’s anger. In the distance, a boom. It was hard to distinguish between fireworks, a stun grenade and gunfire, but by the end of the night I was able to tell the difference.

Protests and rioting continued into the night and over the next few days. Story after story of neighborhoods trying to protect their homes and each other emerged as people started arming themselves to defend what they owned. On the morning of May 28, I walked past a few abandoned cars in the middle of the street blocking the road. When I asked neighbors why the vehicles were sitting vacant I was told that police pulled the people out of the vehicles, arrested them and slashed their tires the night before. Another car on the corner had the front dented in with multiple areas dusted with a green powder, indicating where a rubber bullet made impact. Witnesses said someone put a brick on the gas pedal of that vehicle and “ghost drove” toward police.

The following night, after a curfew was enacted and the National Guard was deployed in Minneapolis, I followed a group of protesters up Nicollet Ave after curfew to the front of Pimento Jamaican Kitchen. The restaurant was being used as a staging ground for the community patrol. In front of it I saw a guy getting pushed and his shirt torn by people accusing him of trying to break in. The trust I’ve developed with the community over the years helped me get through the door. Inside, thousands of dollars in donations of food and diapers, gathered to distribute to community members affected by the pandemic, were being protected by armed people.

As I walked to the back, I saw Samantha Lee-Gonzales, a former candidate for City Council in Ward 3 of Minneapolis back in 2017, guarding the back with a shotgun. Although she lost the election, she continues to be a voice and leader to the community. Another source took me to the back of the restaurant to show me where, earlier in the day, they stopped a man with a gun that hopped over a fence that separates the back of the restaurant from an alley. Later that night, after I had left to continue my coverage, Pimentos was attacked again and Lee-Gonzales got into a shootout with someone trying to get in. She told me that she was able to repel the assault and nobody was hurt, but ultimately, they decided to abandon the restaurant to ensure the safety of those inside. When she got home she discovered that the front of her house had bullet holes in it.

After I left Pimentos I met with two other photographers to try to get to the memorial site. Nearly every block had people standing guard, but in most cases they were friendly. Several times we were offered shelter, food and water by complete strangers. While we were documenting a confrontation between protesters and authorities in front of a gas station, a line of police and National Guard swarmed us and started blasting everyone with rubber bullets. At that point, we decided to call it a night, but struggled to make it out of the area. Police began blocking off every road and at one point, an officer aimed a rifle with live ammo at us after we identified ourselves as press. We turned back and found a new way out.

Over the next few days the clashes diminished but many protests gained strength. The memorial site at E 38th Street and Chicago Avenue became a focal point. Not only for protests, but also for healing.

The site was turned into a sort of church during the day, where preachers prayed over people and many of those congregating fell to their knees and broke into tears. Grown men with tattoos on their faces looked up into the sky, crying out for help and salvation as they mourned at the site where Floyd was killed. Baptisms were being conducted on site as crowds gathered around giant tubs, cheering when the newly baptized emerged from the water.

For a few days, the memorial radiated a peacefulness that brought the community together. The gangs, who used to dispute this area as territory, put aside their differences to protect the residents. And veterans, armed with assault rifles and wearing bullet proof vests, also took on the task of protecting the community against the white nationalists who have been showing up at night with guns, trying to intimidate protesters.

Peace, however, was fleeting. There have been episodes of violence at the memorial site, including shootings. On Sunday, a man died and 11 more were injured after a shootout near the memorial. And, although it hasn’t been confirmed, the gangs’ truce might be over.

I was told a while back that if you aren’t scared while doing a project in photography then you aren’t growing as a photographer. That saying has never been more true than now. At the intersection of 38th Street and Chicago Avenue, right in the middle of the memorial, now lies a statue of a raised fist with an inscription that reads: “Our Collective PTSD,”  an accurate description of so much of what I, my colleagues and the community are going through.

How the events unfolded

On May 25, 2020 former Minneapolis Police Officer Derek Chauvin, arrested and handcuffed George Floyd after workers at Cup Foods claimed he gave them a fake $20 bill. While handcuffed on the ground Chauvin put his knee on his neck for 8 minutes and 46 seconds, killing George. Community members near him started to film it on their phones and the videos went viral. Local activists quickly organized an event in honor of George the next day at the site where George was killed by Chauvin.

The next day thousands of people showed up to the site to protest what happened. Shortly after the event began it spread into 2 groups, one stayed at the site and the other marched to the 3rd police precinct where Chauvin worked. Some of the organizers spoke to the crowd while pleading with everyone to stay peaceful. As they continued to speak many disregarded their plea and started to break windows on the precinct and destroy police cruisers in the back. Eventually a large group rushed the main holding area for vehicles pushing down part of the fence and destroying cruisers.

Minutes after they broke into the main lot and started to attempt to destroy the police cruisers officers showed up in riot gear down the alley. They started to launch tear gas and began to clear protesters and rioters.

After protesters were cleared out of the back of the station the police used round after round of tear gas, rubber bullets, and stun grenades. Protesters did not back down and as the night continued the liquor store and other places nearby were vandalized and looted. Protests continued through the night and into the next day until rioting and looting broke out all over the area and businesses were set on fire.

The riots spread throughout the city, then the metro, and eventually other cities followed. They continued for days and as the National Guard was deployed and a curfew was put in place things started to eventually clear up.

At first protesters made the National Guard retreat, crowds erupted in cheers as the guard abandoned the lines they were trying to hold. After some reorganizing, a curfew was put into place around the Twin Cities and the police and National Guard worked together to stop the rioting and looting. In the end hundreds of millions of dollars in damage was inflicted on the city but a push for real justice for George Floyd seemed to be effective when comparing how quickly things changed with protesters demands compared to other similar cases of people killed by police.

After the riots were broken up and the curfew was lifted the protests still continued, but they were peaceful.

The community had kept the memorial site occupied by Cup Foods on E 38th St and Chicago Ave in Minneapolis. This site, which started out as a place where emotions and anger flowed over the killing of George Floyd and the countless other lives lost at the hands of police has become a place of healing, mending wounds, and uniting the community for the cause of justice and change.