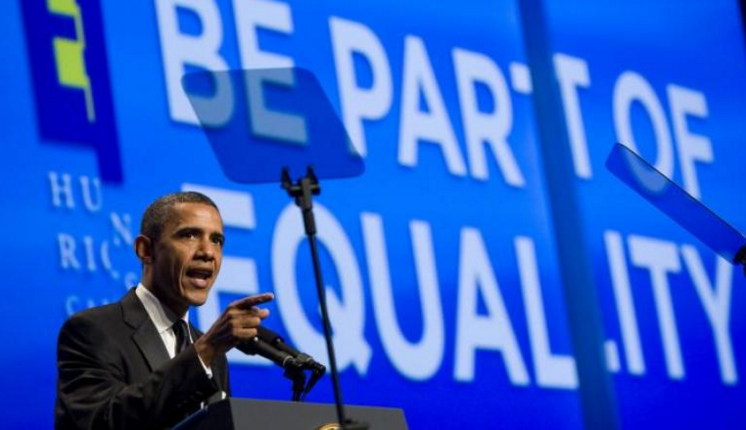 Many Americans like to think of the U.S. as a country to emulate on LGBT rights, from our music trends and gay-themed publications to the quality of gay life in the country’s big cities.

But same-sex marriage remains a piecemeal, state-by-state jumble, and the continuing struggle on many equality issues — particularly for the transgender community — also shows the United States to be somewhat behind.

While the September end of Don’t Ask, Don’t Tell is a tremendous milestone, it came long after allies like Israel, Great Britain and Canada opened up their militaries.

In fact, many of the most transformative changes for the global LGBT community are happening elsewhere in the world.

Take Argentina, a predominantly Catholic country once led by a brutal military dictatorship, which passed a law legalizing same-sex marriage in July 2010. It was one of the world’s most historic gay moments and an event I covered, getting the chance to sit with President Cristina Fernandez de Kirchner after the signing in her private office in the Casa Rosada.

Fernandez spoke of gay Americans moving to Argentina to get married, frustrated at their own country. More importantly though, she felt the biggest impact would be on Latin America. Mexico, Brazil and Colombia are increasingly gay-friendly, both in terms of tourism and legal changes for their citizens. They’re not alone — other countries are changing, too. Spain, for example, legalized same-sex marriage in 2005.

America’s mainstream media coverage of the LGBT community has vastly improved, and certainly same-sex marriage and DADT have made for attention-grabbing news. But how well are we in the media parsing out the deeper issues of these new laws? Do we see the mainstream media — or even the LGBT media — doing enough to cover the stories that lie beyond our borders, telling the stories of the struggles of others and the landmark achievements of their own countries?

Given the global and interconnected nature of the LGBT rights battle, to miss these international stories is to give an incomplete picture. An additional challenge of this reporting is that many places with LGBT news can be violent and dangerous. Consider Iraq, a place I visited in 2007 and 2009 for New York’s Gay City News, where militias once tracked gay men. Or Uganda and other parts of Africa, where homophobic violence has been fomented by certain American groups, covered by Jeff Sharlet, whose work was simultaneously published by The Advocate and Harper’s Magazine.

Consider further the challenge in covering places where gay life is ambiguous. One Lebanese artist I interviewed called sexuality the “mystery,” making every interaction more interesting.

Sometimes ambiguity is protection, and journalists must be aware of this. There is always the bachelor uncle or the spinster aunt living with a close friend. The dots purposely remain unconnected, and assuming gay life means only rainbow flags and parades is to be blind to local culture.

I understood this notion went even further when I went to cover LGBT issues in Afghanistan: I was advised by a reporter with friends in West Hollywood to “throw away any notion you have of what gay means in the first world” before my visit. While many men engaged in same sex relationships, the “gay culture” that would be familiar to most Westerners was scarcely evident. Connecting to these communities, though difficult, is important.

Finding and telling these stories is further impaired by the state of the U.S. economy and American media. Real international investigative coverage is expensive. There’s plenty of talk about the “pink dollar,” but LGBT media still operate on fringe budgets. And in an era of consolidating newsrooms and information made free by new media, this kind of complex coverage will become harder to do.

My own efforts in Iraq, balancing gay topics with my mainstream assignments, and those of Sharlet, where the results of international investigative work were shared by an LGBT and a mainstream publication, might become the new operative norm.

In this changing time of newsroom resources, 24-hour new media sourcing, each form of media can find a way to enhance the other. And as journalists, we’ll need to be prepared for developments in international LGBT issues. As we’ve seen time and again, advances of the LGBT community are happening overseas, and their stories need to be told.

Perhaps it will be these stories that guide the narrative here in the U.S.

(Michael Luongo is a freelance journalist based in New York. Luongo received the 2011 Sarah Pettit Memorial Award for Excellence in LGBT Media from the National Lesbian & Gay Journalists Association.)