One square, four demonstrations: a clash of beliefs in South Korea 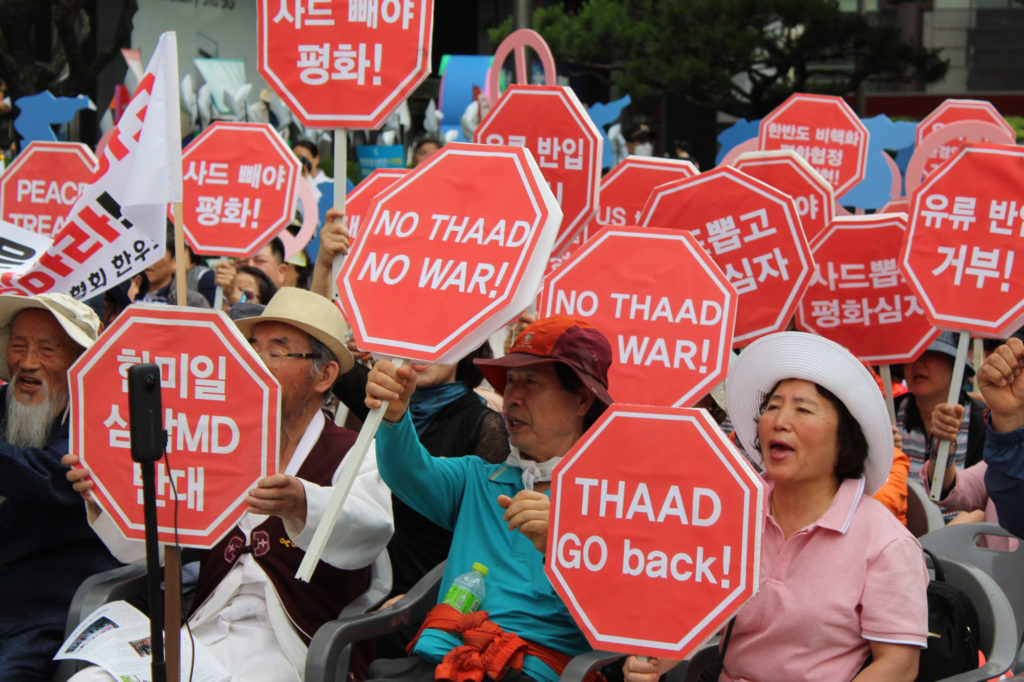 Protestors hold signs rejecting the Terminal High Altitude Area Defense (THAAD), a missile defense system the U.S. implements in South Korea to defend the country in the event of an attack from North Korea. (Photo by Kelly Kasulis/GroundTruth)

SEOUL— Hundreds — if not thousands — of Protestors carrying peace signs and cardboard cut-outs of a unified Korean peninsula filled the streets in Seoul’s Gwanghwamun Square on Saturday, just paces away from the U.S. Embassy.

The location they chose to air grievances was no coincidence: Half of the demonstrators showed up to urge the United States to loosen its hardline policies against North Korea as the one-year anniversary of the Singapore Joint Statement approaches. At the time, President Trump and North Korean leader Kim Jong Un promised to “build a lasting and stable peace regime on the Korean Peninsula.”

The summit was an utter disappointment.

As one protestor pointed out, President Trump and North Korean leader Kim Jong Un couldn’t even make it to lunch during their second face-to-face summit last February.

“I think the main reason for the Hanoi Summit’s breakdown is on the U.S., because Trump pushed denuclearization first,” said Yoo Yeong-Jae, a peace activist. “So I am here, in front of the U.S. Embassy, to call for the agreements made during the first Singapore summit and to also call for a total peace treaty.”

Yet just down the street, another pack of protesters held up American flags and made speeches urging South Korea to keep its alliance with the U.S. strong — and  stop seeking a deeper engagement with North Korea. Their parade was led by a silver car decorated with both American and South Korean flags, plus stickers of President Trump’s face that read, “ROK-US alliance strong and forever.”

In many ways, the June 1 demonstrations are the latest development in South Korea’s long standing clash of the minds. Much of the population can be divided into those who are basically pro-North and those who are pro-U.S., with more extreme views along the fringes.

The pro-North camp tends to favor engagement with North Korea, and they tend to believe that the U.S. has too much power over inter-Korean politics. They’re usually liberal, middle-aged or younger and believe in the two Koreas as one people.

Meanwhile, the pro-U.S. group — which is largely elderly, Christian and conservative — tends to hate the idea of engagement with Kim Jong Un, instead stressing a strong, wartime-era alliance with the United States to protect South Korean sovereignty.

The divide runs deep, with both sides appearing to have around the same turnout that Saturday. The pro-North demonstration looked noticeably younger, while the pro-U.S. side had more radical representation. One truck’s windshield wipers were modified so that a paper hand slapped South Korean President Moon Jae-in in the face on every swing, while another banner depicted the South Korean leader with a pig nose and a bullet going through his forehead. Others held up more radical signs calling for the freedom of South Korea’s most recent disgraced president, Park Geun-Hye, and a few marched with signs telling Chinese immigrants in South Korea to go home.

“It has been nothing but war, lies and deceit with North Korea, and [President Moon] must be blind because he cannot see that,” one protestor carrying an American flag said (he declined to provide his name). “Koreans don’t want to engage with North Korea. We want to protect our border, our country and our future.”

Despite the heavy police presence and the strong polarization of attendants, the scene was overwhelmingly peaceful. Looking at the protest, an outside observer might think that this is one of the most pressing topics in the country these days, but in reality, the West is much more invested in what’s going on in North Korea than the average south Korean, many of whom don’t care enough about inter-Korean politics to belong to either camp.

In fact, the biggest demonstration that day had nothing to do with North Korea. Just down the street from the pro-North & pro U.S protests, thousands donned themselves in rainbow flags and danced before a stage of musicians doing heavy metal renditions of American pop songs for Seoul’s largest-ever LGBTQ+ pride festival. Simultaneously, thousands more marched in opposition to the festival. under the banner of “pro-family,” touting parade floats of heterosexual couples in wedding outfits and carrying signs that read “one man + one woman = marriage” (or, more bluntly, “end gay”). South Korea is one of the lowest-ranking countries for LGBTI inclusiveness in the OECD, and six in ten South Koreans polled were against same-sex marriage in 2017.

Four different demonstrations in the same location is a testament to the changes the country has been through:   South Korea is a nation in flux, with the values of older and newer generations at a head-first collision. Nearly 70 years ago, the peninsula was divided in war. Then about 30 years ago, South Korea changed from a dictatorship to a democracy. Back then, North Korea was still carrying out big-time hostile attacks, like blowing up a Korean Air flight and killing 115 people. Peace has been either short-lived or around for a long time, depending on who you ask.

Much of South Korea’s diplomatic future with the North depends on whether or not the Trump Administration will have a change of heart on sanctions, or continue its age-old “maximum pressure” policy against Kim Jong Un. But regardless of what happens externally, the demographic and cultural dynamics inside the country will continue to provide a stage for debates about the path South Korea should take in the coming years.