ON THE GROUND IN SPRINGFIELD, OH 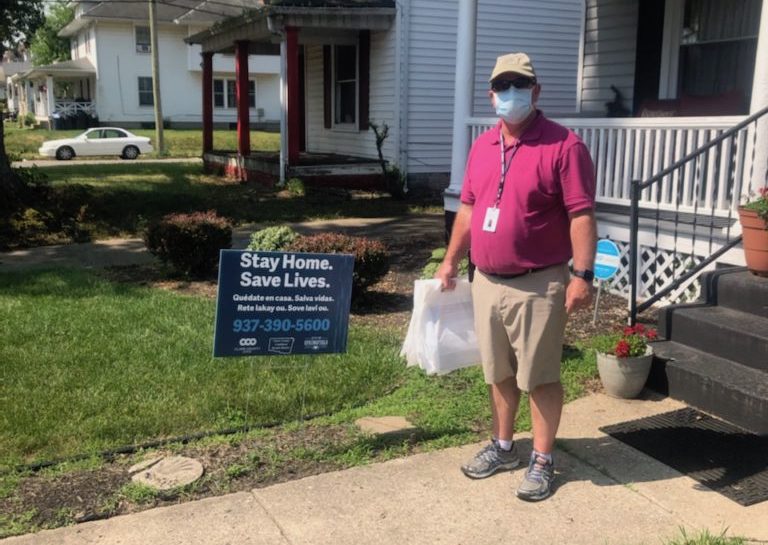 Charlie Patterson next to a COVID-19 awareness sign distributed by the Clark County Combined Health District on July 2020. (Photo by Chris Welter/WYSO)

SPRINGFIELD, OHIO — County Health Commissioner Charlie Patterson, 53, works in public health “not to get rich, but to be enriched.” In June, as he and his staff went door to door distributing COVID-19 information pamphlets to residents in Springfield, he knew the importance of what they were doing; he’s lived here for 51 years.

“We’re targeting 3,000 households in 44506 and 44505,” Patterson said, speaking to reporters in front of a church in southeast Springfield. “Those are the zip codes that came out as hotspots a couple of weeks ago.”

He said the health district has seen the highest rates of confirmed COVID-19 cases in these areas since March, when they started getting testing results back from Clark County, home to about 140,000 people in southwest Ohio.

Patterson’s work illustrates the struggle of U.S. public health officials as they desperately try to contain a virus that has already killed more than 170,000 Americans. His outreach work is especially critical as federal data shows that Black and Hispanic communities are especially vulnerable— in part because of their disproportionate dependence on low-wage jobs that can’t be done at home and reliance on public transportation.

Springfield, the county seat, is adjacent to interstates 70 and 75, making it a regional hub for food processing and distribution companies like Dole and Gordon Food Services. Both companies, which employ hundreds of local workers, did not stop operations during the pandemic. Surrounding zip codes, Patterson said, are now COVID-19 hotspots.

“Many of these folks are in essential jobs which weren’t able to shut down during the stay-at-home period,” he said, “so they’re going outside of their homes on a regular basis and potentially being exposed.”

In June, Dole had a COVID-19 outbreak at its Springfield location — more than 270 positive cases were traced to the plant. The health district provided food and housing for the Dole employees who tested positive and were unable to quarantine in their homes. Two months later, the Dole outbreak still accounts for 20% of the confirmed COVID-19 cases in Clark County.

Of Dole’s 900 employees and contractors at the Springfield plant, around 50% are native Spanish speakers and 25% speak Haitian Creole.

The Latino community in Springfield — bolstered recently by those moving from Puerto Rico to seek opportunities on the mainland in the wake of natural disasters on the island — have established vibrant cross-cultural roots here, including a chain of Mexican grocery stores, taco stands, ice cream shops and Spanish-speaking churches throughout the city. Between 4,000 to 7,000 Latino people have made Springfield their home; many originally came to the area as seasonal workers on nearby farms.

Community resources for the growing Haitian community are catching up — a few local churches now hold services in Haitian Creole.

The Clifton Avenue Corridor, the neighborhood Patterson and his team targeted with pamphlets, is where many workers live, in rundown, turn-of-the-century Victorians. Patterson said a lot of the large, drafty homes are divided into two or three subunits to keep rent and utilities low for tenants. But, on a blistering June day, Patterson remarked that only about half of the homes have air conditioning. Patterson attributed the desolate streets and sidewalks to the neighborhood’s working-class character.

“I don’t think the average public understands how many people working 24/7 it takes to run our economy, to run the gas stations, the grocery stores, the hospitals.”

It’s an area that the health district has closely monitored for almost a decade. A local university is currently tracking high levels of lead paint peeling off these homes and settling in the soil’s top layer. Samples collected from the area have measured between 400 parts per million (ppm) to as high as 10,300. Research suggests that the safe limit for children is 600 ppm.

The residents in these zip codes took another big hit in March when the only full-service grocery store in the area closed. Those without cars now take the bus to the closest grocery store, about five miles away.

Out of courtesy to those who might be inside sleeping off a third shift, Patterson didn’t knock on doors. Instead, he walked quietly across wooden porches to leave bags filled with masks and informational pamphlets on door knobs.

Patterson’s staff includes full-time, Spanish-speaking health planners. The district had to recently hire contractors fluent in Haitian-Creole to help with contact tracing. Patterson said his team are overwhelmed dealing with a pandemic in three different languages — and other dialects like the Guatemalan Quiché.

“I think that’s one of the vast improvements that’s gonna come out of the whole COVID-19,” he said. “Our system is going to be better overall every day in communicating with our citizens in a way that’s culturally and linguistically appropriate.”

The health district now uses apps like Facebook and Whatsapp to contact trace and make public announcements. But Patterson wanted to make sure they did boots-on-the-ground work as well.

Patterson noted a few 15-passenger vans on the streets, which he said were most likely provided by the staffing companies to get their contractors to and from places like the Dole plant, which is not accessible by public transportation. Patterson lamented that it’s difficult to enforce social distancing and masks in private vehicles compared to the city’s bus system.

In the last neighborhood he visited that day, a historically Black area, Patterson noted the smaller homes and lack of sidewalks.

A grandmother across the street shouted to him as she loaded kids into her minivan. “Thanks for the masks,” she said. “I got seven grandbabies in there so it’s definitely going to help.”

Patterson asked: “Do you need some more?”

“If you could afford it,” she responded.

Chris Welter covers environmental issues and climate change for WYSO Public Media. This dispatch is part of a series called “On the Ground” with Report for America, an initiative of The GroundTruth Project. Follow him on Twitter: @chriswelter.

A version of this story appeared on USA TODAY on August 18, 2020