Three generations of a multiracial, Asian American family explain why they march 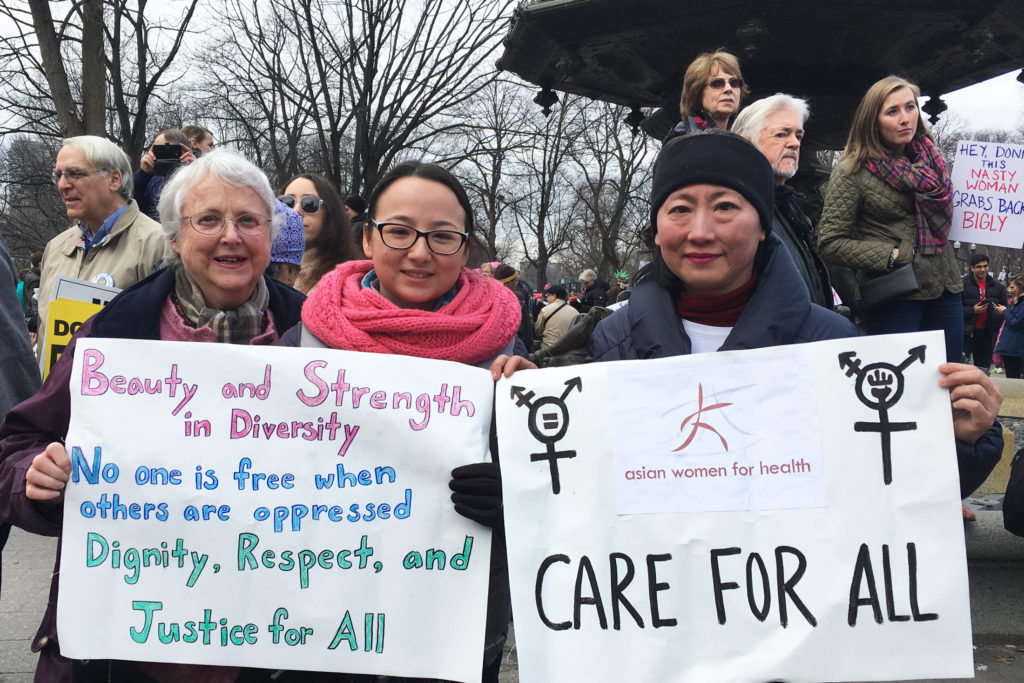 (Left to right) Claris Bergman, Samantha Bergman and Chien-Chi Huang, all part of the same family, explain why they march in Boston on Jan. 21, 2017. (Photo by Kelly Kasulis/GroundTruth)

Almost 10 years ago, Chien-Chi Huang sat in the audience of a Massachusetts Health Disparities Council meeting, taken aback by an official’s conclusion that Asian Americans experienced “low or no” tobacco use. As an immigrant from Taiwan, she knew that something was wrong. It  turns out the researchers hadn’t collected sufficient data on Asian Americans, a demographic that has long suffered the consequences of being lumped in the “other” category.

“Right there, I was like, ‘this couldn’t be,” she said. “That’s the danger of being the ones left out.”

Now, she stands outside the doors of the Boston’s Park Street subway station, tucked away in the heart of what may have been the second-largest Women’s March in the U.S. She holds a sign that says “care for all,” alongside her daughter and mother-in-law. A breast cancer survivor, Huang is serious about addressing health disparities among Asian Americans. She founded a support group called Asian Breast Cancer Project in 2010 and is a member of Asian Women for Health, an advocacy organization that trains Asian American women with language skills to teach peers about various health issues.

But today, Huang shows up just to be seen.

“We rarely see an Asian American participant in any protest or any march,” she said. “We are considered ‘the invisible.’”

Amid talk of defunding Planned Parenthood, many of the estimated 150,000+ protesters in Boston held up cardboard uteruses and signs with witty comebacks to President Trump infamous brag about grabbing women “by the pussy.” Huang believes all women should have access to health information, but barriers to health care for Asian Americans may be yet another sign of the “model minority myth” – a term that describes how Asian American issues are ignored because of a false impression that they don’t have any problems.

“To mainstream society, Asian Americans are supposed to be healthy, wealthy and well-educated,” Huang said. “As a community, we’re taught to suffer in silence.”

Another side-effect of that myth: being left out of the long list of people wronged by a xenophobic, white nationalist movement on occassion – even at a march that rails against it. Several yards behind Huang, a sign overhangs the crowd – etched in marker, it says, “Women, LGBTQ, Immigrants, Latinos, Muslims and Black people are what make America great.”

Even so, all three generations of their family say that they’re marching for others – not just for themselves – and the Women’s March itself issued a diversity statement in support of many, including Asian Americans.

“In general, it’s important to show solidarity – when Trump won the election, many people really felt that they were alone, that there was no one there to stand with them,” said 20-year-old Samantha Bergman, Huang’s daughter and a student at Smith College who calls herself “white-passing.”

“There’s a lot of potential for people of color to work together, but we need to be aware of all of the different issues that affect each of us as individuals – there’s time for you to speak up as an Asian, right? But there’s also a time for you to sit back and listen,” she said. Her grandmother, 83-year-old Claris Bergman, pats Samantha on the shoulder affectionately as she speaks.

“The rest of the world needs to know that this is the broader aspect of American society,” Claris said, gesturing at the crowd around her. Bergman, a white American, immigrated from Canada alongside her husband, an engineer, several decades ago and became a U.S. citizen in 1965.

“Just because we elected this man doesn’t mean that we go along with everything he said,” she explained. “That’s why we’re here.”