ON THE GROUND IN IN SANTA FE, NM 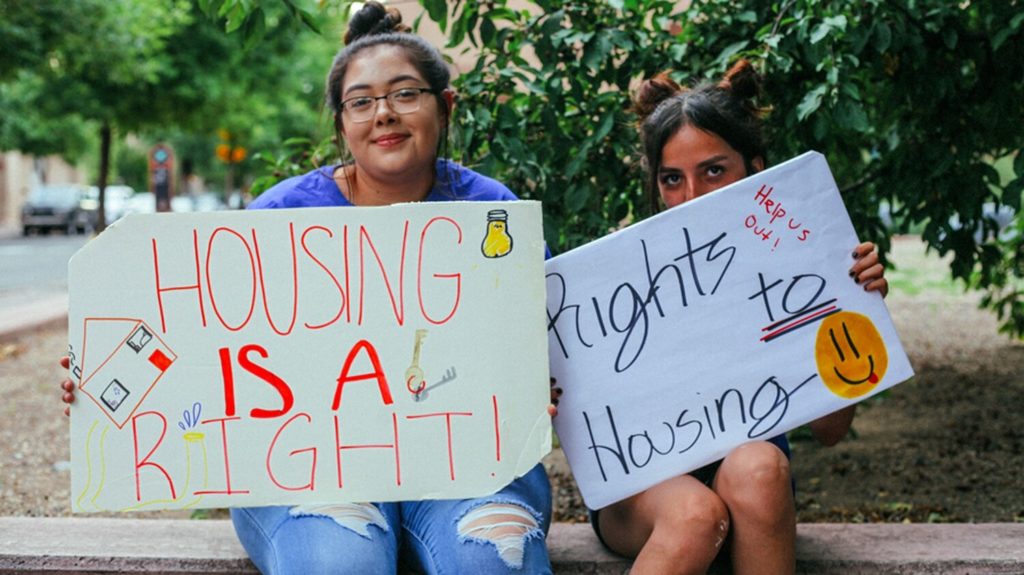 Evelyn Villegas and Amanda Esquiba sit outside of City Hall for the March for Housing rally on June 26. (Photo by Katherine Lewin/GroundTruth)

SANTE FE, N.M. – I spent my first day as a journalist in northern New Mexico wading through a trash-filled park on the city’s Southside. It was June in the desert, my neck damp under my camera strap. Abey Torrez, a longtime Southsider, placed his hands in his pockets as we stared at the small, weed-choked space that the city has refused to include in its usual maintenance route, despite years of promises to consistently do so, he tells me.

As we stood there, Torrez framed a complaint I would hear over and over again in my reporting,  from City Council chambers and nonprofit gatherings to living rooms and kitchens: the Southside of Santa Fe has been neglected for decades.

“You see the kids trying to high-step to the basketball court; it’s pretty sad to watch them,” Torrez told me as he looked out on the park’s overgrown basketball court. “You go to the Northside, where more of the money is, the parks are immaculate. They run their sprinklers, they’re lush, green. Then you come to the Southside.”

Despite having the highest concentration of young people and families, the far Southside has one park, as opposed to the north side’s well-maintained green spaces.

As the city expands to the west and south, neglect of these growing areas has led to a lack of housing, a food swamp, and abysmal staffing at the Southside Library and local schools. But this swath of the city, largely forgotten over the decades by city leaders, is a colorful, multicultural, optimistic-beyond-reason community of people who continue to inspire me.

One of my first encounters with the storied strength of the Southside came at a community building where I spent many hours over the summer. Zona del Sol, the future site of a community teen center, is the site of a youth movement protesting climate change and is currently used by various nonprofits to provide youth and adult education.

In August, in the hollow-sounding main meeting room of the building, Miguel Acosta, of EarthCare, convened the mayor, several city councilors and leaders of local law enforcement to explain how they would protect local people from ICE raids at a planned multicultural event somewhere on the Southside.

“The [Santa Fe] Dreamers movement has been about being undocumented and unafraid,” Acosta told me that night.

The fall event was eventually postponed for fear of ICE arrests and mass shootings following the attack in El Paso, Texas, particularly in a city with at least 50 public school students who are recent asylees, according to Santa Fe Public Schools Superintendent Veronica Garcia. Come winter, the community gathering was cancelled altogether.

Still, by looking to the Southside’s youth, its power is keenly reflected, such as in 23-year-old Jesús. (He didn’t give his last name because of his immigration status.)

Jesús came to Santa Fe from Chihuahua, Mexico, about two years ago. He is a single dad to a toddler and, having mostly worked in construction, was determined to make a better life for himself and his daughter. The community college in Sante Fe implemented programs to make education more accessible to all potential students, through grants for Hispanic students and its I-BEST program, which aims to increase the literacy and employability of all Santa Fe-ans.

New Mexico’s high school graduation and literacy rates are well below the national average, with the lowest public high school graduation rates in the country, and a 46% functionally illiterate population. But because of schools like SFCC, people like Jesús are on a path to success. Jesús is done with construction, thanks to the community college.

“I have done construction for all my younger years,” Jesús told me. “I’m 23 and I have a 3-year-old that really deserves the best. … This is the way to do it.”

Katherine Lewin covers Santa Fe’s Southside for the Santa Fe Reporter. This dispatch is part of a series called “On the Ground” with Report for America, an initiative of The GroundTruth Project. Follow her on Twitter: @KatherineMLewin.