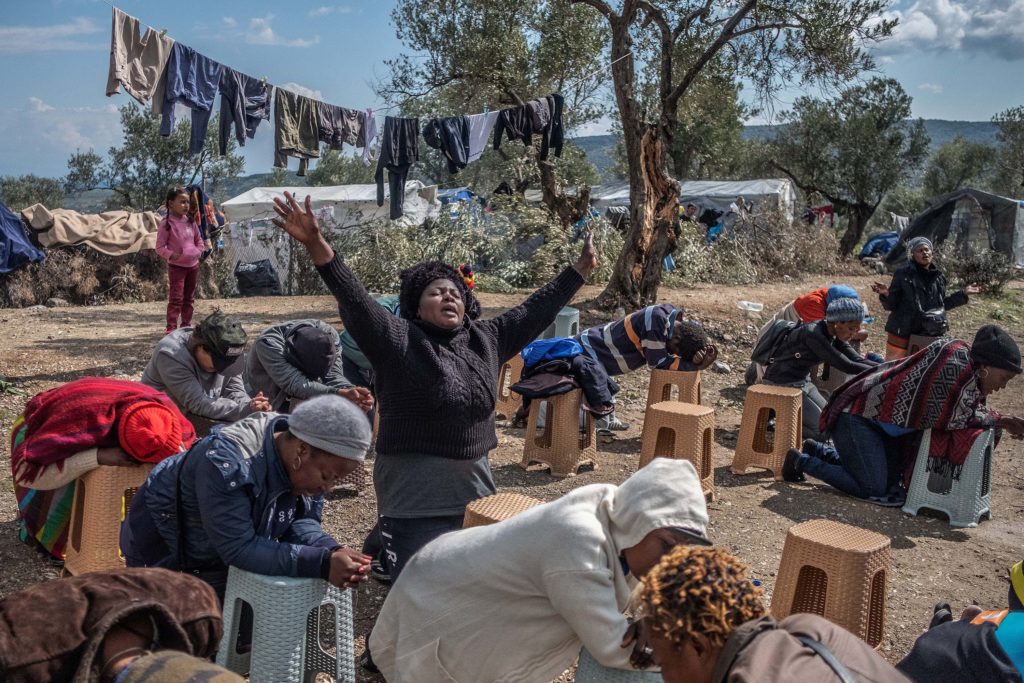 Lesbos, Greece | A woman is prayed during a religious service at a makeshift church in Moria camp. Photo: Joris van Gennip

LESBOS, Greece — After Turkey lost over 30 Turkish soldiers during an airstrike in Idlib, Syria, late last month, President Recep Tayyip Erdoğan called for a 72-hour opening of “the gates to Europe,” viewed by some as a diplomatic card trick.

As a result, thousands of migrants and refugees crossed both the land border near the Turkish city of Edirne or took their chances crossing the Aegean to Greek islands like Lesbos, which is separated from Turkey by the Mytilini Strait — as narrow as 6 miles wide in some places.

Lesbos, like other Greek islands, has turned into an Alcatraz for migrants who became stateless due to wars that Europe was, and still is, part of. And the Greeks have been on the front lines of receiving and hosting these new arrivals ever since.

Late February, Dutch aid workers from aid group Stichting Bootvluchteling went into hiding after being attacked in their cars with sticks and metal rods by an angry crowd on the island.

On March 1, groups of angry (and far-right, according to some reports) residents of Lesbos attacked NGO workers, and prevented a rubber boat full of migrants from landing on the island. The protesters then attacked journalists who were covering the refugees’ arrival, kicking and beating freelance photojournalist Michael Trammer before throwing his cameras into the water. Trammer told the Committee to Protect Journalists via messaging app that he went to a local emergency room after the attack with injuries to his head, where he received stitches and an X-ray before being released.

On the day of my departure, March 7, I visited a Dutch NGO, Movement on the Ground, operating within Moria camp. Not long after I began taking photos, volunteers spread word to fellow NGO members that we had to evacuate. Apparently, 40 neo-Nazis from Germany and France came to the island to “assist” others in preventing journalists and NGOs from doing their work.

After I returned home, news broke that a school for migrant children, established by a Jewish-Arab Israeli grassroots alliance, was set ablaze and burned to the ground. An estimated 4,000 to 5,000 refugees passed through the school prior to its destruction.

Something needs to change, and the EU’s 27 member states are behind the steering wheel.

The EU states are embroiled themselves in many of the Middle East conflicts currently forcing displaced people to head for Europe. Whether it’s providing countries like Turkey or Lebanon–hosts to millions of migrants–with more financial and structural support, or more equally distributing the responsibility for resettlement of migrants throughout the EU, member states need to find consensus about how to respond to a renewed influx of migrants and refugees to the continent. It seems the EU can respond to the  renewed crisis, but only after being forced; only a few days after Erdogan opened Turkey’s borders, Germany vowed to take care of more migrants and refugees.

I was already at Athens airport when news broke about a photojournalist being violently attacked while covering the situation on Lesbos. This, along with tons of messages from friends, family and even my newspaper warning me not to go, made me rather wary about the prospect of reporting from the island. Images of horrid boat landings published by Reuters and AFP, however, recalled memories of covering the 2015 refugee crisis, the first big influx of refugees crossing to the Greek islands, when boats of 50 people or more would arrive late at night from Turkey, delivering weary travelers into the horrid living conditions of overcrowded camps. I booked my ticket for Lesbos and headed there as soon as possible.

I’d visited the island a year and a half ago and could anticipate the conditions for migrants.  Located less than two hours outside the island’s capital, Mytilini, the official migrant camp of Moria had overflowed into the so-called “Olive Grove,” an encampment that covered the west side of the area. Today the Olive Grove has grown to surround Moria completely, a reminder of the never-ending stream of migrants and refugees coming ashore here.

Within 48 hours of my arrival, some 650 refugees and migrants arrived on the island of Lesbos. Where in 2015 the people of Lesbos were nominees for a Nobel Prize for their patience and perseverance in taking care of these new arrivals, their patience has now faded, a simmering pot threatening to boil over.