Obama at COP21: The world shares a ‘sense of urgency’ 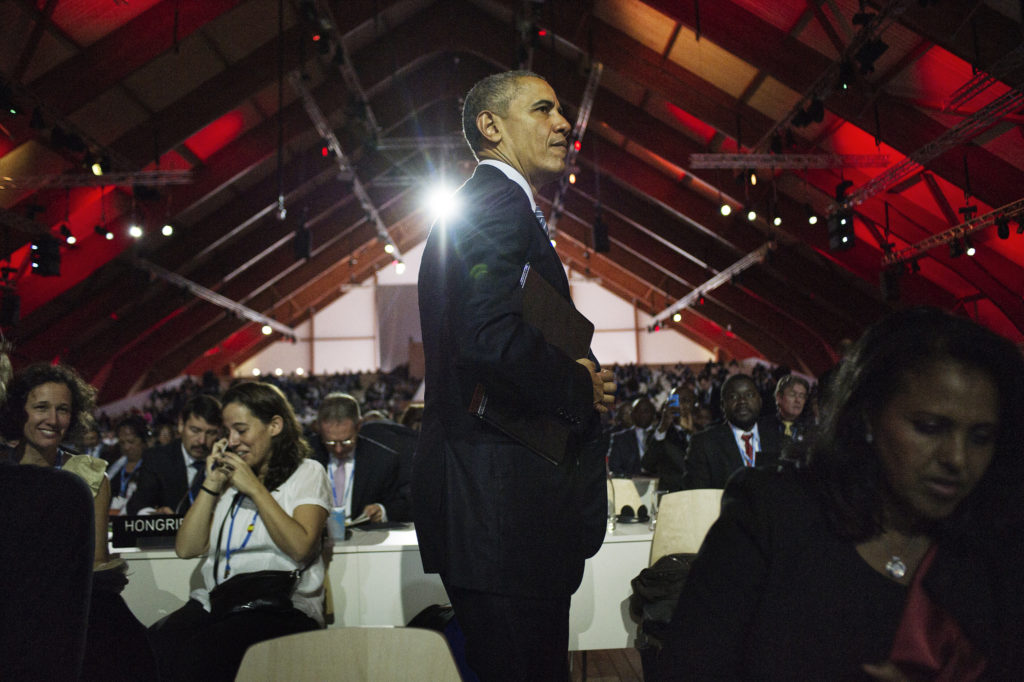 LE BOURGET, France — World leaders cast the coming two weeks of climate negotiations in hopeful terms on Monday, boasting about the climate pledges their diplomats had prepared while framing the marathon talks just north of Paris as the international community’s last chance at a meaningful agreement.

But their emphasis on cooperation here at the 21st United Nations Conference of the Parties (COP21) belies fundamental disagreements over key parts of the deal that are expected to boil over before representatives from 190 countries depart next week. Chief among those disputes could be whether the resulting document should seek to limit global warming to 2 degrees Celsius or 1.5 degrees.

In his opening remarks Monday, President Barack Obama called the event “a turning point,” echoing dozens of world leaders who addressed the UN members from a converted airport hangar in the northern suburb of Le Bourget.

“Our nations share a sense of urgency about this challenge and a growing realization that it is within our power to do something about it,” Obama said. That means crafting an agreement “that helps us lift people from poverty without condemning the next generation to a planet that’s beyond its capacity to repair.”

Yet the commitments brought to the table in advance of COP21 would put the world on track for an average global temperature rise of at least 2.7 degrees Celsius by the end of the century. That’s substantially above the 2-degree limit recommended by scientists and agreed to in 2010 by UN members when they met in Cancún, Mexico, and it’s nearly double what a coalition of the world’s least developed nations would like to see.

Despite their disagreement over the talk’s targets, the world’s least developed nations are not likely to derail the talks. During a meeting Monday dubbed the “Climate Vulnerable Forum,” Benigno Aquino III, president of the Philippines, said his nation already faces a “new normal” of extreme weather.

Failure to reach an agreement limiting global warming to even 2 degrees Celsius, he said, could mean “a new new normal.”

The implication was that a weak agreement could be built into a stronger one if nations are required to re-up their commitments every few years and ratchet down emissions reduction goals accordingly.

One key sticking point in bringing those states on board is how much the world’s richest nations should pay to help the so-called Global South develop without ramping up their greenhouse gas emissions. Egyptian President Abdel Fattah al-Sisi called it “a matter of justice and equity” that the developed nations deliver on a past promise to deposit $100 billion into the United Nations’ Green Climate Fund by 2020.

Despite announcing Monday that they would kick in another $248 million to a “Least Developed Countries Fund” over the next two years, the world’s richest nations have so far come up short. Ban Ki-moon called the lack of financing for clean development “one of the hard lessons we are learning.”

Members of the public appeared to agree with the heads of state calling for climate action, gathering for civil demonstrations in hundreds of cities around the world to call for a binding international agreement in advance of the talks. Not all of them were entirely hopeful, however, as unrest in the streets of Paris on Sunday made clear. The mood on the streets here was one of skepticism, with many protesters dismissive of the international community’s strong rhetoric about a binding climate deal.

“The quality of the Paris agreement equals the quality of life of the most vulnerable of every geography,” Figueres said. “That is the simple equation. That is the stark challenge that brings us together in Paris.”