ON THE GROUND IN CINCINNATI, OH

Northern Kentucky shelters struggle to help its homeless amid COVID-19 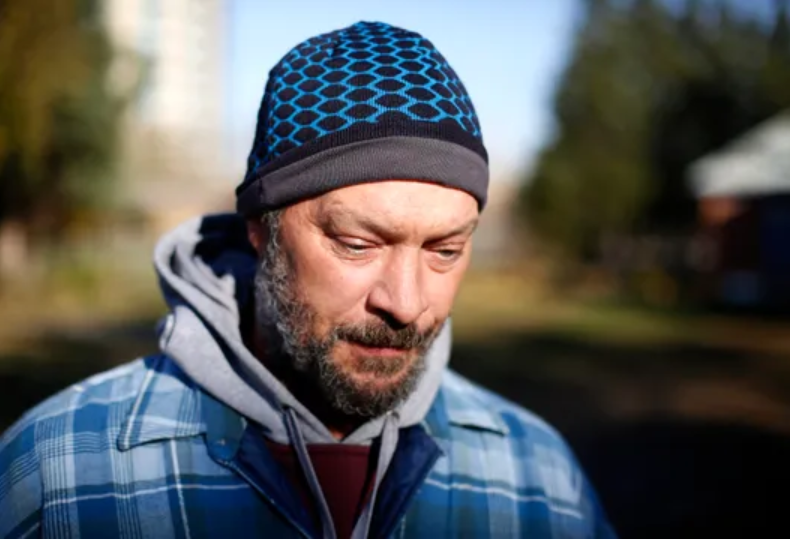 Mark Cain, 46, talks about his experience with homelessness and addiction at Goebel Park in Covington, Ky., on Friday, Nov. 8, 2019. Cain talked about an addiction to pain medication leading to the loss of his job and struggling to find employment and shelter since then. (Photo: Sam Greene/The Enquirer)

CINCINNATI, OH – Forty-six year old Mark Cain worked as a mechanic for 20 years, over the course of which he crushed three of his spinal disks. He was prescribed pain killers and by the time doctors stopped refilling them, he was addicted to opioids. Eventually he turned to heroin, lost his job, couldn’t pay rent, lost his home and didn’t have shelter for about a year. According to the Northern Kentucky Homelessness Working Group, a coalition of local nonprofits, Cain was one man among the 1,500 people in the region who were homeless last year.

Then an advocate connected Cain with Welcome House, a homelessness resource group in Covington, the largest city in the region and home to all four of its established shelters, which cumulatively serve about 400,000 people. Cain was directed to a Rapid Re-Housing Program, got a job at the Speedway gas station near Goebel Park and moved into his apartment.

The system worked in Cain’s case, but under relatively normal circumstances. In the age of COVID-19, those same agencies and the local governments that regulate them are struggling to provide increasingly crucial resources to the most at-risk, taking an acute toll on thousands of people without shelter who are uniquely vulnerable to the spread of the virus. A recent study estimated that the coronavirus could result in more than 21,000 hospitalizations and 3,400 deaths among the U.S. homeless population.

There was a history of tension between advocates and local governments well before the pandemic swept across every aspect of life, which advocates adapted to. Now they’re working around the clock to find innovative ways to serve their clients in the midst of the greatest global health crisis in modern times.

In 2019, Covington officials drafted an ordinance that would have restricted where and how shelters within city limits could operate, prompting an Ohio-based homeless advocacy group across the river, in Cincinnati, to claim the city intended “to make it impossible for shelters to operate.”

At the time, Covington was the only city with homeless shelters in Northern Kentucky. City officials expressed frustration over the lack of a regional effort to effectively serve people experiencing homelessness. And while advocates agreed that there should be more regional resources for people experiencing homelessness, they worried the restrictions in Covington could be detrimental to an already fragile system.

With the shelter closed, Executive Director Kim Webb opened a temporary shelter at the Northern Kentucky Convention Center, in Covington, with a partner agency, Welcome House, where Cain was referred. Dozens of people slept at the temporary shelter.

More adversity was on its way. The advocacy agencies, including Webb’s, pivoted to a hotel in Florence to house about 40 people experiencing homelessness, but then the hotel rescinded its offer when city leaders expressed concern over zoning regulations. As a result, advocates had to find another place to house those 40 individuals who relied on the hotel for shelter.

And though the city’s concerns aren’t unique to the region or even the nation, as the pandemic continues, resources for people experiencing homelessness must become fluid. Many cities are planning to use hotels to house the vulnerable population within safe social distancing measures. About 20 minutes away from the city, across the Ohio River in Hamilton County, elected officials voted to use $1.1 million in federal grants to keep homeless individuals in hotel rooms.

Webb’s staff at the Emergency Shelter of Northern Kentucky is meeting remotely throughout the pandemic to manage their programs in sync with shifting COVID-19 guidelines. Though necessarily reduced from 20 to just five men, the team has figured out how to keep a summer program that assists men in saving money for rent–tabulating costs and income–while they stay at the shelter. At the end of six weeks, the shelter helps them find permanent housing. It’s one small, if crucial adjustment they’ve had to make that will have a lasting impact on a few in need.

But the next chapter of history, of living through the pandemic and its impact remains unwritten, for people with homes, but particularly those without. There is no guidebook or template for operating within this extreme crisis, what Webb calls “the great equalizer.”

“This is a human decency issue, and, in some ways, maybe people are going to get a glimpse of what it means to struggle,” Webb said.