No chicken nuggets, no PB&J: Supply chain issues are on the menu at schools across the country 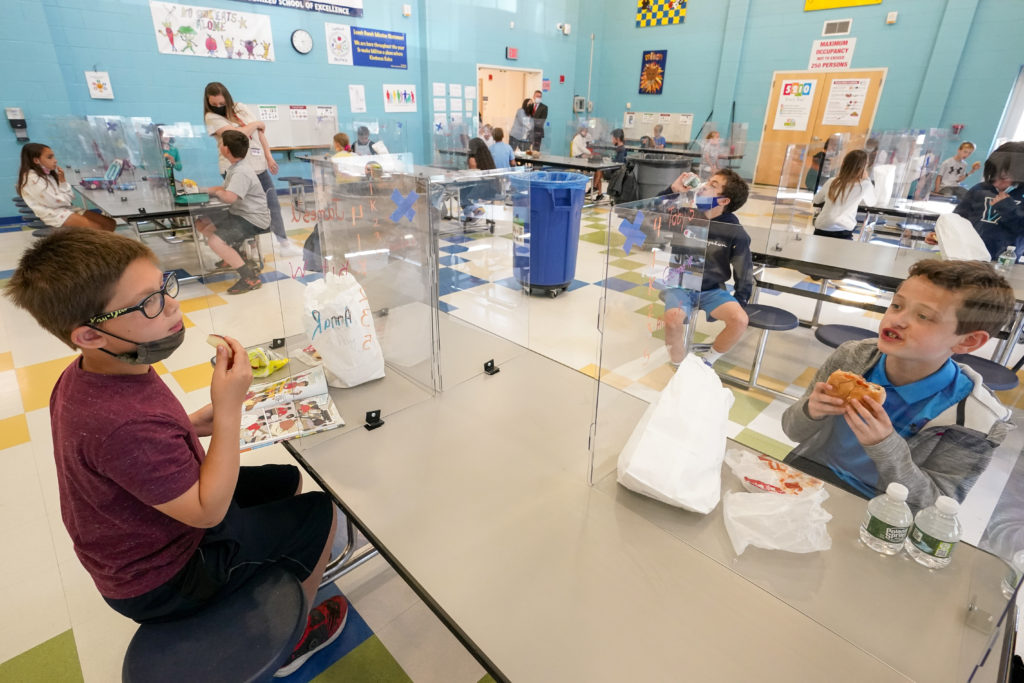 Fourth graders eat their lunches in the Milton Elementary School cafeteria in Rye, NY. Due to COVID-19, more children than ever are relying on free school lunches. (Photo by Mary Altaffer/Associated Press)

DAYTON, Ohio — It’s 5 a.m. on a Tuesday in September and the cafeteria staff at Centerville City Schools in Dayton, Ohio is busy getting the day’s first meal—breakfast—ready at the main district kitchen for the flood of kids that will enter the school buildings in a few hours. These days, though, the million dollar question for Olivia Stone, the school district’s student nutrition service supervision, is: What’s on the menu?

Given rampant supply chain snarls and out of stock items, each week has become a bit of a guessing game. “It has been unbelievably difficult to source several food items,” Stone said. “It really impacts our whole process. It’s making it almost impossible to effectively feed our kids and it’s frightening.” Of late, delivery trucks have been arriving missing such staples as frozen chicken nuggets, bread, or pre-packaged peanut butter and jelly sandwiches. Though she tries to forecast food availability for the week ahead, she usually ends up changing planned menus at least two to three times a week because of unanticipated shortages. It also disrupts her budgeting process because buying substitutes tends to be more expensive if a distributor is out of stock on a more affordable food item.

“We put these menus out and we just cross our fingers. Can we get what the kids are expecting today?” Stone said.

It all highlights how the nation’s supply chain woes—which have been exacerbated by an ongoing worker shortage—have become an added stressor on the schools that feed the country’s kids.

Some school districts, such as Beavercreek City Schools, also in Ohio, are having to make runs to Sam’s Clubs or Costco to stock on supplies that are hard to order from distributors, according to Josh Ashley, the student nutrition supervisor there.

COVID-19 safety precautions have created some challenges too. To prevent the spreading of the virus, schools are opting to serve individually wrapped items like plastic utensils or disposable trays, which are becoming harder to order through food distributors.

Food shortages are happening nationwide, although not all schools are impacted the same way, according to Diane Pratt-Heavner, a spokesperson for the National School Nutrition Association. She said some bigger school districts may be better equipped, while others might not see severe disruptions depending on the vendors available to the school.

“We have heard from school districts in every corner of the country small, medium, large, rural, suburban, urban that are struggling with supply chain issues,” Pratt-Heavner said.

Adding to the pressure? More kids are eating meals at school now.

In a typical year, schools nationwide get a reimbursement through the U.S. Department of Agriculture National Seamless Summer Option—which is a program offered through the Nation School Lunch Program (NSLP)—to serve free meals to children in the summer.

At the beginning of the pandemic, however, the federal agency extended the program for the rest of the school year to ensure government food standards were met and to keep consistently providing nutritious foods to students.

Usually, schools participating in the NSLP receive a meal reimbursement based on students’ household income and family size. In 2019, the maximum reimbursement for a free meal was $3.65 for each lunch served. In 2021, however, as part of USDA waivers, schools can receive $4.25 per lunch through the Summer Food Service Program, according to a Federal Register report.

The program waiver—which is now extended to June 2022—also means that all school meals are free to children whose school participates in the program, according to Pratt-Heavner.

At Centerville, Stone said it’s important for parents to not feel burdened with having to pay for school lunch through a pandemic. But more meals means an overburdened cafeteria staff of about 50 serving 5,000 meals per day for the school district.

W.C. Benton, an Ohio State University professor who specializes in supply chain management, said the food supply shortage is impacting all food businesses nationwide including restaurants and other private businesses, but it’s more concerning when it impacts schools.

“School districts are competing with other school districts for the same supply,” Benton said. “So naturally you’re going to have an increase in price at every level because of low supply and high demand.”

Benton said a disruption in the food chain like this is unprecedented and there’s no way to determine how long until the supply chain industry stabilizes, but rather, it depends on how the industry will adapt and find new alternatives to servicing clients. “It’s going to get worse before it gets better,” he said. “We just don’t have the drivers and warehouse workers, so someone’s going to be left out and the ones who are not left out are going to be paying prices that are beyond control.”

Beverly Stewart is food broker at Stewart Sales & Marketing in northeast Ohio. She represents manufacturers and places food orders for schools. She said some manufacturers are seeing delivery times as much as six to nine weeks for food deliveries such as frozen chicken or snacks. “Supplies are scarce because labor is scarce and people don’t show up.” Stewart said. It’s a domino effect starting with manufactures that can’t get raw materials which then impacts suppliers and then consumers depending on those supplies.

Back in Centerville, this week’s lunch menu won’t be featuring what Stone had hoped: hamburgers or peanut butter and jelly uncrustables were unavailable. But she’ll have enough to feed the kids who need meals, and she said for now the school has not asked parents to pack lunch for their children.

“I think we have a strong obligation to be sure that our kids are getting wholesome meals,” Stone said. “We will have food to feed our children, it just may not necessarily be what they’re expecting that day.”

A version of this story appeared on FORTUNE on October 21, 2021