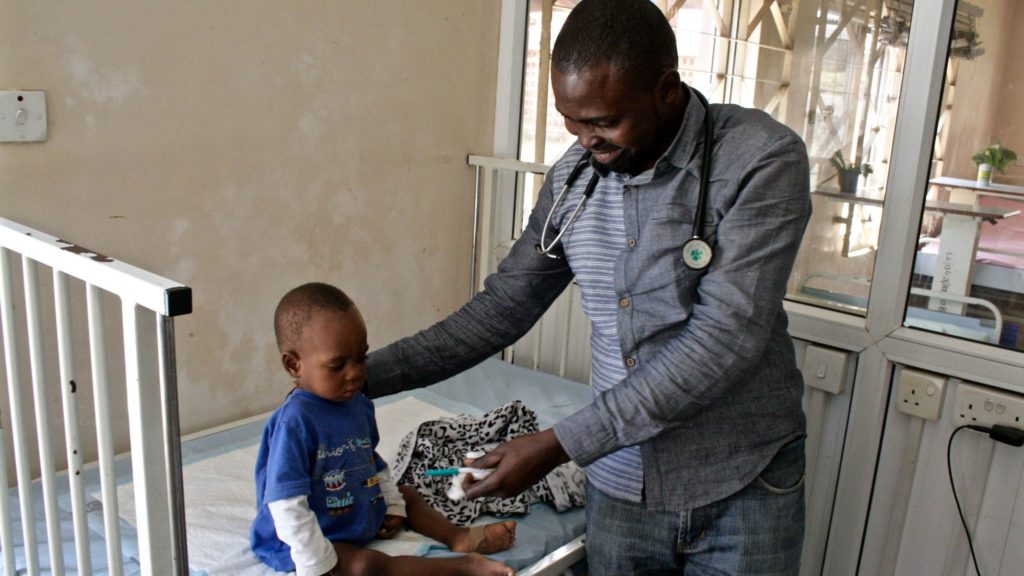 Dr. Akeem Ismail tends to a young patient who tested positive for malaria in Ikorodu’s general hospital on the outskirts of Lagos. - ()

Inside an emergency ward at Ikorodu’s general hospital on the outskirts of Lagos, 19 year-old Rafiat, dressed in a pale yellow headscarf, cradles her newborn daughter. A doctor and two nurses crowd over her tiny, motionless body, administering finger compressions and pumping air through a bag into her lungs. A day old and not yet named, the baby has tested positive for malaria and is dangerously hypoglycemic, a common and potentially fatal complication.

Across the room, another woman paces, mumbling urgent prayers through tears. Her newborn has the same symptoms. Dr. Akeem Ismail rushes between the two for 15 minutes until they’re finally stable. “Hallelujah,” he exhales.

Every day, Ismail sees up to five potentially fatal cases of malaria in infants and toddlers. His daily ledger is peppered with notes of his clinical diagnosis: severe malaria. The newborns he treated that day received a single shot of the drug artemisinin which should start clearing their bodies of the malaria parasites within hours—the difference between life and death in some cases. But in Africa’s most populous country, with the heaviest burden of malaria worldwide, the world’s frontline antimalarial is at risk.

Artemisinin was discovered in the 1970s by Chinese scientist Tu Youyou, who recently won a Nobel Prize. The drug gained favor as resistance to chloroquine, once the leading antimalarial, began to spread and cause a resurgence in malaria deaths.

Scientists were once adamant that malaria parasites could never build resistance to artemisinin, but resistance now has spread through four countries in South East Asia. “It’s serious,” Ismail says. If resistance builds in Nigeria he is concerned there could be a resurgence of malaria. He believes that the ample availability of substandard antimalarial drugs, whether due to low standard production or poor storage, and the continued use of monotherapies is endangering the efficacy of even the artemisinin combination treatments.

Monotherapies—the practice of using only one drug to fight malaria—are still widely used despite the fact that artemisinin-based combination therapy (ACT) was introduced in 2000. By matching fast-acting artemisinin with other longer-acting antimalarial drugs, this two-pronged approach more effectively clears the parasites. ACT cocktails have halved malaria deaths ever since.