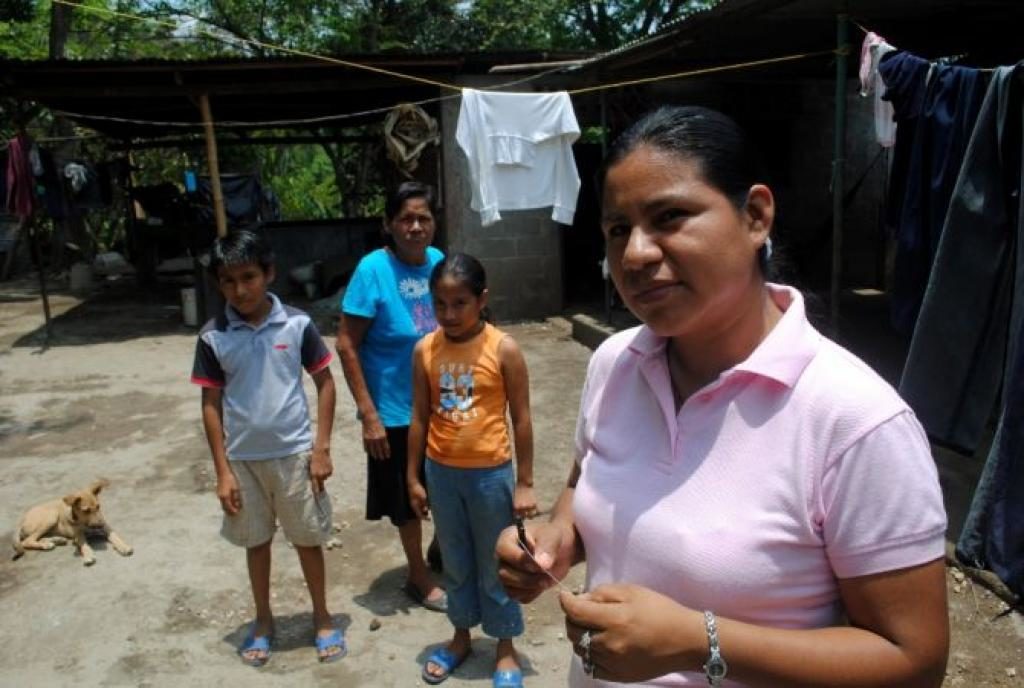 Martha Acuña at home in Masaya, Nicaragua with her mother and two children. Her husband's death in a motorcycle accident left her as the only wage-earner in the eight-member household. - ((Tim Rogers / GlobalPost))

MASAYA, Nicaragua — Martha Acuña’s day starts several hours before the roosters greet the sun from the swept-dirt yard outside her humble cinderblock home. In the predawn chill, Martha, 32, prepares breakfast for her children and extended family over a wood fire. Then she walks two kilometers to the Masaya Highway, joining dozens of other Nicaraguans waiting to take the hour-long bus ride to factory jobs in Managua’s free-trade zones — where foreign companies take advantage of the country’s cheap labor and generous tax exemptions to produce their goods.

The rest of Martha’s day is spent seated behind a sewing machine in an American-owned garment factory, where she sews the back pockets onto blue jeans for export to the US. By quitting time, she has finished 500 pairs of jeans, meeting her production quota and earning a full day’s pay of $14.34, which comes to around $11 after bus fares and lunch.

Twelve hours after leaving her house in the dimness of dawn, Martha returns home along the same road darkened by dusk. It’s hard to imagine that this is the revolutionary dream that Martha’s family — all loyal Sandinistas — had envisioned for their country and their daughter, but no one’s complaining. In fact, Martha’s family thinks things are improving with Daniel Ortega back in power.

The combination of poverty and years of neglect have made President Ortega’s “social programs,” which consist of modest handouts to poor people who are unused to getting anything from the government, very popular in a country with low expectations and many unmet needs.

“Before they never gave us anything, but this government gave us some zinc to fix our leaky roof and those chickens,” says Martha’s 60-year-old mother, Lydia de Carmen López, pointing to a pair of poultry pecking about the patio. “No government has ever given us anything until now.”

Mrs. López, who suffers from diabetes and arthritis, says she is grateful to the government that her daughter has a job to “pay for the bread of each day.” Since Martha’s husband died in a motorcycle accident, she is now the only wage-earner in her eight-member household.

Martha credits President Ortega for attracting foreign investment and creating free-trade zone jobs in response to the country’s massive unemployment problem. It might not be the socialist promise of the original Sandinista Revolution in the 1980s, but in Nicaragua — the second poorest country in the hemisphere — attracting foreign investment and creating jobs is revolutionary in its own right.

“There has been a lot of work recently; it’s better than it was before. The work conditions are good and the salaries have increased a little,” Martha says in a soft voice, sitting in a plastic chair under an avocado tree outside her home on a recent Sunday. “There is no problem when we take breaks to go to the bathroom or to drink water. No one says anything.”

Martha’s assessment of Nicaragua’s free-zones is shared by labor unions and the government: the situation isn’t ideal, but it’s improving.

The same can be said for Nicaragua. Over the past few years, Nicaragua has quietly become the fastest-growing economy in Central America (excluding Panama) in terms of exports and foreign-direct investment. And it’s happening under the careful watch of the Sandinista government.

Though the first Sandinista leadership captained Nicaragua’s economy to the bottom of the sea in the 1980s, the former Marxists have bucked the odds the second time around. Despite occasional paroxysms of revolutionary rhetoric, the current Ortega administration has managed the economy with the imprimatur of the International Monetary Fund (which has given Nicaragua a $78 million loan) and has stayed within the guidelines of neoliberal decorum.

Since Ortega returned to power in 2007, banking deposits have increased steadily, foreign reserves and exports have doubled, and foreign-direct investment has grown five-fold. No longer are Nicaraguans carrying bags full of cash to market to buy a chicken breast, like they did in 1988 when hyperinflation reached 30,000 percent.

Indeed, Nicaragua is a surprisingly new country under surprisingly old management. It’s now fully inserted in the world of globalization and free-trade agreements — with, of course, all the typical third-world nods to the halcyon days of rural farm life, such as rickety horse-drawn carts carrying firewood through downtown Managua.

Nicaragua now produces everything from textiles and garments to sneakers, shrimp, cigars and automobile harnesses — all under the free-zone regime, which provides 100 percent exemptions on most taxes and most import duties as well as unrestricted repatriation of capital.

But Nicaragua’s real benefit in the cutthroat game of global outsourcing is the unique agreement it hatched between the government, factory owners and the labor unions. The “tripartite agreement,” as it is known, is the only of its kind in Central America, making Nicaragua the only country to include labor unions as an equal partner in any sort of dialogue between foreign investors and the government.

As a result, the agreement has provided a foundation for permanent dialogue and industry stability in a sector known for corporate misconduct, government malfeasance and wildcat rabble-rousers.

Formalized in 2009 during the peak of the global economic downturn, it has also given Nicaragua the firm footing it needed to shoulder through the stormy crisis of past years and recover foreign investment quicker than any other country in Central America.

While El Salvador, Honduras and Guatemala struggle to return to their pre-2007 employment levels, Nicaragua has recovered all 17,000 factory jobs it lost in 2008, and added another 20,000 to boot. There are now 161 free-zone companies operating in Nicaragua, exporting $2 billion worth of products and employing nearly 100,000 Nicaraguans — one-sixth of the country’s entire formal-sector workforce.

The average apparel manufacturer makes $1.05 an hour — half of what a factory worker makes in Mexico. Employees like Martha claim they can barely make ends meet in a country where costs are rising faster than wages. But for the country’s uneducated masses, it’s either that or scratching together a living in the informal sector, where 70 percent of the country toils every day.

“Free-zones are a fundamental pillar in the development of the country for generating employment and a productive base that we didn’t have before,” retired Sandinista military General Alvaro Baltodano, head of the government’s National Free-Zone Commission, told GlobalPost. “If we didn’t have these free-zone jobs, there would be more emigration and more disarticulation of families.”

The Sandinista Front, which battled US-backed counterrevolutionary insurgents during a tumultuous decade in the 1980s, has not always been so generous in its appraisal of the free-zone regime. As a political opposition movement — a role the Sandinistas played aggressively for 16 years after getting voted out of power in 1990 and before returning to office in 2007 — the party criticized the maquiladoras as part of an exploitive “neoliberal economic model” and an example of “savage capitalism,” as President Ortega is wont to say.

But now that the graying revolutionaries have retaken the reins of state, they have had to assume the responsibilities that come with public office.

“Logically, it’s not the same to be in the opposition as it is to be in the government,” Baltodano says. “We have come to the conclusion that the most important thing is employment.”

The Sandinista government’s tripartite agreement, which set a graduated minimum-wage increase averaging 9 percent over three years and includes a variety of other social benefits for workers, has also laid the foundation for initiatives such as the US Department of Labor’s Better Work program, an effort to improve working conditions and compliance with labor regulations.

The program works directly with the big brand names — Gap, Levi’s, Target, Walmart, and JC Penney — to ensure their overseas supply chains are playing by the book.

While Better Work officers say they haven’t found any zero-tolerance issues in Nicaragua, such as child labor or forced labor, the program hasn’t yet established a baseline evaluation for labor conditions here. Still, the fact that the program was invited into the country in the first place is a good indication of the direction in which the Nicaraguan government wants the free-zone sector to grow, says country manager Elena Arengo.

“The government is very interested in this program; the labor piece is very important to them,” she says.

From business owners’ viewpoint, the tripartite agreement has minimized tire-burning labor protests and increased the accuracy of labor-cost projections. That allows factory owners to focus more on production orders and less on negotiating with recalcitrant union bosses shouting hackneyed revolutionary slogans through bullhorns.

The agreement also allows the Sandinistas to feel less guilty about promoting a free-market capitalist model because they can now point to their efforts to “socialize” labor conditions for the good of the working poor. In that sense, the Ortega government claims it has humanized the frigid framework of CAFTA.

The cost of free trade

Union leaders, however, are beginning to grumble that the proletariat got the short end of the stick. They claim the social element that the government so proudly trumpets is in practice being relegated by factory owners who like the wage concessions but are dragging their feet when it comes to implementing their end of the bargain.

Pedro Ortega, secretary general of the Federation of Textile Unions, says his organization filed a formal complaint with the National Free-Zone Commission on May 1, International Labor Day, accusing free-zone factory owners of noncompliance. He claims only 20 of 161 factories are respecting an agreement to help provide subsidized food baskets for workers.   Other companies, meanwhile, have allegedly denied workers access to health benefits such as free eye surgery from Cuban doctors, because that would mean missing six days of work afterwards.

In some of the smaller free-zones, Ortega says, factory owners claim they don’t recognize the tripartite agreement at all, insisting it applies only to the larger factories that take orders directly from the big brand names.

Josefa Rivera, an outspoken labor organizer with the “Maria Elena Cuadra” women’s movement, says the problem with the tripartite agreement is that it replicates a familiar pattern. She says Nicaragua always tries to fix its problems with new laws, declarations and agreements, without enforcing regulations already in place.

“Nicaragua has lots of pretty laws; they are precious. But in the end it’s us, the workers, who have to follow up and pressure companies to follow them,” Rivera says. A former garment factory worker herself, Rivera argues that poverty and underdevelopment have put the government in the desperate situation of “taking whatever comes along.”

“Women have three options for work in Nicaragua: emigration, prostitution and free-zones,” Rivera says. “The government opens the door to foreign factories because they have nothing else to offer.”

The government disagrees. Gen. Baltodano says the growth and diversification of free-zone investment in Nicaragua demonstrates the government’s commitment. The challenge ahead, he says, is to continue to cage this flighty sector and make it more stable, sustainable and regulated, so it truly becomes a part of the country’s development and poverty-alleviation efforts.

In the meantime, Martha Acuña, the reticent and hardworking factory worker from Masaya, will continue to spend her days sewing pants pockets for gringos, in hopes that someday she’ll have some money to put in her own.