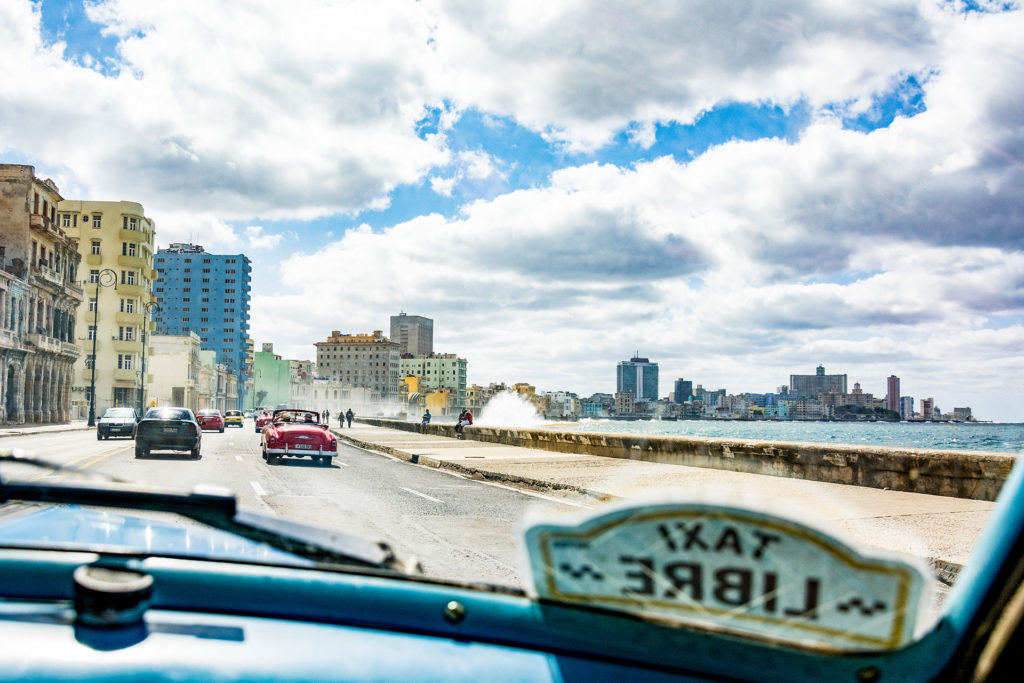 Waves crash over the Malecón, the major seaside roadway in Havana, Cuba, on March 6, 2019. (Photo by Story Hinckley/GroundTruth)

WASHINGTON — National Security Advisor John Bolton announced more steps to turn back the clock on U.S.-Cuba relations this week, also taking aim at Venezuela and Nicaragua, in an effort to “reject the forces of communism and socialism in this hemisphere—and in this country.”

“Tragically, the Obama administration’s misguided Cuba policy provided the Cuban regime with the necessary political cover to expand its malign influence and ideological imperialism across the region,” Bolton said before a group of Bay of Pigs veterans in Miami on the 58th anniversary of the failed, CIA-backed invasion of the island.

The U.S. return to a Cold War posture marks the closing of a window opened by Obama with help from Pope Francis. Cuba recently ratified a new constitution that enshrines more civil rights and expands free enterprise, but which also recommits Cuba as a socialist country in which the Communist Party is the only legitimate party. Meanwhile, religious groups and civil rights organizations in Cuba seized upon the public comment period for the new constitution as an opportunity to make themselves heard.

The GroundTruth Project, in partnership with Northeastern University and with support from the Henry Luce Foundation, recently returned from its third trip to Havana in over the past year to report on how the changes in Cuba’s relationship with the U.S. affect the people and institutions of the island.

From the long and often bitter legacy of Cuban dissidents and exiles in the United States, to the reopening of Cuba to religious practice, the installation of new Cuban President Miguel Díaz-Canel, and the transition from Obama to Trump policy, political rhetoric often belies the reality on the ground, which GroundTruth and Northeastern reporters have explored in our Special Report, “The Island.”

The longstanding U.S. sanctions, only partially rolled back by the Obama administration, have cost Cuba at least $1 billion annually while its own economic policy has carried significant costs as well. The result is a underdeveloped country with crumbling infrastructure but strong public health sector. Young professionals in Havana, who are often well-educated, lament the limited opportunities at home, and often express the desire to work in Europe, the U.S. or Canada. Local entrepreneurs have invested heavily in tourism and many of those bets are now on shaky ground due to shifts in U.S. policy.

These complex realities create complicated economic and political alliances. A common refrain shared by Cubans with American visitors is, “We have no problem with the American people, only with your government.”

The new sanctions would limit remittances by Cuban Americans to family back in Cuba, allow U.S. citizens to file lawsuits over property seized during the 1959 revolution, and again restrict non-family travel from the U.S to Cuba. Earlier this month, the Trump administration announced sanctions designed to limit Venezuela’s exports of oil to Cuba.

The new Trump policy as outlined by Bolton and underscored by Secretary of State Mike Pompeo is likely to make the situation worse, while Díaz-Canel has vowed resistance.

“The attitude will not change in face of those holding the sword against us. We Cubans don’t surrender nor do we accept laws over our destiny that are not in the Constitution. In #Cuba, Cubans are in charge. #Cuba relies in her strengths and our dignity,” Díaz-Canel tweeted in English.

As Trump’s cabinet has ramped up criticism of Venezuela’s embattled socialist president Nicolás Maduro along with Díaz-Canel, Russia has stepped in to offer support for both countries in contending with the sanctions.

Ben Rhodes, Obama’s deputy national security advisor who helped open up the relationship with Cuba, lashed out at Bolton for the shift in policy.

He tweeted this week, “John Bolton is telling Americans where they can and can’t travel. This is the opposite of freedom – it’s autocracy.”

He also shared a prediction: “Soon, Trump will no longer be President, and the inevitable direction is more engagement, more travel, and more connection between Americans and Cubans.”