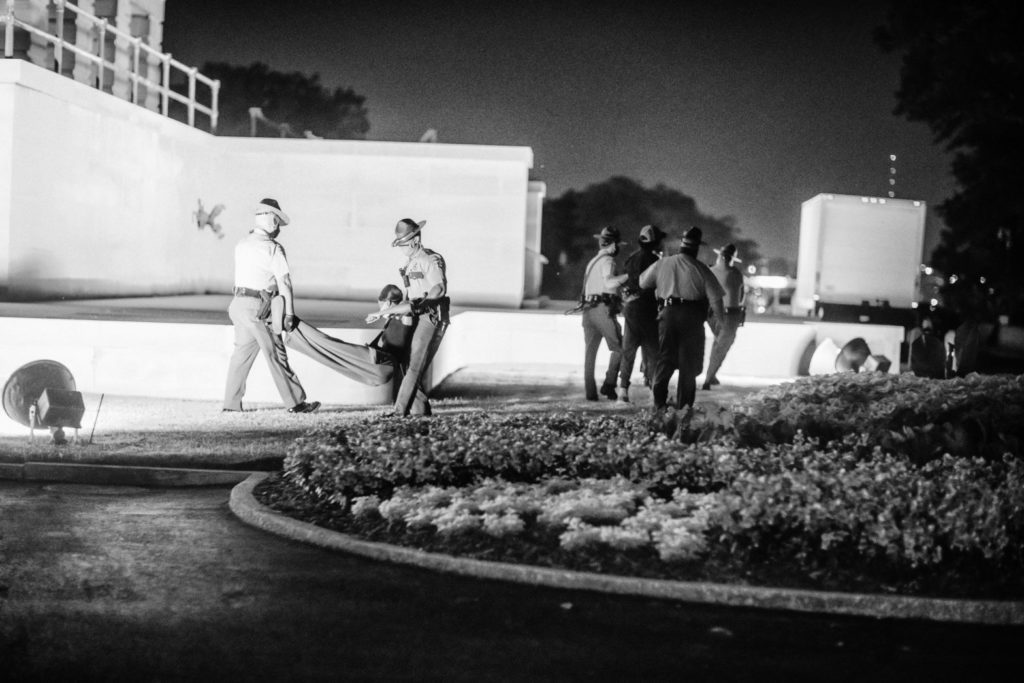 This story was originally published by Scalawag, a journalism and storytelling organization that illuminates dissent, unsettles dominant narratives, pursues justice and liberation, and stands in solidarity with marginalized people and communities in the South.

In June, large crowds of Black Lives Matter protesters occupied the plaza in front of Tennessee’s State Capitol, where inside, a 44-inch bust of the first Klu Klux Klan Grand Wizard, Nathan Bedford Forrest, has sat still in his bronze bearing for over 40 years.

A line of state troopers stood silently on the other side of the encampment, making arrests and dragging protesters away. Those who remained chained themselves to the property, chanting and playing Kendrick Lamar through loudspeakers, annoying representatives inside the capitol, and making it clear—they were not leaving until the immortalizing bust of the KKK’s first leader was removed or Governor Bill Lee would meet with them.

The group called themselves the “People’s Plaza” and hung a banner declaring the legislative square they occupied as the “Ida B. Wells Plaza” in honor of the Black investigative journalist who published a newspaper at the turn of the 20th century exposing lynchings as barbaric and calling for their end. Protesters had already torn down a statue in the plaza of Wells’ nemesis, Edward Carmack, a racist political figure who incited a white mob to burn down Wells’ newspaper office in 1892.

On tote bags adorned with Wells’ portrait and one of her quotes, protesters carried their mission: “The way to right wrongs is to shine the light of truth on them.” In fixing their light on Forrest’s statue, they hoped to steer Tennessee toward a more truthful examination of its history.

But on August 12, that history seemed to remain unexamined, as Lee announced plans to sign into law a bill passed by the legislature during a special session that would, among other things, make it a Class E felony to set up a tent outside the capitol overnight, punishable by up to six years in prison.

In Tennessee, a felony conviction revokes an individual’s right to vote.

Democrats repudiated the bill, calling it “ridiculous” and saying that minority and homeless citizens would be unfairly targeted by the so-called illegal camping law. Still, the governor signed it into law, despite saying that he himself “would have done [it] differently.”

The way this new law targets protesters is a setback for organizers trying to mobilize young Black voters on the precipice of a historic national election. Because Tennessee is one of the 11 states that doesn’t automatically restore voting rights for people who’ve served time for a felony, Black Lives Matter protesters are worried this law could strip away their voting rights indefinitely.

These sort of laws are nothing new in the South, where a long history of felony laws in particular target and suppress marginalized and Black communities. Tennessee has a Republican supermajority in Congress with little motivation to change racist laws.

But the newly-named “Ida B. Wells plaza” has an important history in voting rights, too. It was here where Black people organized for the right to vote in the 1870s, and where the NAACP protested the bust of Forrest a hundred years later.

Today, protesters in the plaza are just as committed to their goals.

“There is a lot of Confederate blood here, and people are passing these jacked up laws, trying to get rid of our voting rights, trying to make it illegal to protest,” said John Smith, an organizer of the “People’s Plaza” protest, who camped in front of the capitol for 67 days until the bill was passed.

Smith grew up in Nashville, passing out flyers and spreading the word for concerts, eventually marketing for music festivals. Those connections brought him closer to the local activist community and helped him build the relationships foundational to his work as a civil rights organizer. He started passing out flyers for Black Lives Matter protests after Trayvon Martin was murdered in 2012. Smith, now in his 40s, has since become a leading organizer for the ‘March For Justice’ Black Lives Matter rallies in Tennessee.

Motivated by the Trump administration’s civil rights violations, Smith said this election year he has focused his organizing efforts on mobilizing Black youth to vote with local nonprofits like The Equity Alliance.

The focus on Black voter turnout is due in part to Tennessee’s outdated laws that do not automatically re-enfranchise convicted felons after they served sentences, disproportionately affecting communities of color. Nearly 21 percent of the state’s Black residents are barred from voting because of Tennessee’s voter restoration laws.

While states like Iowa and Florida advanced this year in making voting more accessible, Tennessee rarely budges on felon re-enfranchisement reform. According to the ACLU of Tennessee, between 1990 and October 2019, only 13,802 people were able to restore their voting rights of more than 420,000 who had been disenfranchised.

To regain the right to vote in the state, a person with a felony conviction must be certified by their county clerk, which requires getting court fees and fines and child support paid and filling out relevant forms, among a long list of other roadblocks.

Republican Senator Steven Dickerson said of the process, “almost nobody actually does it.”

Similar hurdles exist in other states, too. Last week, New York Mayor Michael Bloomberg raised $16 million for fees in an attempt to restore voting rights for an estimated 30,000 Black and Latino voters in Florida.

As COVID-19 has created backlogs of court fees, fines, and closures at local county clerks offices, the Tennessee protestors could be stripped of their voting rights for the 2020 elections and beyond if this law is enforced.

The ACLU told Scalawag, “This dangerous bill chills free speech, undermines criminal justice reform, and fails to address the very issues of racial justice and police violence raised by the protesters who are being targeted.”

The first month the bust of Nathan Bedford Forrest was installed in 1978, it was damaged when someone struck it in the head with a blunt object.

The statue was made out of enmity: A bust of Union Admiral David Farragut prompted a lawmaker to request a Confederate statue—a decade after the construction of most Confederate monuments petered out in the wake of the Civil Rights movement.

Approved overwhelmingly by Congress, Black members of the state legislature and the NAACP called the statue an “insult.”

On the day of the busts’s unveiling, there was a mass protest at the capitol.

It wasn’t until the 2015 Charleston church shooting when a white supremacist murdered nine Black South Carolina churchgoers, including Senator Clementa C. Pinckney, that Republican Senator Bob Corker suggested Forrest’s bust should be moved. After a heated debate, the idea was ultimately rejected. After another proposal was rejected in 2017, Senate Minority Leader Lee Harris, who is Black, tweeted, “[S]eems like TN is first to go against what had become virtually a national consensus.”

Some civil rights advocates say that because Tennessee has a Republican supermajority, there is little need for making alliances with Democrats. But Florida, a Republican-controlled majority that is also considered a purple swing state, recently passed a ballot initiative that restored voting rights to citizens with a felony conviction, leaving many to wonder how Tennessee would vote on the issue if given the option.

While there has not been a major vote on this issue in Tennessee, Republicans like Dickerson and Rep. Michael Curcio—who introduced a bill last year to simplify the process of voter restoration in the state by eliminating the court fees and child support requirements and automatically granting a certificate of restoration once their sentence is complete—might bring the issue some more traction.

Still, young Black Tenneaseans like Smith feel they do not have enough representation.

For years, Tennessee was not abiding by their own Constitution which states they must redraw legislative districts every 10 years, leaving some counties with 10 times more people than some rural districts. A 1959 Supreme Court case ruled that this was unconstitutional.

Smith says that in Nashville today, he sees Davidson as an area with a large Democrat, Black population and many Black people in office, but does not feel represented at the state level.

“People in the State House represent other counties with no African Americans. It is a supermajority. You can’t get anything done,” Smith said. “They can bring back slavery if they want to. They have votes to do it.”

Forrest would have banned BLM occupiers, too

Tennessee’s racist voting history brings with it a history of civil disobedience.

In 1867, Forrest was the newly-minted leader of the KKK, founded in Tennessee. That same year, after daily demonstrations at the capitol by Black civil rights groups, the Tennessee General Assembly granted Black people the right to vote.

Across the South, the 1868 presidential election between Republican Ulysses S. Grant against Democrat Horatio Seymour was a decisive moment for Conservative Democrats to regain power.

Forrest and the KKK began a voter-intimidation campaign on behalf of the party, using tactics he learned as a Confederate general. Alexander Phillips, a Black Republican from Mississippi, wrote a letter describing the campaign of terror:

“Sir, I seat myself to write you a few lines to let you know of our troubles here. There is not a week that passes over our head but [some] of our people have their houses [broke into] by the Ku. K K and whipped taked and hung until almost dead…I hear deeds perpetrated weekly and the white [people] say that if they Black men vote the [Radical Republican] ticket and they shall suffer.”

Southern Democrats crafted new penalties for petty theft in attempts to regain political dominance in the 1870s, a move that “created a new era for how criminality shaped the construction of American citizenship,” according to Professor of History at the University of Richmond Pippa Holloway’s book, Living in Infamy: Felon Disfranchisement and the History of American Citizenship (Studies in Crime and Public Policy).

States like the Carolinas, Holloway writes, amended or revised their constitutions to limit voting rights not only for convicted felons, but also for people convicted of larceny or petit larceny as courts started to re-interpret laws to include misdemeanor-grade offenses.

“Increasing those penalties shows that the individual convicted will lose the right to vote,” said Holloway.

While there was a time the state wanted more Black voters—shortly after the Civil War, as the elections were very close, according to Marc Mauer, executive director of the Sentencing Project to Reason Magazine—by the 1870s, Tennessee developed other methods of suppression, such as fraudulent counting against Black voters.

Throughout the next decade, the South backpedaled from adhering to post-war civil rights amendments as lawmakers saw that “Klan-style” voter intimidation cut down on Republican Southern votes.

“The white southerners who passed these laws celebrate them. It’s not a hidden agenda,” said Holloway.

As the legislature recently celebrated the women’s suffrage movement with a special announcement on their website, Holloway and the ACLU both use this example to note the state’s discrepancy in signaling First Amendment rights.

“On one hand, we are celebrating certain kinds of disorderly protests. and they are passing legislation to condemn peace,” Holloway said of the new law that bans camping.

John Smith says this law is mere pressure for protesters in retaliation for the pressure the protesters have placed on legislators.

Written by GroundTruth fellow Iliana Hagenah, this story is part of a larger reporting effort by GroundTruth on voting rights in America presented with support from the Jesse and Betsy Fink Charitable Fund, Solutions Journalism Network and MacArthur Foundation. 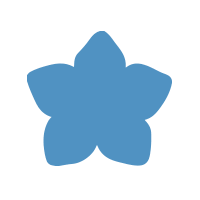 A version of this story appeared on Scalawag on September 28, 2020