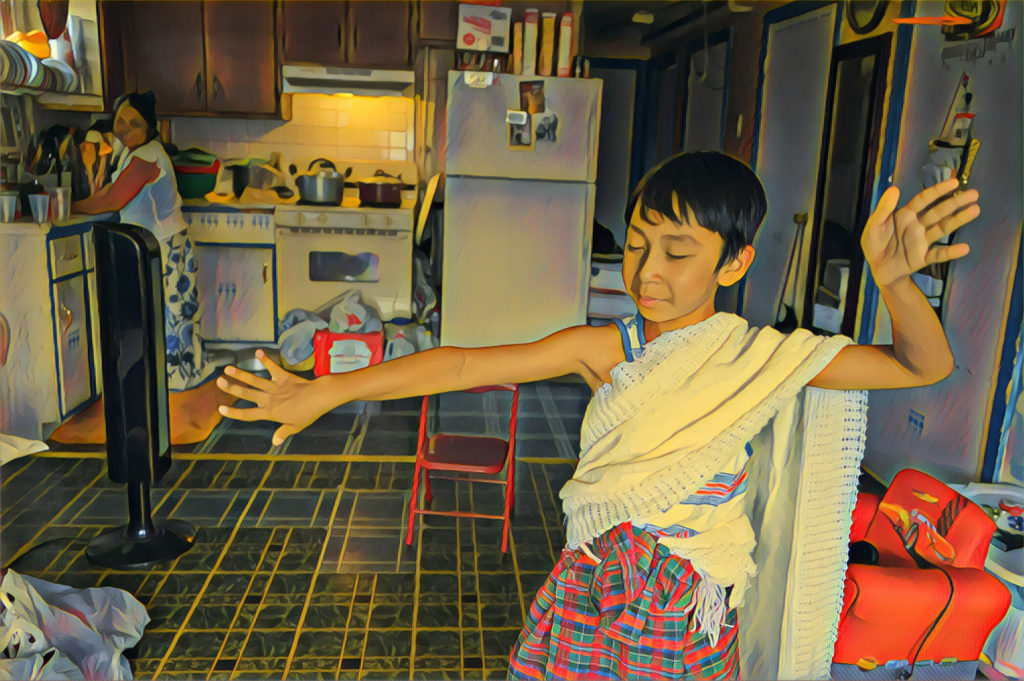 The New American Songbook is a series of five audio documentaries that explore the lives of today’s immigrants through music. (Photo by Heidi Shin with Prisma filter)

BOSTON — Today WGBH News and The GroundTruth Project launched a new season of their award-winning podcast, “GroundTruth.” The five episodes are part of a series called the “The New American Songbook,” which explores the lives of today’s immigrants through music.

The audio documentaries include the stories of a Haitian-American rapper in Boston trying to make it big back home, two young Somali women bonding over poetry on a commuter train, and a pair of intertwined musical legacies in Lowell.

The songs of immigrants have always told the story of America, and its times. The first book printed in what is now the United States was a book of songs — the tunes brought to these shores by English settlers. Centuries later, it was the descendants of African slaves who created jazz, and the children of Jewish immigrants who composed the Great American Songbook.

“The New American Songbook” explores how immigration continues to define the United States’ musical culture, and how music can help us understand the immigrant experience.

The five-part podcast series was created by Ian Coss and Heidi Shin, and is hosted by Charles Sennott, founder of The GroundTruth Project.

“The minute we heard about this idea, we were drawn to making it a season of our podcast,” Sennott said. “After our latest audio documentary highlighted the music of the Syrian diaspora, it felt so right to turn to the stories of immigrant groups who have made it to America.”

Ian Coss is a PhD student in ethnomusicology at Boston University, whose music reporting has been featured on radio programs and podcasts such as The World, Studio 360, Afropop Worldwide, and Life of the Law. He is also the co-producer sound designer for Ways of Hearing, featured on Radiotopia’s Showcase series.

Heidi Shin is a regular contributor to PRI’s The World and The BBC World Service. She is a recipient of the Asian American Journalist Association’s national award for radio/audio reporting, she’s been selected as an East-West Center Fellow, a Korean Broadcasting System International Fellow, and an Ivoh Restorative Narrative Fellow.

Essential funding for The New American Songbook was provided by Mass Humanities. Additional funding was provided by the John D. and Catherine T. MacArthur Foundation. New episodes will roll out every other week on the GroundTruth podcast. Find it on iTunes, RadioPublic, SoundCloud, Stitcher and other podcast apps, beginning September 21.

This podcast season will be coordinated with a series of live listening and discussion events in community spaces, as well as rebroadcasts of individual episodes through ethnic media outlets.

The first of these events will be Saturday, October 7, at 6 p.m. in the historic Hibernian Hall in Roxbury’s Dudley Square. It will feature excerpts from the episode “For My Ayeeyo,” along with live performances, a Q&A with the producer, and a panel discussion with local educators, scholars and community leaders.

The second listening event, for the episode “Cambodia Reincarnate,” will take place on Wednesday, October 25, at 5:30 p.m. in the Middlesex Community College Federal Building Library. Both events are free and open to the public. For new episodes and updates on live events, visit the project page.

WGBH Boston is America’s preeminent public broadcaster and the largest producer of PBS content for TV and the Web. Television channels include WGBH 2, WGBX 44, and the digital channels World and Create. WGBH Radio serves listeners across New England with 89.7 WGBH, Boston’s Local NPR®; 99.5 WCRB; and WCAI, the Cape and Islands NPR® Station.

The WGBH News team draws on the talent of a multi-platform newsroom that includes radio, television and digital reporting. The newsroom continues to invest in quality, substantive news coverage with local context and crafting the stories that only public media can tell.

The GroundTruth Project is an independent, non-profit organization dedicated to supporting and inspiring a new generation of journalists. Based at WGBH in Boston, GroundTruth focuses on social justice issues and publishes in-depth, multimedia reporting. These projects reach a wide audience through a host of editorial partnerships including PRI’s The World, PBS NewsHour, NOVA, MSNBC, Huffington Post, The Atlantic and others.

Mass Humanities conducts and supports programs that use history, literature, philosophy, and the other humanities disciplines to enhance and improve civic life in Massachusetts. Massachusetts Foundation for Humanities and Public Policy, now simply known as Mass Humanities, was established in 1974 as the state-based affiliate of the National Endowment for the Humanities (NEH). It is an independent programming and grant-making organization that receives support from the NEH and the Massachusetts Cultural Council, as well as private sources.