How to succeed in photojournalism, according to Ed Kashi 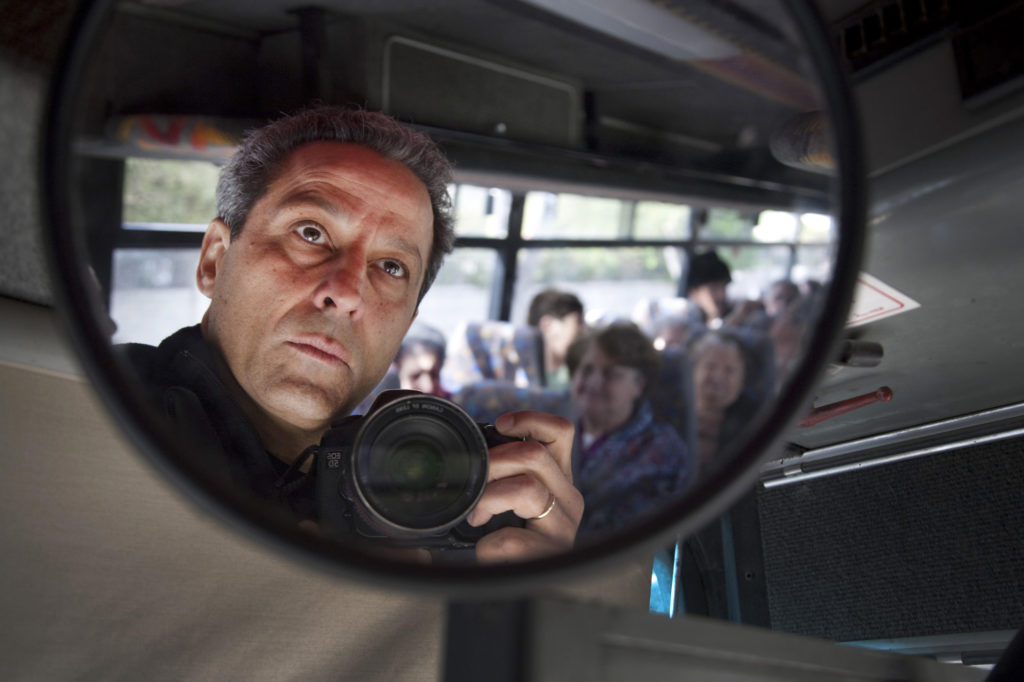 Early in his career, award-winning photojournalist and filmmaker Ed Kashi would board a plane from San Francisco and fly out to the East Coast. He’d meet as many as 30 photo editors in a single week across New York, Boston and Washington, D.C. — and though he often impressed them with his photographs of life overseas, he usually left those meetings wondering how things went.

“Someone could walk in five minutes later and take their breath away, and then I’m forgotten,” he said. “It’s just the nature of the beast.”

Kashi made a career out of producing personal projects and proposing ideas that landed in National Geographic, TIME, The New York Times Magazine and many others. These days, he’s represented by VII Photo Agency and continues to work as a photojournalist, filmmaker, author, mentor and founder of a non-profit called Talking Eyes Media. He also collaborated with The GroundTruth Project on a number of projects, including a producing and mentoring role on “The Great Divide,” a special report on global economic inequality, and an upcoming film exploring the links between climate change and Zika virus in Puerto Rico.

But even with such a long list of accomplishments, Kashi says that he’s still navigating the challenges of working in the “massively oversaturated profession” of photojournalism.

“Nothing comes easy and nothing comes for free, that’s for sure,” he said. “But there was always this sense of, ‘If I can’t do this for a career, I don’t know what else I would do.’”

He dialed in from his home in Montclair, New Jersey, offering advice and answering questions submitted by early-career photojournalists. Here’s an edited excerpt:

What advice do you have for photojournalists trying to grow their careers?

It’s the same advice I’d give myself: you’ve got to pursue personal projects. You’ve got to find issues or stories or themes that really grab you – that you really care about – because that’s when you’ll always do your best work. You don’t have to go to Afghanistan … There’s this great photographer, Paul Strand. I always loved this quote where he said something like, ‘I could spend the rest of my life photographing my back yard and never run out of subject matter.’ I know that’s very romantic, but I do like that ethos … It sometimes makes more sense to find something near you, so you can focus your resources, energy and reporting time on the subject – as opposed to battling ISIS or getting access to the military.

What’s your recipe for good photography? I know the term you use for your own work is ‘candid intimacy.’

I’m really moved when I hear someone say, ‘I can’t believe how intimate your pictures are, and it’s like you weren’t there.’ That’s what I mean by candid intimacy. I’m allowing my viewers to feel that they are close to the subject and that they’re seeing something more revealing, personal or vulnerable. But that just reflects who I am – I’m not a scientific guy. I’m the one that’s crying when I’m photographing death scenes.

What are your best pitching tips for young photojournalists without a good base of freelance connections?

If it’s someone I don’t know, or I can’t just assume knows me, I have to be brief and to the point. Do not bury the lede, and don’t send a 20-megabyte folder of pictures. Send a link. You have to assume they’re insanely busy and they have no reason to give a shit about you or your work, so you don’t want them to have to read a thousand words. And you also want to include something that gives them a reason to respond. It might be as simple as, ‘I look forward to hearing back from you.’

So, is cold pitching over email the best way to do it?

Sometimes, you really have no choice, but it’s better than nothing. It’s really hard. I have been doing this for almost 40 years now, and hardcore for almost 30 years as an international journalist – blah, blah, blah – and I am amazed at how editors of major outlets, even editors who I have worked with before, will not get back to me when I pitch ideas. So if you’re an unknown entity, it can be really daunting. We in some ways face the same mountains to climb, which is that editors are overwhelmed and deluged. They’re also in a position of power; it’s just the nature of the beast. That’s why I’ve always felt – and I live it today, still – that you have to do your own work, because that is the one thing they cannot take away from you.

Then what’s the ideal strategy for getting noticed by editors?

Try to have multiple things – if you’ve won an award, have a strong social media presence, have a great website or Instagram feed, or you get published – then you have more ways to get to [an editor’s] attention.

I know for a fact that major photo editors troll Instagram to find new talent, which is kind of freaky to me, but I guess that’s the world we’re in now. Some editors will say that on your Instagram feed you should have a consistent look and feel, they don’t want to see the pictures of your boyfriend, family, whatever – that you should have almost like a portfolio.

What other skills do you need to be successful?

In today’s world, it’s not just enough to do still photography if you want a [full-time] job. You have to be able to capture sound, shoot motion and maybe even edit. If you can’t get work to film or shoot, you can at least get hired to do post-production for other photographers or help cut videos by knowing Premiere. That might not be what you dreamed of doing, but it is a way to stay in the profession, learn more and make a living.

What do you think about photographers who split their time between photojournalism and commercial work? Does it hurt their journalistic integrity?

It’s such bullshit, the idea that you’ve sold out by doing commercial photography. The Magnum photographers of the 70s and 80s – the majority of the work they did were annual reports for major corporations. They were not making a living shooting for National Geographic or LIFE magazine.

Bruce Davidson – this is a guy who made his mark in the 50s photographing gangs in New York City and African American life in tenement housing and then creating seminal work covering the civil rights movement of the early 1960s. But you know, the majority of what he did was corporate work. So, this idea of commercial work to me is like, ‘Hell yeah! If I’m getting a job that pays me three or four thousand dollars in a day, that buys a lot of rental cars or flights to do my personal work, and pay my bills.’

Do you ever feel discouraged by what photojournalism pays?

Yeah, a makeup artist on a fashion shoot makes more than I do on an assignment for National Geographic. You need to face that fact. This is one of the lowest-paying parts of the profession of photography. It’s getting harder and harder with the disruption in the world of photojournalism, especially the loss of income from archival resale of our work and the dearth of editorial assignments. We need to find other sources of income, whether it’s commercial work, lecturing, teaching, book sales or corporate work.

In other words, you have to really love it. Right?

Yes. This is not a profession for the weak at heart. That doesn’t mean that if you can’t make it, there’s something wrong with you. Sometimes, I wonder if you do make it in this field, if that means there is something wrong with you (laughs).  But just to say that I want to follow my passion in life, I’m in a position of privilege. So have humility and compassion – and when you have those qualities, then you can withstand the smell of shit and urine in that underpass, or you can withstand being with rebel fighters pinned down, because there’s this greater mission or belief in what you’re doing and the purpose of it.