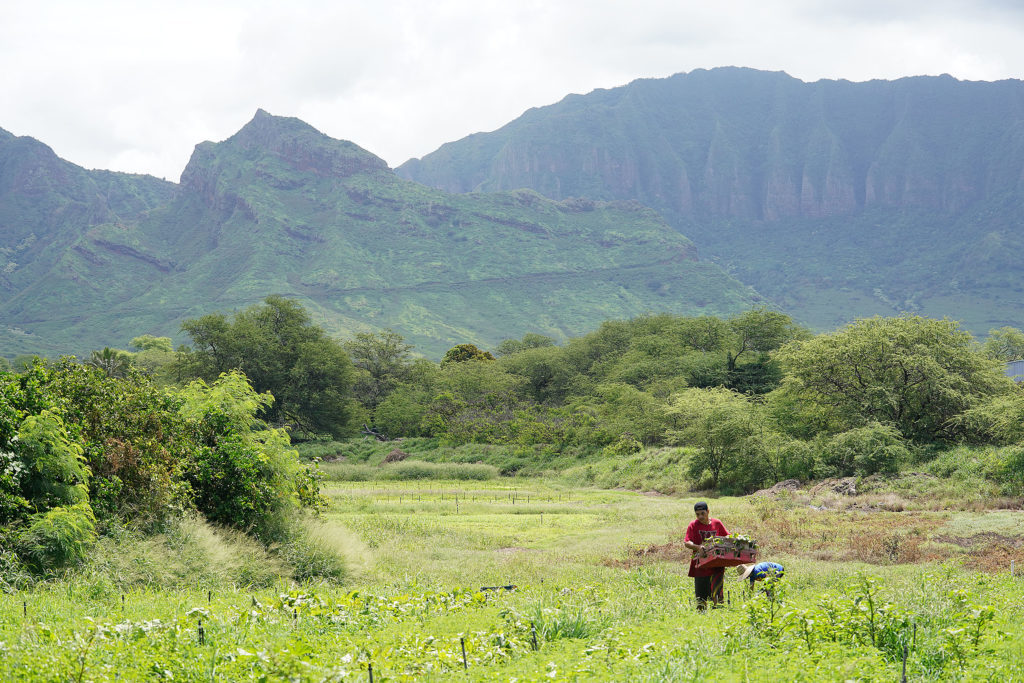 HONOLULU — Up Highway 93, on the Hawaiian island of Oahu’s west coast, the crisp air and crystalline water beckon from Makaha Beach. Urban Honolulu and touristy Waikiki fade into the distance — here, one can imagine an ancient Hawaii, of shores pocked with salt ponds and deep valleys flushed with kalo lo‘i, or taro fields.

Centuries ago, before the golf resorts, fast food strip malls, dialysis centers and waste landfills, Oahu was divided into land slivers, called ahupua’a, which still mark the land from summit to shore. Native Hawaiians used the ahupua’a system — a socioeconomic, geographic and climatic subdivision of land — to sustainably source food in tune with the seasons, never taking too much, sharing with neighbors and caring for the earth in return for the bounty it provided, a traditional practice today’s locals are trying to revive and maintain.

Numerous farms in Wai‘anae, Oahu, have taken that legacy to heart, such as Kahumana Organic Farms and Ka‘ala Farms, which produce local organic vegetables and serve as cultural centers for the public to learn more about sustainable agriculture.

National surveys have consistently ranked Hawaii, the 50th state to join the union, as among the healthiest in the nation, but these national metrics consistently miss the nuances and inequities of health in Hawaii, where disparities between Native Hawaiians and other groups are stark. Certain inequities, such as the higher rates of preventable diseases like heart disease among Native Hawaiians, are commonly regarded through narrow, simplistic metrics and incomplete understandings of complex sociocultural, economic and historical intersections.

“How we nourish the land agriculturally is how we have to nourish our own kino (body). Our kino is the kino of the ʻāina,” says Kukui Maunakea-Forth, the executive director of MA‘O Organic Farms.

At MA‘O, established in 2001, the energy is palpable. At the center of the vast green basin of Lualualei Valley sits its production center. Pop music and reggae waft through the space, its floor slick with water as interns power-wash the day’s crop: taro, breadfruit, arugula and radishes.

“Ma‘o” on its own translates to “green” in Hawaiian, but the word also serves as a kind of acronym, representing “youth food garden.” On top of their full-time school work, these teen interns receive training and a monthly stipend to prepare more than 3,000 pounds of fresh fruits and vegetables each week, for restaurants, grocers and markets.

Access to nutritious food is out of economic reach for many, since most food products are imported, adding to the price tag. A gallon of even locally-produced milk (which still relies on imported feed for dairy cows) can cost up to $9 a gallon. The cost of poi, a nutritious staple of the Hawaiian diet, now costs as much as $10 for 16 ounces at the grocery store because of limited taro production, which has decreased over time.

To address these prohibitive costs and shift the island’s dependence to indigenous farming, MA‘O is producing nutritious staple crops for the local community. While its salad greens may come at a steeper price than, say, lettuce imported from California, the farm is moving the needle. The farm’s interns tell me working on the farm and taking produce home has a direct impact on their health, and their healthier eating habits have, as a result, also been adopted by their ‘ohana, or family.

It’s not just MA‘O that has successfully implemented culturally-rooted public health solutions. Numerous community leaders across the islands understand the need to go upstream — literally and figuratively — to change the current trajectory. And the solutions they promote and share are found, not surprisingly, at the roots of Hawaiian culture.

In Waimanalo, on Oahu’s east coast, a university and community partnership is empowering families to build and implement their own aquaponics systems — a method of fish and vegetable production using tanks — to raise tilapia and grow vegetables and herbs.

The practice of hula dancing has now been scientifically demonstrated by the University of Hawaii to be an incredibly beneficial activity for reducing the risk for heart disease. It also improves the dancers’ overall wellbeing, and discussions are underway to make it a benefit offered by health insurance plans.

And at the University of Hawaii, a former career social work educator and esteemed elder emerged from retirement to offer lectures on ho’oponopono, or conflict resolution, as a class for public health majors.

These examples of resilience shine brilliantly, but there is a long way to go. Just a few minutes away from MA‘O and steps from the turquoise water sits a new six-acre development where a local health clinic sits adjacent to a dialysis center, a Wendy’s, Taco Bell, Starbucks, L&L Barbeque and Pizza Hut. It was developed in partnership with the local Hawaiian Homestead community association and community development board.

But the commercial center feels personal to Alika Maunakea, who was born and raised in Waianae, where the center is located. He works as an epigeneticist at the University of Hawaii and has family ties to MA’O Organic Farm. He believes the land was meant for aloha ʻāina purposes, to improve the health and well-being of Hawaiians, rather than contribute to preventable health problems.

“We need alternatives that provide a means to engage in healthier lifestyles, not a continued cycle of the status quo that we know is failing us,” he says.

A version of this story appeared on USA TODAY on February 13, 2020