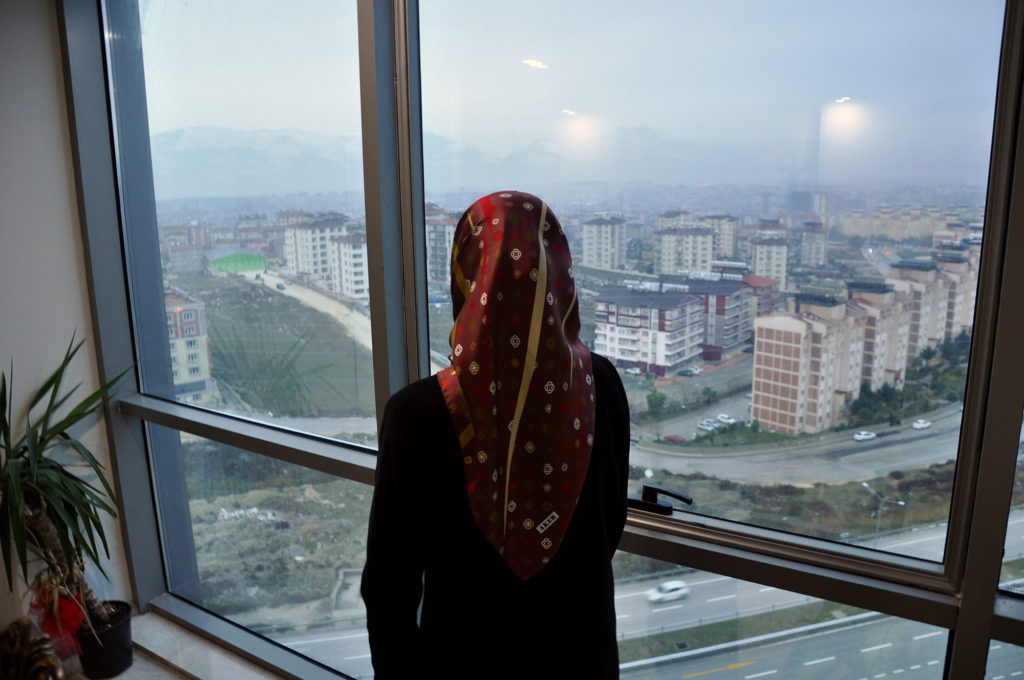 Kubra Golge (pictured) says her husband, Serkan, has been held on bogus charges by the Turkish government. (Lauren Bohn/GroundTruth)

Last year on the eve of Ramadan, Islam’s holy month, Kubra Golge was tending to her garden in Houston and celebrating the birth of her second child.

This year, she’s crying in the halls of Kafkaesque courts in southern Turkey, pleading for justice in a terrorism case against her husband that has come to symbolize the volatile state of Turkey and its imperiled judiciary.

On May 26, Turkish judges once again extended the imprisonment of Serkan Golge, a Turkish-American who until last year was a senior research scientist at NASA, studying the effects of space radiation on humans in advance of an eventual mission to Mars.

Golge first traveled to the United States in 2003 to pursue a Ph.D. in physics at Virginia’s Old Dominion University. Golge, who graduated in 2010 and was granted American citizenship in the same year, has been working for NASA as a senior research scientist since 2013. He has published several articles in prestigious science publications, such as the Journal of Applied Physics.

“If I had not been arrested upon a flagrant slander on July 23, 2016, I at the moment would be continuing research in my office at NASA as one of the few Turks among the thousands of scientists and engineers who are working in the manned trip to Mars project,” Serkan said during the first trial.

The 37-year-old physicist has been imprisoned for the past 11 months, mostly under solitary confinement, accused of being a member of what the Turkish government calls FETO, the Fethullahist Terrorist Organization. The government believes the organization, otherwise known as the Gulen movement, orchestrated the coup attempt against President Recep Tayyip Erdogan last July. The leader of the movement, cleric Fethullah Gulen, was once a close ally of Erdogan and now lives in self-imposed exile in Pennsylvania.

Golge denies being a Gulenist and having anything to do with the coup attempt. He is one of more than 50,000 people imprisoned in the aftermath of the coup, including journalists, diplomats, and human rights activists.

His first hearing on April 17 was the only time his relatives had seen him in nine months, and they gasped at the sight of him. He has lost more than 25 pounds since his imprisonment.

Golge’s case takes place at a time of heightened nationalism and widespread paranoia in Turkey. He was detained last July while leaving his family’s home in southern Turkey after a one-month vacation with his wife and two children. The police received information from an informant accusing Golge of working with the CIA and being a secret member of FETO.

“There are no words to describe that moment,” Golge’s wife, Kubra, recalled. “It’s like we are living in a horror movie.”

Upon searching his family’s home, police said they found the only evidence in the case against him: a $1 bill. The government holds that this is evidence of FETO membership. Gulen allegedly gave blessed $1 bills to its followers (note: There are 11.7 billion $1 bills in the world).

The police found the $1 bill on their second search of Golge’s home and said they found it in a scrapbook-like box, filled with souvenirs from travels, in Golge’s brother’s room. Serkan denies that it belongs to him, and his lawyer argued during the trial that it could have been planted by the police, who Golge alleged propositioned him several times to spy for them in the United States.

Since Golge’s imprisonment, Kubra and their two children have stayed in southern Turkey. If they leave, they fear they would never be able to enter the country or see Golge again.

During the May 26 hearing, Golge opted to be video conferenced in from his prison 37 miles away, rather than be transported to the courthouse. Before his first trial — in which one of the judges fell asleep — he was handcuffed in a room for 10 hours; he didn’t want to go through the humiliation again.

The hearing was meant to be a turning point in Golge’s case. The court had summoned the man who provided the tipoff accusing Golge of being a Gulenist, who is the brother of Serkan’s sister’s husband. The family says the man, who had seen Golge only a few times in his life, has always been jealous of Golge and has disputed inheritance terms with the family.

“I have no evidence, only suspicions … as he works in the U.S., I thought he could be working for the CIA,” the man told the judges. “You should know whether he is a criminal or not. … I took into consideration my president’s calls to help the state.”

Shortly after the coup attempt, Erdogan called upon citizens to report suspected Gulen followers. In just three months, the number of tipoffs skyrocketed to 40,000 in the capital city of Ankara alone. Despite the tipster’s admission of mere suspicion, the panel of judges wasn’t convinced of Golge’s innocence. They issued their verdict in seconds: “Continuation of imprisonment,” noting that they will examine Golge’s phone records.

His next trial is scheduled for July 4 — U.S. Independence Day.

Golge is not the only American behind bars in Turkey at the moment. During their meeting on May 16, President Donald Trump asked Erdogan to release American pastor Andrew Brunson, who has been in prison for seven months and whom pro-government Turkish media have accused of being a CIA operative. Trump did not mention Golge during his meeting with Erdogan.

According to the Helsinki Commission, along with Brunson and Golge, at least seven more American citizens are currently jailed in Turkey. While U.S. Embassy officials can visit Brunson, they cannot visit Golge because he is also a Turkish citizen.

A representative from the U.S. Consulate in Adana was present for Golge’s first two trials, fastidiously taking notes. “We remain concerned for Mr. Golge and have raised his case with Turkish authorities,” a State Department official told Foreign Policy. “Although the United States does not have a legal right to access dual U.S.-Turkish citizens detained in Turkey, we continue to press for such access as a matter of courtesy.”

Recent political developments in Turkey could make it even more difficult for Golge to win his freedom. Turkey’s April referendum granted Erdogan more presidential powers, including greater sway over the judiciary.

“One of the president’s priorities is to ensure greater control of the courts,” says Emma Sinclair-Webb, Turkey director for Human Rights Watch. “There will be less chance than ever of courts in Turkey being able to take decisions that are independent of the executive and based on the merits of the case.”

One of the constitutional changes approved in the referendum took effect in May, and granted Erdogan more authority in appointments to the Council of Judges and Prosecutors (CJP). The CJP oversees the appointment, promotion, transfer, or dismissal of judges and prosecutors. In March, the CJP suspended three judges who had ordered the release of 21 journalists jailed after the coup attempt.

“Getting control over this body thus means getting control over judges and public prosecutors,” the Council of Europe’s Venice Commission wrote in an April 16 report, “especially in a country where the dismissal of judges has become frequent and where transfers of judges are a common practice.” After the coup attempt, about 4,000 judges and prosecutors — almost one-fourth of the country’s total — were purged.

Back at Golge’s trial, his family covered their faces in anguish as they walked out of the courtroom. Before the video line was disconnected, Golge tried to sit up straight in his oversized gray suit, his face awash in confusion. His two children were at his parents’ home in southern Turkey, waiting for answers to questions they could barely even understand: When is their father coming back? When will they play again in their Houston backyard?

“Justice, justice, justice!” Kubra cried in the courtroom. Outside, a famous saying by Mustafa Kemal Ataturk, the founder of the modern Turkish republic, was engraved on a wall: “How happy is the one who says I am a Turk.”

A version of this story appeared on Foreign Policy on June 30, 2017