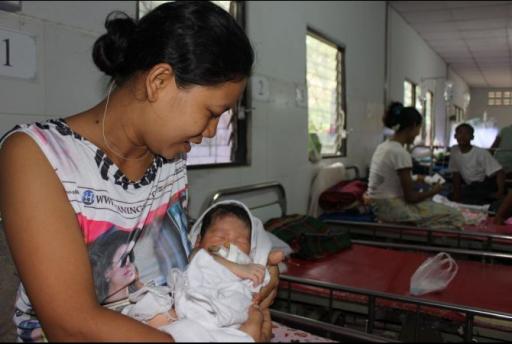 Aye Aye Thu, 30, from Myawaddy Division in Myanmar pictured at the Mae Tao Clinic in Mae Sot, Thailand with her newborn girl. Like many women unable to find quality, affordable health care in Myanmar, she crossed the border into Thailand to give birth. - (Hannah Ingber / GlobalPost)

MAE SOT, Thailand — Maw Lwin Khine lives with her husband in a small wooden home with a thatch roof. They don’t have electricity, running water or a phone. The couple sells flowers, earning roughly 2,500 kyats (US$3) a day.

Maw Lwin Khine’s aunts packed up food, loaded her into a horse cart and took her to a hospital in eastern Myanmar’s Karen State. Her husband followed on a bicycle. At the hospital, the doctor determined that Maw Lwin Khin, 28, had high blood pressure and needed a Caesarian section. The doctor performed the operation, but the baby had already died.

The difficulties did not end there.

The government-run hospital charged 200,000 kyats for the operation and another 300,000 for medicine and supplies. The couple pulled together their life savings and borrowed the rest – about 455,000 kyats – from friends.

Two weeks later, Maw Lwin Khine became sick again. She had a high fever and her body swelled up. The couple couldn’t afford to return to the hospital. Instead, they decided to visit a clinic in neighboring Thailand that offers free health care and serves Burmese. They borrowed 26,000 kyats and traveled 11 hours to Mae Sot, a border town in Thailand.

Recent news coverage of Myanmar has focused on promising developments in this long-suffering nation: the nascent political reforms, the election of Nobel laureate Aung San Suu Kyi to parliament, and the West’s suspension of sanctions.

However, little attention has been paid to a more immediate need: affordable, decent health care.

Thanks to restrictive policies and a lack of investment, Myanmar’s current health care system is a disaster. Patients like Maw Lwin Khine are so desperate for affordable, quality medical attention that they travel long distances to cross an international border to get it.

“We had no money left so we decided to come here,” Maw Lwin Khine said at Mae Tao Clinic. Her cheeks looked puffy, her lips swollen and her eyes heavy with exhaustion. Yet she said she felt better. She said she has received good care, and for free.

Half of the patients at Mae Tao Clinic, which began as one house in 1989 and now spreads over a large compound and serves more than 100,000 people a year, come from inside Myanmar, also known as Burma. The other patients are Burmese migrants living in Thailand.

“Word of mouth in Burma has brought so many women from such far places because they’re desperate,” said Meredith Walsh, who for the past five years has worked at the clinic as a reproductive health technical advisor. She said she has seen patients come from as far as Rakhine State in western Myanmar.

The military junta that ruled the country for a half century spent very little on health care — roughly 2 percent of GDP in 2009, according to the World Health Organization. By comparison, the United States spent eight times more of its GDP. Neighboring Thailand spent more than double.

The international community has donated limited resources to Myanmar because of difficulties ensuring the money gets into the right hands.

“Relative to its population and income, Burma is one of the world’s smallest recipients of international assistance,” economist Joseph Stiglitz wrote during a trip to Yangon in March.

In addition to resources, the government restricts where and how aid organizations can operate, blocking the delivery of medical services.

The result has been a health care system that in conflict areas, does not exist, and in large cities, is too expensive for ordinary people, according to experts inside Myanmar and on the Thai border.

Since Myanmar gained independence from the British in 1948, it has been wracked by armed conflicts and fragile ceasefires with civilians and ethnic rebels. In areas that are disputed or that have fragile ceasefires, services are extremely limited, according to Human Rights Watch senior Asia researcher David Mathieson.

During fighting, the army has even destroyed clinics, Mathieson said, sending mortar rounds into a village to disperse residents before destroying all civilian infrastructure including health facilities.

The health of Myanmar’s women has been one of the biggest casualties.

In eastern Myanmar, the number spikes to 721 deaths per 100,000 live births. In conflict-affected areas, mothers die in more than one out of every hundred births, according to a 2012 report by Ibis Reproductive Health.

“It really all comes down to the lack of access for basic reproductive health care,” said Cari Siestra, one of the report’s authors.

Most women give birth on their own or with an unskilled traditional birth attendant. There are few clinics available for complications, and those that exist have limited medications or procedure options, Siestra said. The lack of access to skilled birth attendants and lack of knowledge about emergency obstetric care leads to the high number of maternal deaths in the region, according to the Ibis report.

The government — long wary of “meddling” foreigners — has also forbidden most international non-governmental organizations from working in these areas. The most egregious example occurred in 2008, when the junta initially prevented international aid workers from accessing victims of a devastating cyclone.

The government has been so wary of outsiders that health workers who receive training and supplies from Thailand are treated as criminals, according to Dr. Cynthia Maung, the founder of the Mae Tao Clinic.

Sitting in her clinic’s library, she recalled an incident from two years ago when one of her health workers assisted with a delivery. A government official learned that she had been trained at the border and kicked her out of the community. Mere association with Maung, world-renowned for helping student activists and displaced peoples, is dangerous.

Although Myanmar is rich in natural resources and the elite live well, for most women poverty is a major factor in the maternal health crisis. Poorly educated women lack basic health knowledge, and in nearly a third of the country, they do not have access to free contraceptives, according to UNFPA.

The lack of birth control leads to unwanted and unhealthy pregnancies, and to life-threatening abortions, said Siestra.

Even in central Myanmar, where people are largely shielded from the fighting, women’s health has suffered as a result of the country’s extreme poverty and lack of services. Health care investment has been so low that in rural areas one government midwife has to oversee as many as 40 to 50 villages, according to UNFPA’s Abdel-Ahad.

In South Dagon, a hot and dusty satellite town in outer Yangon, Kyi Sein, 35, sits on the floor of a monastery, waiting to be seen by a volunteer doctor. She leans back and slides her hand under her large belly covered by a bright red top. She is pregnant with her ninth child.

As a line of sweat forms on her upper lip, Kyi Sein says she can’t afford this child. Her husband works as a laborer, earning about 3,000 kyats a day. She earns a little sewing designs on her friends’ clothes. The couple wants to keep their children in school but cannot afford the fees and cost of books, which add up to about 10,000 kyats a year for each child.

“I want my children all to go to school,” Kyi Sein says. “But it is expensive for living costs, food.”

Kyi Sein says she never heard about family planning or spacing out births until she visited this clinic – after already having seven children. She tried to use birth control before this latest pregnancy, but she was too late. She says she will try again.

A time for change

As Myanmar goes through this time of transition, it remains to be seen how a new, reform-minded government will impact the health of the country’s women. While clinicians and advocates in Yangon and on the border say they have not seen tangible changes yet, they are hopeful.

“For us it is unbelievable,” said Dr. Kyaw Hlaing, who has worked in Myanmar since 1990 and with CARE for the past 12 years. “Very surprising for us to see the government change dramatically. But it’s a bit early to say [what the effect will be].”

The government has indicated it will quadruple its health expenditures. The reform process is expected to bring more funding from international donors. The first census will be conducted in three decades, enabling health specialists to identify population needs. And restrictions on access to areas of the country are beginning to be loosened.

At John Hopkins University in April, Health Minister Pe Thet Khin said that the system has been “compromised,” and faces a shortage of providers and educators, inadequate facilities and substandard care for women and children, according to the John Hopkins University Gazette. He said a top priority for the new government will be improving maternal and child services, especially in the rural areas.

The health ministry will focus on hiring more doctors, securing supplies and renovating hospitals, he told Reuters in March.

UNFPA’s Abdel-Ahad said the government’s recent increase in resources to health and education services is a big improvement. But Myanmar has a long way to go, and the money’s “still not enough.”

In the third part of this Special Report, “Beyond Aung San Suu Kyi: Women in the New Myanmar,” GlobalPost’s Hanna Ingber returns to Myanmar, also known as Burma, where she lived for a year under the harsh rule of the military junta, and brings us the stories of women the world has not seen nor celebrated, but who have worked quietly and persistently toward change.