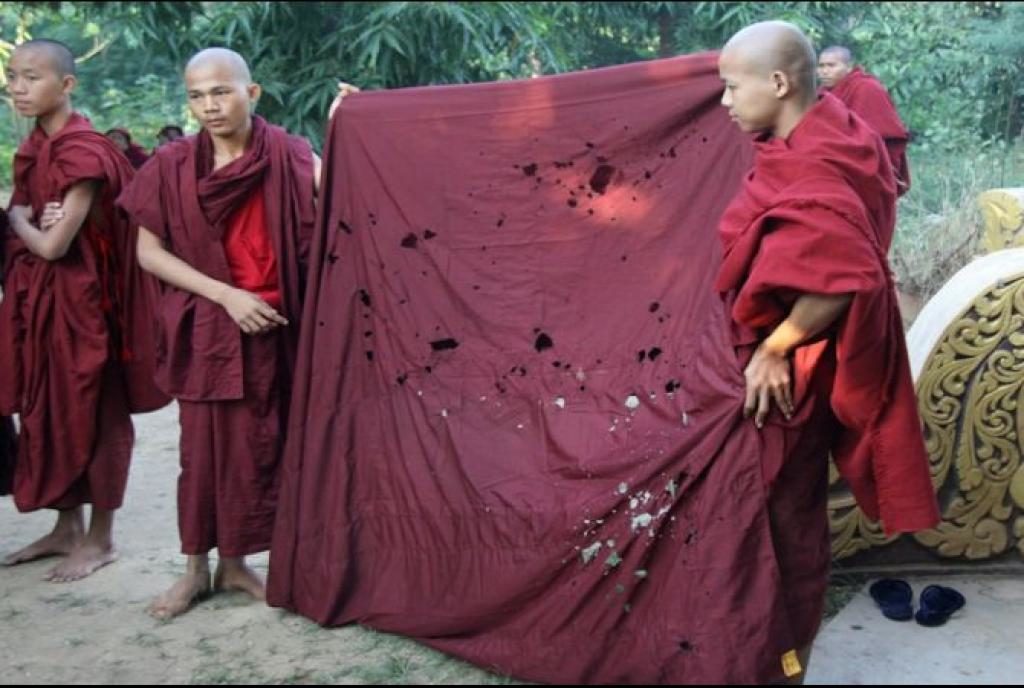 KANKONE, Myanmar — In a cluster of farming villages, in the shadows of a mountain, residents say they are concerned about environmental damage to their lands and a persistent sulfur smell from the strip mining.

A growing protest movement has shut down a Chinese-backed copper mining project, and many say the time has come to fight for local traditions in the face of foreign enterprise.

Although government forces have attempted to use various methods to subdue protesters, including cordoning off the mining compound, none have been particularly successful. Protests continue to pop up in cities across the country, like Yangon and Mandalay, while an around-the-clock sit-in has commenced a few miles from the project area.

For the residents who live near the Chinese-backed mine, there is also worry about what they say is a growing number of birth defects, a concern that is now under investigation by a presidential commission assigned to look into whether or not the project should go forward.

“Water, air, and earth have been polluted by the project. We cannot drink water from our wells. The atmosphere is filled with sulfuric acid smell and we cannot grow crops in our farmland tainted with acid,” said Ko Pauk, a local farmer.

“Now we are trying to stop all of this and we will also save the remaining Letpadaung Mountain too,” he said, referring to one of the ore-rich mountains in a small range of hills that have been demolished by the mining operation.

Residents have watched with great sadness as the mountains have been gouged by heavy bulldozers, only leaving behind mounds of pale-reddish waste soil.

Local anger has been growing against the environmental damage and contamination for years, and a protest movement that began in the fall shows no signs of stopping.

On Nov. 18, villagers and monks from Monwya (as well as Mandalay and Pakokku, where the 2007 monk-led Saffron Revolution started), set up around-the-clock sit-ins at the front gate of the Wanbao Company office and inside the mining project site.

The monks sympathize with the feelings of locals, but they also want to save a religious site located on Letpadaung Mountain, where the country’s most revered Buddhist monk, Ledi Sayadaw, spent his time meditating and writing Buddhist manuals a century ago.

With President Obama’s historic visit to Myanmar, also known as Burma, on Nov. 19, the organizers began to step up their marches, seeing a chance to gain international attention for their cause. They built a protest camp where Buddhist monks held vigils around the clock. Sit-ins forced the entire mining operation to a stop and the protests were tolerated during the American president’s visit.

However, ten days after Obama left, there was a brutal police crackdown on the marches and the protest camp was destroyed, injuring 100 people, including 70 Buddhist monks.

The protests against the copper mines have left the region on edge.

Locals in Monwya, a town about 60 miles northwest of Mandalay, vow to continue their protests against the $1 billion dollar expansion of a copper mining project, a joint venture between the army-owned Union Myanmar Economic Holdings Ltd and Wanbao Company Ltd, a subsidiary of Chinese state-owned Northern Industrial Corps, an arms manufacturer.

The expansion would displace at least 26 villages and destroy 7,000 acres of agricultural land. Villagers complain that they accepted $500 of compensation per acre of land after being convinced by company officials they would never have to give up their plots. The compensation was supposedly to supplement damage to crops that would be affected by the project.

“We are now concerned that our land would be used as the dumping areas for waste soil coming out of the copper processing plant, and that we might never be able to reclaim our land,” said Thwe Thwe Win, a young village woman who organized the protests prior to the crackdown.

She comes from the village of Wet Hmei, which is situated near the project site. The village would be relocated if the expansion plans proceed ahead. To prevent relocation, villagers launched more protests — it was the largest public movement in the country against a Chinese-funded project since the new government was pressured last year to suspend construction of a $3.6 billion hydropower dam financed by Chinese government.

The project is a classic example of China’s attempt to use “soft power” in Myanmar to extract resources that it needs to feed its voracious growth. But these projects, such as mining, hydroelectric dams and several gas pipelines, are suddenly in the spotlight and are being met with increasing resistance among many Burmans.

The protests are also taking place amid concerns that go beyond the environment.

Some women in a village called Kankone cannot get pregnant, and there is a recent rise in children born with defects. No medical evidence has established a connection between the mining and the defects, and the government has said it would report on its investigation of the claims, but residents are concerned that the report will not be fair or independent.

Such grievances against the mining operation and the government stand in sharp contrast with some of the public relations mottos advertised on the billboards at the front gate of the Wanbao Company office near the project site.

There are potentially hundreds of millions of dollars of profit at stake for the Chinese-backed mining company and for the the army generals involved in the enterprise. But for the town residents, a traditional way of life and general health concerns are at risk, and the protesters show no sign of letting up.

At one recent rally, a protest organizer gathered a crowd in front of the Chinese company office and asked the restive crowd, “If Letpadaung Mountain is touched, then what will happen?”

The confrontation reached a climax on Nov. 27 when the government announced a deadline for the removal of the protest camps. But the protesters didn’t care.

Two days later, security forces raided the camps using incendiary devices that caused serious burn injuries to the protesters, most of whom were monks.

“In a few minutes, the fire started. Many monks were asleep and did not have time to flee,” said U Thone, one of the monks who was arrested and beaten that night and released the following morning.

In the aftermath, hundreds of protests led by monks occurred throughout the country, calling for a personal apology from President Thein Sein and to bring all those responsible for the violent crackdown to justice. Protesters also called for the cancellation of the project.

Sein commissioned opposition leader and pro-democracy icon Aung San Suu Kyi to head up a commission on the copper mine and to investigate the allegations of excessive use of force. Suu Kyi has taken on the role, but has cautioned the protest movement about the fragile national reconciliation process the country is undergoing.

Opposition leaders say they are aware that going against Chinese interests in the country is one thing, and confronting the army is another. But for many in the protest movement, the time has come for them to settle grievances they’ve put aside for too long.