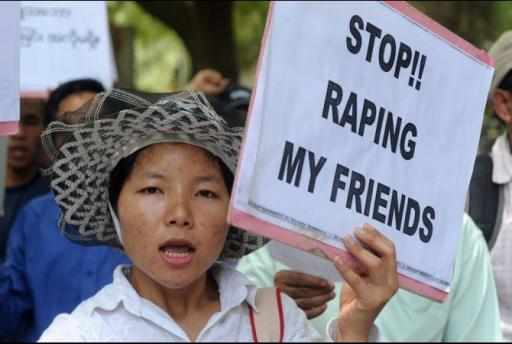 A pro-democracy activist from Kachin State, Myanmar holds a placard as she shouts slogans during a protest against the Myanmar army in New Delhi on June 9, 2012. Some 100 activists demanded an immediate end to the humanitarian crisis in their home state of Kachin which has included widespread allegations of rape and sexual abuse. - (Raveendran / AFP / Getty Images)

YANGON, Myanmar — Last month, Myanmar soldiers entered a village in war-torn Kachin State and found a 48-year-old grandmother taking shelter in a church. Ten troops allegedly beat the woman with rifle butts. They stabbed her, stripped her naked and gang-raped her over three days, according to the rights group Kachin Women’s Association Thailand (KWAT).

In October, KWAT reported the kidnapping and subsequent sexual abuse of a 28-year-old Kachin woman named Sumlut Roi Ja in a nearby township. That same month, according to Human Rights Watch (HRW), soldiers detained 20 Kachin civilians including two women in the state capital Myitkyina.

The captives were taken to a mountaintop where soldiers forced the women to go from tent to tent, sleeping with each officer. The soldiers said things like, “You Kachin women like Burman penises very much, don’t you. All the Kachin women like our penises.”

Rape and sexual abuse among Myanmar’s ethnic women is nothing new. Rights groups say it’s been going on for decades – the terrible tactic of a rogue regime.

But now that Myanmar has emerged from decades of diplomatic isolation, Western sanctions have been lifted and the country stands ready to host an ASEAN conference in 2014, the alleged abuse stands to undermine the country’s progress. In many ways, these ongoing rights violations can be seen as a test for Myanmar’s nascent reforms.

A recent KWAT report found 43 cases of sexual violence and rape by the Myanmar army in Kachin State since a 17-year ceasefire broke down in June 2011. Of those cases, 21 women and girls were killed.

In a new Myanmar (formerly Burma), will these alleged abuses be stopped? Will past perpetrators be punished and forced to acknowledge their crimes? Will the government, still largely comprised of the military, be able to properly investigate military crimes? And does Myanmar need such justice to have true reform and long-lasting peace?

“Without justice – social justice, political justice – without that, we cannot build sustainable peace,” said Nang Raw of Shalom Foundation, an organization in Yangon that works to strengthen ceasefires between the government and ethnic groups.

Activists agree that Myanmar needs justice. Some activists and members of Aung Suu Kyi’s National League for Democracy (NLD) party argue that the abuses must be addressed immediately in order to end a culture of impunity in the army and begin to create a just society. Others argue that the time is not yet right, and that justice must wait for democracy to be institutionalized.

Many activists say the time to act is now. Past wrongs must be addressed in order to have true peace in Myanmar, said David Mathieson, senior Asia researcher for HRW. “Looking backwards helps to bolster the future,” he said, adding that a functioning judicial system needs to be a top priority.

The activists are eager to test the government’s new reforms.

KWAT helped bring the case of Sumlut Roi Ja to the Supreme Court in Naypyidaw, the new capital, accusing soldiers of abducting and sexually abusing her. The court agreed to hear a case filed by the woman’s husband and summoned officials from the regional command that oversees the accused army division to the court.

However, the court swiftly dismissed the case.

Phyu Phyu Thin, a recently elected NLD legislator, wants to move quickly, too. “Military officers who committed such kinds of sexual violations should accept what they have done and should be punished,” she said.

Of course, this is no easy task. Myanmar has been fighting with ethnic groups since it gained independence from the British in 1948, and many say the abuse stretches back nearly as far. An end to the fighting has been one of the prerequisites for the West’s reengagement with Myanmar. But despite peace talks, the fighting continues. Since June, as many as 75,000 people have been displaced near the Chinese border.

And the constitution, as it stands, shields the military from prosecution. An amendment to change the law will be difficult given how many past and present military officials currently hold government positions.

Thus, some activists say now is not the right time to act. Moving too fast to address rights violations could cause the government to backtrack.

Nang Raw of the Shalom Foundation says people must be patient and take another kind of lesson from the past.

When Suu Kyi and others in her party won the vote in 1990, the NLD quickly started talking about holding the military accountable for its brutal 1988 crackdown. But before they could make good on their promises, the ruling junta refused to transfer power.

“This time, people are very, very careful,” Nang Raw said. We need justice, she said, but “how and when we settle these things, it should be very timely. We cannot be very loud right now.”

Even Suu Kyi herself isn’t advocating aggressive action. “At this moment what I want most is reconciliation and not retribution,” she said on her recent trip to Europe, as reported by The New York Times.

The new government set up a National Human Rights Commission late last year. But the commission said in February that it did not think the time was right to investigate reports of abuse in ethnic regions.

“The national reconciliation process is political,” chairman of the National Human Rights Commission Win Mra said at a press conference in Thailand. “To investigate into conflict areas would not be appropriate at this time.”

Previously, the official party line of the former Myanmar junta was to deny all allegations of human rights violations. Often, they accused ethnic rebel armies, like the Kachin Independence Army (KIA), of committing their own atrocities.

In 2002, Shan Women’s Action Network (SWAN) released a report, “License to Rape,” that detailed 173 incidents of rape and sexual violence committed by the Myanmar army in Shan State between 1996 and 2001. The report attracted international attention, and the junta investigated. Their team wrote their own report, denying the allegations: “License to Lie.”

HRW took issue with the methodology used by the junta’s fact-finders, who reportedly went to villages and essentially asked rape victims to raise their hands, according to Mathieson.

HRW says it does not have evidence that the army orders soldiers to rape ethnic women, but attributes the widespread violence to impunity among troops. HRW has also documented abuses committed by the KIA, supporting some of the junta’s claims.

Given recent reforms, many international observers appear willing to wait and see whether the situation improves.

The United Nations human rights expert for Myanmar, Tomas Ojea Quintana, recently told the Democratic Voice of Burma that a UN-led Commission of Inquiry into the ethnic violence was no longer politically feasible. What is needed instead, he said, is “the initiation of a process of justice and accountability” within the country

During US Secretary of State Hillary Clinton’s visit to Myanmar last February, she too stepped back from a previous call for a UN war-crimes probe into abuses.

“We are going to support the principle of accountability, and the appropriate mechanism to ensure justice and accountability will be considered,” she said, according to AFP. “But I think it’s important to try to give the new government and the opposition a chance to try to demonstrate they have their own approach toward achieving that.”

In the meantime, there are those working quietly to document crimes so that when the time is right, they are ready.

Ah Hkawn, a young Kachin woman, spent half of last year investigating physical and sexual abuses by the Myanmar army against her people. She and an American researcher hiked for days through the mountains near the Chinese border. They lugged water and instant noodles through the nonstop rain to reach distant villages where people had been affected by violence.

Ah Hkawn, whose straight black bob frames her round face, says the reforms give her hope but that, as long as violence continues, she must look out for her people.

Activists still fear retaliation and must be careful, she said. They only bring forward cases of victims who live in territory controlled by the ethnic rebels or are already dead.

In the second part of this Special Report, “Beyond Aung San Suu Kyi: Women in the New Myanmar,” GlobalPost’s Hanna Ingber returns to Myanmar, also known as Burma, where she lived for a year under the harsh rule of the military junta, and brings us the stories of women the world has not seen nor celebrated, but who have worked quietly and persistently toward change.