Myanmar: A power play on the Irrawaddy River 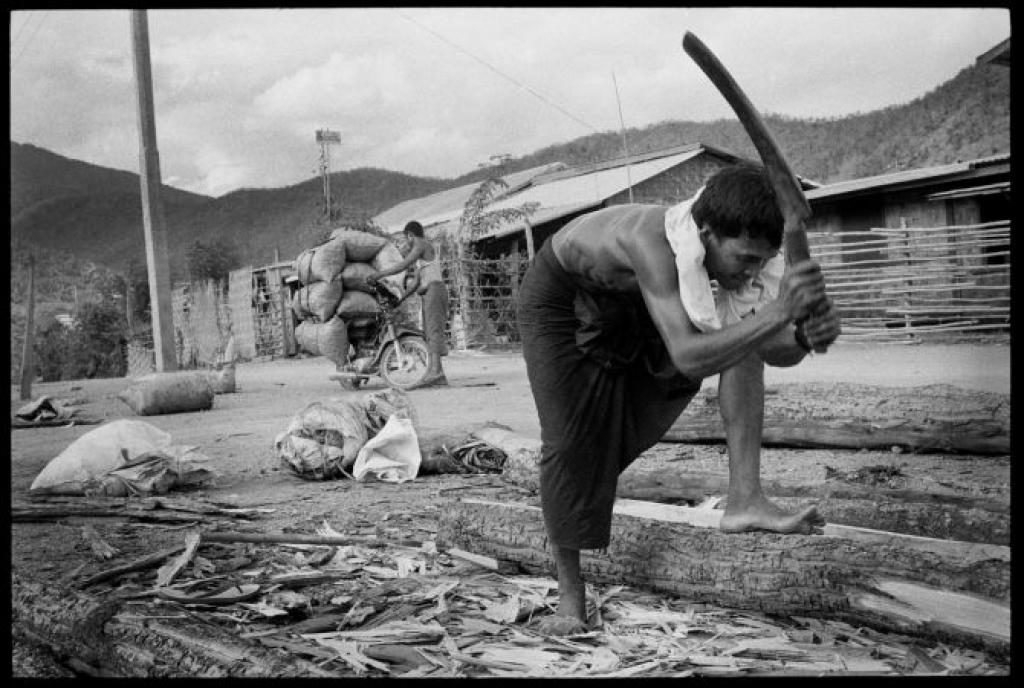 Villagers displaced by the Yeywa Dam scratch out a living in a new community. The village has no water supply nearby so villagers have to take an ox cart to the Myitnge River a mile away. There is no irrigation, no shade and many familes from this ancient community refused to settle here, destroying a community that is hundreds of years old. The government installed electric pylons but the villagers are unable to afford the subscription fee. ( - (Gary Knight/VII/The GroundTruth Project)

YEYWADDY, Myanmar — The villages along the Myitnge River have been inhabited since medieval kings first located their royal palace in Ava, where the Myitnge flows into the Irrawaddy, the flowing soul of Burma, or as some scholars translate it, “the river that brings blessings to the people.”

But there is nothing ancient about Yeywaddy, a small settlement that possesses all the charm and character of a refugee camp, which in some ways is what it is. Red dirt lanes meet at square angles. Woven bamboo shacks and small gardens of straggly vegetables occupy some plots. Others are simply marked in string and cinderblock. The village looks half-abandoned.

The people of Yeywaddy are, more properly speaking, the people of Pein, a village once located along the banks of the Myitnge some ten kilometers upriver. Two years ago the residents of Pein were forced out of their ancestral village to make way for the Yeywa Dam, which went into operation in 2010. Their village — along with the Sappa Sukha Htattaw, a 1000-year-old Buddhist temple — now lies submerged. The largest hydroelectric project in Burma, the dam produces some 790 megawatts of electricity, most of which passes just over the heads of the people in Yeywaddy Village, on its way to Mandalay, and then to China.

The new village is difficult to irrigate, the soil sandy and unproductive. Every day the village boys take a cart drawn by two oxen down the rocky path to the river, and fill giant oil barrels with water. This will be used for both domestic and agricultural use. Pein’s traditional sources of income — logging, fishing, and farming — have all become far more difficult here.

To add insult to injury, when the residents of the new village asked to be hooked up to the electricity that now flows from the dam site down to Mandalay, they were told it would cost $100 per household just to install each meter. The villagers laugh darkly at this story.

“That’s about three months’ income for us,” one says.

“The old village had 177 households,” says a thin, cautious man wearing the traditional Burmese longyi, a colorful, ankle-length cloth bound around the waist. As we speak a uniformed Burmese soldier stops outside the courtyard where we are standing. He eyes us suspiciously, but moves on. More villagers gather around us, but when asked their names they stare at the ground nervously and remain silent.

“So the government set up 177 plots of land in this place,” adds the thin man.

Not everyone in Pein followed orders, however. Many of Pein’s residents simply drifted away. And because the military junta that rules Burma didn’t classify Pein as a village, no one received compensation for their land. Neither were they offered jobs at the dam site, they say.

“There are 75 households here,” says the man.

The crowd gathered around breaks into nervous snickers. A translator explains that the villagers believe that even this figure has been inflated by the government.

While the Burmese government does not release figures on how the hydroelectricity is distributed, the junta has touted the dams as part of a larger strategy to electrify the nation.

But analysts like Elizabeth Economy with the Council on Foreign Relations have a hard time believing it isn’t bound for China’s Yunnan Province. As with some 43 other hydropower projects in Burma — all of them built within the last twenty years, following the thawing of relations between Burma and its giant neighbor to the east — China delivers the expertise, the equipment, and in the case of Yeywa, the lion’s share of the $600 million USD it required to build the dam.

In exchange China receives an exclusive license to operate the dams for 50 years before the works are handed over to Burma, and much of the electricity, says Grace Mang, the China program director at International Rivers, an NGO that studies the impacts of dams on the environment and local communities.

“It’s almost inconceivable [China] wouldn’t get some of that electricity. That’s how these projects operate,” says David Steinberg, a distinguished professor of Asian Studies at Georgetown University, and a widely recognized expert on Burmese-Chinese relations.

The village of Pein is an example of how Chinese-funded infrastructure projects have long operated in Myanmar. The people get nothing — not even the power generated by the projects — but lose their land, their livelihoods and in the case of Yeywa, an ancient religious site to boot.

The general template, Steinberg says, is that the Chinese offer to build the dam, but in exchange they get to operate it for 50 years. Some 90 percent of the electricity generated by the these dams are destined to state-owned enterprises in Yunnan Province, which then sells the electricity to the booming metropolises along China’s Pacific seaboard.

This helps explain why much of Burma remains dark, and why so much internal resentment has begun to build up against the Chinese. Hard figures are hard to come by, but a visitor to Burma can recognize the tell-tale click of the electrical grid shutting down and a nearby generator kicking into gear. Blackouts are common in Yangon, Mandalay and other urban centers. Meanwhile, rural Burma remains without any power at all, giving rise to a cottage industry in solar panels used to charge cell phones and computers.

So far as Burmese hydropower projects go, it appears the villagers of Pein got off light. The villagers we spoke with insisted that no physical violence ever accompanied the forced relocation of the village. According to human rights groups, this stands in stark contrast to projects within those states dominated by ethnic minorities such as the Kachin, the Shan, or the Karen peoples.

“The military usually accompanies the Chinese as soon as they go in to do feasibility studies,” says Mang. In the past, locals have often been conscripted into hard, unpaid labor, and their villages uprooted without either compensation or, as in the case of Pein, the provision of an alternative site.

There is anecdotal evidence that this may have changed as Burmese president Thein Sein began orchestrating a rapid turn toward the West after his 2011 appointment by Senior General Than Shwe, who ruled the country for 19 years.

Last September 30, Sein surprised foreign observers, his own people and the Chinese themselves by suspending work on the Myitsone Dam.

Sein cited both environmental and economic concerns (the dam would have flooded private rubber and teak plantations), but his act was widely viewed as a concession to the widespread, and unusually vocal outrage that a broad swath of Burmese expressed at the prospect of a dam located at the headwaters of the nation’s most sacred river. If completed, the dam would be the 15th largest dam in the world, rivaling the Three Gorges Dam on the Yangtze River.

The dam was being constructed by the China Power Investment Corporation (CPIC )— a state-owned behemoth that supplies 10 percent of China’s electricity. David Steinberg, a professor at Georgetown University and longtime Burma scholar, describes how local Burmese viewed the project.

“[CPIC] brought in foreign labor. So the Burmese don’t get jobs. They don’t get electricity. They get their land confiscated, and they may or may not get money for that.” According to Environmental Investigation Agency, an activist group that surreptitiously sends observers to sites like Myitsone, CPIC was even trucking dirt from its excavations back to China.

Yet by all accounts China did not anticipate the extent of Burmese opposition to the project. According to International Rivers’ Mang, this was CPIC’s first project outside China.

“Dealing with environmental protection, compensation, community relations — all those tricky issues are dealt with by the provincial government when you’re building a dam inside China,” says Mang.

Diplomatic cables from the US Embassy written in 2011 say the dam is a “joint collaboration” between CPIC and Asia World, one of Burma’s largest conglomerates. Asia World is owned by Lo Hsing Han and his son-in-law Stephen Law. According to the US Treasury Department, which in 2010 announced economic sanctions against Han, Law, Asia World, and all its subsidiaries, Han “has been one of the world’s key heroin traffickers dating back to the early 1970s.”

Both Han and Law are on the US “specially designated nationals” list barring them from traveling to America.

Located within the Kachin State in the northern mountains of Burma, the dam would flood 47 villages and cause massive deforestation. But worst of all the Myitsone Dam was located at the confluence of Mali River and the N’Mai River, regarded by the Kachin as the sacred site where the Irrawaddy, or Ayeyarwaddy, is born. Earlier this year, Burma ordered China to remove its construction equipment — and the reported 20,000 workers still based in Barracks in the Kachin State — to return to China.

Mang and other analysts interviewed for this article agreed that the Chinese behind Myitsone had a tin ear, ignoring anti-Chinese rumblings for years until it was too late. Instead they walked into a perfect storm, in which Sein was able to score a major international and domestic coup by putting a stop to a widely unpopular project that would, after all, have offered little benefit to the people he might increasingly call a constituent.

But that doesn’t mean that CPIC will give up easily.

“All my sources inside China say that it’s inevitable, that all the early work has already been done,” says Mang. “But my Burmese partners say, ‘No way.’ They won’t ever accept a dam on the confluence of the Irrawaddy.”

All of China’s projects must now be viewed through the lens of Myitsone Dam. But Chinese companies have been quick to adapt their approach in the pursuit of their strategic interests in Burma.