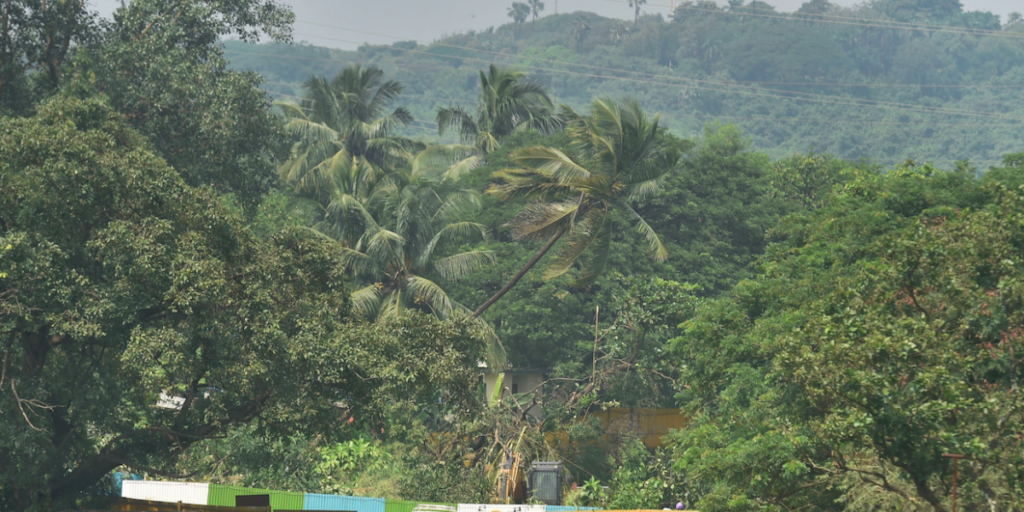 Workers cut-down trees for the Metro car shed project in the Aarey colony of Mumbai. (Photo by: PTI/Files)

Kochi: Reversing the previous Uddhav Thackeray government’s decision, Maharashtra’s new deputy chief minister Devendra Fadnavis announced that the Mumbai Metro’s controversial car shed will be moved back to Aarey forest. Concerned Mumbaikars are once again up in arms against the decision, vowing to hit the streets and do whatever it takes to force the new Eknath Shinde government to reconsider its decision.

Significantly, it is one of the first decisions taken by the Council of Ministers headed by the Eknath Shinde government, which assumed office on Thursday, June 30.

Aarey is a forested patch in the city and a catchment area of the Mithi river that flows through the city of Mumbai. Ecologists called the decision of the new government “egoistic” and “petty”. Citizens’ collectives and activists who had resisted the shed being constructed in Aarey in 2019 vowed to restart agitations and also contest the government’s decision in court, they told The Wire.

On Friday, July 1, Thackeray also appealed to the new government to not “toy with the environment” by relocating the metro car shed to Aarey. Fadnavis, in response, said that a decision by the state government would be taken “respecting” Uddhav Thackeray and in the “best interest of Mumbaikars”.

The plan to construct a metro car shed in the Aarey forest has been on the cards for almost a decade. Aarey is a forested patch in the city and was once connected to the adjoining Sanjay Gandhi National Park, said wildlife biologist Anand Pendharkar, chief executive officer of Sprouts, an organisation that focuses on wildlife conservation and awareness. Some parts of Aarey were declared an ecosensitive zone of the Park in 2016.

Things escalated in October 2019 when the Mumbai Metro Rail Corporation Limited (MMRCL), under the then Fadnavis-led government, cut down more than 2,000 trees in the area for constructing the car shed. Citizens took to the streets to protest against the move. They also filed petitions in the Bombay high court and in the Supreme Court to contest the move to build the metro shed in Aarey.

In 2020, following widespread protests in Mumbai, the Thackeray government decided to move the station from Aarey to the predominantly marshy, salt pan area of Kanjurmarg, also within the city premises.

Apart from relocating the shed, the Thackeray government also announced that they would declare around 800 acres of Aarey as a reserved forest. They also withdrew cases filed against protesters during the course of the ‘Save Aarey Campaign’. These decisions were “a historic step towards making climate change mitigation and adaptation a part of our daily decision-making process”, former state environment minister Aaditya Thackeray wrote in Hindustan Times.

The move by the new government to shift the metro car shed to Aarey again is problematic not just because of the trees in the forest that will be logged for construction. The region is the catchment area of the Mithi river, said Amrita Bhattacharjee of the Aarey Conservation Group, a collective of citizens that came together to resist the project in Aarey. Bhattacharjee is also one of the petitioners who approached the Supreme Court to move the metro car shed from Aarey.

“Aarey has grasslands and shrub vegetation too from which streams arise,” she said. “You cannot build drains and channelise this water into the sea, it just won’t work.”

Aarey as a reserved forest?

Moreover, there are 27 tribal hamlets in Aarey and people living here will face displacement if more development occurs in the area, she added. Some families have already been displaced.

Ecologists find the lack of a government regulation to finalise the status of the forest oddly out of place.

“I don’t believe any politician due to their consistent failure to protect the environment…the Thackeray government got many community reserves declared, did a fantastic job with sea turtle monitoring and Covid-19 management in Mumbai,” said Pendharkar. “Then why couldn’t they pass a clear government regulation finalising the status and boundaries of the 800 acres of reserved forest?”

Aarey is also home to around 1,100 species of flora and fauna as per their surveys, said Pendharkar. The location identified for the metro car shed is a breeding site for the Indian rock python – a species protected under Schedule I of the Wildlife Protection Act, 1972 – he added. Leopards – another Schedule I species – are also known to use the area. The decision to move the metro shed back to Aarey is an “egoistic” and “very petty” one, Pendharkar added.

“The citizens’ collective will start the agitation again and if needed go to court again to protect Aarey and every natural ecosystem,” he said.

Citizens groups, including the Aarey Conservation Group, are also gearing up to put up a fight, Bhattacharjee said.

“We will contest this in the Supreme Court. People will take to the streets to voice their concerns. The current chief minister Eknath Shinde had himself said at that time that Aarey should be saved. We want him to remember his own words.”

‘Don’t toy with the environment’

On July 1, however, Fadnavis said that the state government would take a decision on the Mumbai Metro Line-3 car shed “keeping Uddhav Thackeray’s respect and best interest of Mumbaikars in mind”.

“We will take an appropriate decision. Will take a decision keeping Uddhav Thackeray’s respect and best interest of Mumbaikars in mind,” ANI quoted him as saying.

This was in response to Uddhav Thackeray’s appeal to the new government to not shift the metro shed back into Aarey forest, in his address to the press at the Shiv Sena Bhawan in Mumbai on Friday, July 1.

“Attack me, but don’t attack Mumbai. Don’t project anger for me on Mumbaikars. Don’t change the proposal for the metro shed and Aarey rule. Don’t toy with the environment of Mumbai,” Thackeray was quoted as saying.

The decision to relocate the metro car shed to Aarey raises concerns about the speeding up of several other developmental projects that could cause environmental fallouts too, Pendharkar agreed.

The bullet train project, which was stalled due to problems surrounding land acquisition and environmental impacts, is likely to be expedited too. The project aims to connect Ahmedabad and Mumbai and envisages reducing travel time between the two cities.

Environmentalists have raised concerns about the destruction of the fragile mangrove ecosystem in the Mumbai-Thane regions that the bullet train would pass through. Experts have also noted that the project could cause an increase in urbanisation and social conflicts.