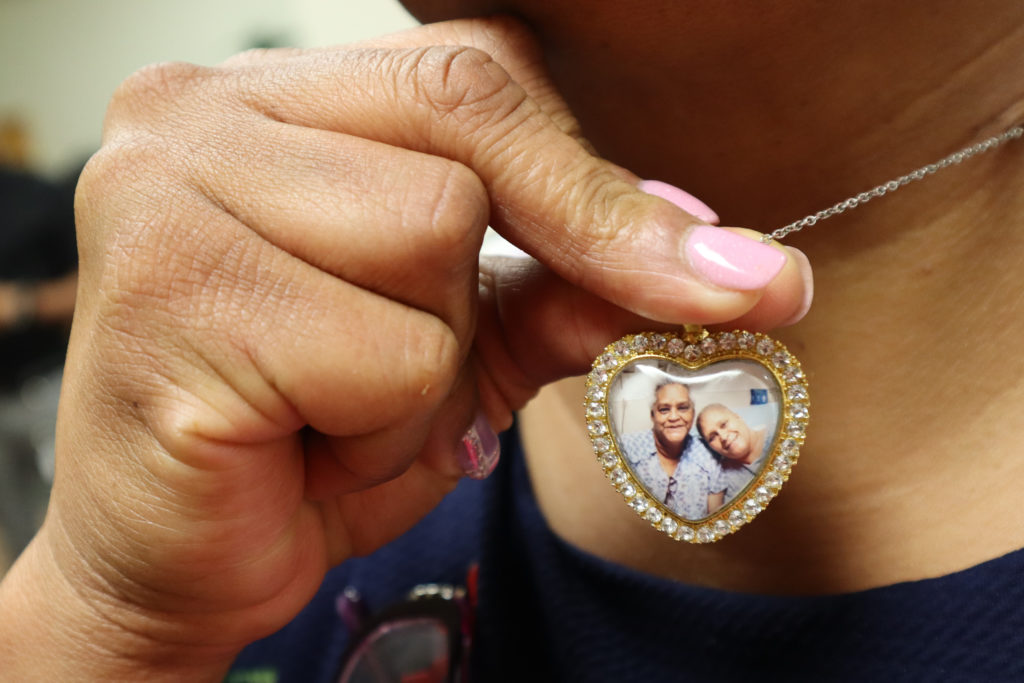 Monique J Washington holds up a pendant framing a photo of herself during cancer treatment, leaning against her mother's shoulder. (Photo by Isaiah Murtaugh/GroundTruth)

HOUMA, La. – Monique J. Washington keeps her hair braided in tight rows, close to her head. It has grown back in the year and a half since the chemo ended. Around her neck, she carries a small photo in a rhinestone-studded, heart-shaped frame.

In it, a grey hospital gown rests in loose folds around her neck. Her eyebrows are gone, and so is her hair. She smiles for the camera – weary, but content – and rests her head on the shoulder of a woman who could be mistaken for Monique’s twin. But a crown of white hair gives her age away; that she is Monique’s mother, Joyce Marie Pierce Johnson. Or Mama Joyce, as she was known.

When Monique was diagnosed with breast cancer in 2019, Mama Joyce became her caretaker. Cancer, chemotherapy and surgery had weakened Monique to the point that she couldn’t even get to the bathroom, but 72-year-old Joyce became her legs, lifting and carrying her to the toilet.

It was Monique who the Johnson family feared would not make it. In April, after the coronavirus pandemic had prevented them from gathering for so many months, a memorial brought them together again at Corinthian Baptist Church in Houma, Louisiana.

Joyce died a year ago far from home – in a hospital bed in Hemet, California. COVID-19 had sapped the strength from her lungs. She is among the more than 600,000 people killed by the virus in the United States.

America was in strict lockdown in April 2020 and Joyce’s family was forced to put her funeral on hold. Their mourning interrupted, Joyce’s loved ones were left to grieve by themselves, without the comfort of ceremony and the rituals that help people process tragedy.

They took comfort in remembering the last time they had gathered for Thanksgiving at Monique’s home in Atlanta.

Mama Joyce’s yearly calendar revolved around feasts. Mardi Gras was the other big one – a four-day affair stretching from Fat Tuesday through Friday.

She started prepping for Thanksgiving in August, dicing and freezing onions, celery and bell peppers, the “holy trinity” of Cajun cooking. When the big day finally arrived, she was a hurricane in the kitchen, chopping, basting, simmering and baking. She prepared nearly every dish on the table. The air hung heavy with heady aromas – steaming stuffed bell peppers, alchemical Cajun dirty rice, a turkey fried in the backyard by a son-in-law. Monique handled the pies every year, though not at this last gathering. By then, she was too sick.

Still, the feast had to be perfect. Mama Joyce baked the pies.

Joyce lived much of her life in Houma, where her mother was a regular at Corinthian Baptist and her grandparents were buried in a nearby cemetery. She followed Monique to Atlanta in 1989 to help with the kids, but moved back to Houma 20 years later, to the house in which she grew up: Her mother was sick and needed care. Joyce took a job at a local grocery store, and Monique says she was the warm, friendly cashier for whom customers would switch lines.

Houma, the largest city in Terrebonne Parish, began as a French colonial hub at the juncture of six bayous, and on the site of a former village of the Houma indigenous people. The parish is deep in Cajun country; roadside signs advertise homemade crawfish pies and a local fish shack sells taxidermied alligator heads. The names of parish council members – Trosclair, Domangue and Guidry – are steeped in local history. The Johnson family, per Monique’s research, has been here since the end of the Civil War.

In 2009, Joyce was visiting Monique in Atlanta when the health of Joyce’s mother took a turn for the worse. She died in the guest bathroom, cradled in Joyce’s arms. It was the first time Monique had ever seen her mother cry.

Joyce retired in 2019 and started spending as much time as she could with her children, helping youngest daughter Kristie buy her first home, making sure Tricia was rooted back in Houma and that Frank Jr. was settled with his new wife. And she was there by Monique’s side after Monique’s double mastectomy.

It was on a March visit to her son Terry in California, that she contracted COVID-19. It was still the early days of the pandemic, when little was known about the novel coronavirus and the country had just begun shutting down. After a hospital visit and a COVID test, doctors asked Joyce to come in for a stay. Terry dropped her off at the hospital curb.

Even in a hospital bed, Joyce was sure she would make it home. In early April, she spoke with Kristie on the phone.

Joyce believed she would be going home even though she had already been in the hospital a week and a half, getting weaker by the day.

She spoke with her oldest, Monique, over the phone even as doctors prepared to intubate her.

That phrase was magic, one she had used in critical moments before. When hurricanes ripped through Louisiana and when at a nightclub, she took an accidental bullet to the stomach.

This was a woman who willed the world into alright-ness, tinted with equal doses of joy and pragmatism. The truth was sometimes ugly, but sometimes sweet. Joyce knew life was hard, but she also knew it was worth living.

So, she told her kids it would be alright.

The ventilator could not save Joyce; she died on April 15, 2020. But she would not make it home to Houma for another whole year.

It wasn’t until this past April 15 that Terry Johnson stepped off an airplane in Houma carrying an urn containing his mother’s ashes.

As in life, it was Mama Joyce that brought the family together; it was the first family gathering since that final Thanksgiving.

They filed into Corinthian Baptist Church, each dressed in Mama Joyce’s favorite color, purple.  They were a bouquet of violets composed of five children, two stepchildren, 31 grandchildren and 17 great grandchildren. They had road-tripped from Atlanta, flown from California, driven from up the street.

The urn sat on a table in front of the pastor’s pulpit, framed by a spray of purple flowers. The pastor preached of heaven and finding God while one still lives, the way preachers do when they hope death will prompt people to reevaluate their lives.

In the front pew, 11-year-old Layla rested her head against her mother Kristie’s chest. Her eyes closed, but tears traced down each cheek. She was 10 when she was with her grandmother on the trip to California, when Joyce went on her last trip to the hospital. Joyce had made sure to tell her granddaughter it would be alright. Now at the funeral, Layla, exhausted from tears, fell asleep .

Monique read aloud the eulogy she had been working on for months, and family members came up one at a time to say their peace. She had held it together for so long, but when her aunt began speaking, she crumpled in her pew, sobbing.

A few months later, back at home in Atlanta, Monique caught a glimpse of a red robin flitting through her neighborhood. She knew a robin represented the spirit of a lost loved one, a “silent word from above.”

Maybe Mama Joyce was prophetic, after all. Maybe, it really would be alright.

Isaiah Murtagh is a Poynter-Koch Media and Journalism Fellows with The GroundTruth Project. Follow him on Twitter: @isaiahmurtaugh