How ‘moral injury’ takes a toll on journalists 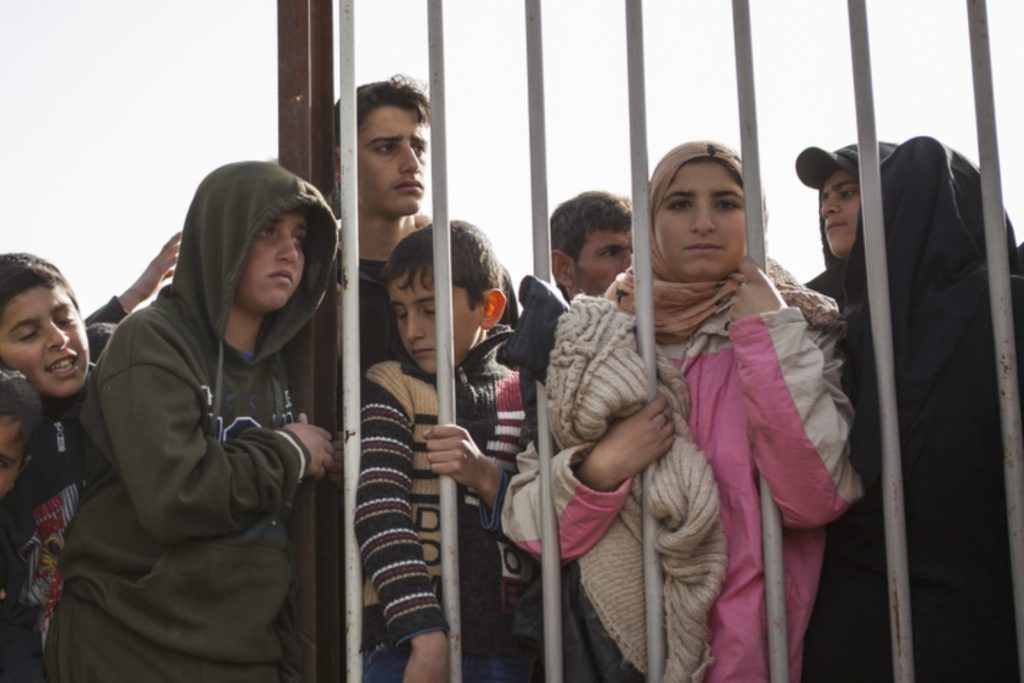 Children peer through the fence during distribution hours in Zaatari refugee camp on January 18, 2016. (Christopher Lee/GroundTruth)

For the last eight years, I’ve been based in Cairo and Istanbul, covering the Middle East, a bit of Africa, and sometimes even Latin America. Two months ago, I made a difficult decision. I decided to move back to America to report on an incredibly divisive — and for me, downright frightening — time in my country’s history.

Throughout my career, people have often called me a “conflict reporter.” And I’ve always bristled. Like a weird old blazer from an uncle’s closet, the term just didn’t quite fit. Whether in Afghanistan or El Salvador or Chicago, conflict wasn’t what I was interested in reporting on. I was interested in reporting on life. To that end, I was never on the “front lines.” I always found the periphery more telling. Even at the beginning of the Syrian civil war, when I was one of the few foreign correspondents on the ground, I was mostly in kitchens, living rooms, and candy shops. If anything, I was a “resilience” reporter, not a conflict reporter.

But. I’ve some seen stuff. And more than seen, I’ve heard. I’ve heard a lot of trauma over the years. Syrian women whose husbands and children and grandchildren were murdered in broad daylight while playing soccer in front of their home; Salvadoran women who were locked away for life for having miscarriages that their governments ruled were abortions.

Over the years, the toll of being a messenger of trauma impacted me, but I never wanted to admit it. A man violently grabbed my breasts in Tahrir Square the night Egyptian president Hosni Mubarak fell. As I’ve written before, I never wanted to make a big deal of it. As the Arab Spring soon devolved into counter-revolutions and violent civil discord, I often went through periods in which I lost my appetite or felt an immense sense of guilt for enjoying life in Istanbul after arriving back from harrowing trips to Iraq where Yazidi boys and men told me about their mothers and sisters who were still under ISIS captivity; how they still sometimes hear their screams in their nightmares.

After a particularly difficult summer of following Syrian contacts who were taking the migrant trail from Turkey to Europe via boat and train, I decided to take a break. I was on a vacation in the Mediterranean and couldn’t stop thinking about the all the families shoring up on the beaches with their dreams, many alive but some dead. I felt awful for taking a reprieve. I couldn’t stop the news and I couldn’t stop my own impulse from wanting to provide a first draft of history. My then partner encouraged me to see a therapist. I refused for months.

Whenever I would talk to my friends who were going on with their lives in the States, I grew more sad, if not angry. I didn’t want to fault them for their perceived ignorance or engage in a useless game of Oppression Olympics. We’re all fighting our own intensely individual battles. But crap, why didn’t anyone know about the brutalities and absurdities that were going on in Syria? In Iraq? In Brazil? In Saudi Arabia? Why couldn’t I raise enough money to send 13-year-old Ruby, a Syrian refugee, to school? And why don’t my stories amount to anything more than — if I’m “lucky” — a flurry of tweets?

At my first therapy session, 29 and furious at myself for not being able to “get my shit together,” I cried. “But I’m not forced to support my family like Ibtisam does. My mom and little brother didn’t die by a mortar shell like Mostafa’s did,” I told my Turkish therapist. The trauma they experienced could never be equated with my own — simply a byproduct of having the distinct privilege to hear and tell their stories. And still.

I couldn’t step away from a constant pang of guilt, of what psychiatrist Anthony Feinstein and  journalist Hannah Storm identified in their July 2017 Reuters Institute report as “moral injury.” That is, “the injury done to a person’s conscience or moral compass by perpetuating, witnessing or failing to prevent acts that transgress personal moral and ethical values or codes of act.”

While the concept itself is not new, Syracuse University’s Moral Injury Project explains, “throughout history, philosophers, poets and warriors themselves have long wrestled with the ethical dilemmas inherent in war — the term “moral injury” is more recent, and is thought to have originated in the writings of Vietnam War veteran and peace activist Camillo ‘Mac’ Bica.”

Moral injury is increasingly a topic of research across many disciplines, and a focus of dissertations and conversations. But it’s not as well understood or researched as Post-Traumatic Stress Disorder (PTSD) which is a specific mental health diagnosis. Still, the anguish, anger and alienation are often there.

When I read Storm and Feinstein’s report, I nodded in recognition until my head hurt. I messaged so many of my dear friends and colleagues and mentors who had covered humanitarian crises all over the world for years. And not just “conflict” reporters abroad. In fact, those who are currently reporting on the United States’ southern border expressed the same. So too do many of my non-journalist friends who are simply reading the news during this moment in history.

Here’s a Q&A I did with Hannah Storm for Navigator, GroundTruth’s newsletter for early-career journalists. Storm is also director of the International News Safety Institute (INSI):

This interview was edited for length and clarity.

LB: For your study, you focused on the emotional toll of the refugee crisis on the journalists covering it. What did you find?

HS: It’s important to acknowledge that what the refugees endured in terms of trauma far transcends what journalists as a group experienced. However, although those who covered this story did not experience significant amounts of physical risk themselves, we did find that many journalists were deeply affected by their experiences, but not always in the same way.

This study is the first of its kind to show how journalists can be affected by moral injury, linked as it is to guilt and a sense of having lost one’s moral compass. Moral injury, rather than PTSD, emerged as the biggest psychological challenge confronting journalists covering the refugee crisis. It’s important to note that moral injury is not a mental illness, but if left untreated it can severely impact people’s ability to do their job.

LB: The report says that “moral injury is strongly associated with journalists becoming actively involved in helping refugees.” How do you prevent that blurring of lines?

HS: It’s really important that journalists know what their professional role is and they try to establish parameters beforehand to help them determine where and when the lines should be drawn and so they are less likely to blur.

Journalists aren’t humanitarian workers, they are contemporary historians. That’s not to say there won’t be instances where they are called on to help and, as human beings, their first impulse shouldn’t be questioned. But if they find themselves repeatedly and unnecessarily repeating such actions, it leaves them more vulnerable to moral injury. Of course, we’re not suggesting journalists are dispassionate bystanders, but their passion and commitment should be channeled into their work primarily, without robbing them of their humanity.

As we say in the study, good journalists will of course feel moved by the migration crisis, but they cannot fix it and should not attempt to do so. Guilt and moral injury can be faulty motivators of behavior.

LB: What should we do with this information now that we have it?

HS: It’s really important that more work is done to alert journalists to this condition and to support those whose work means they cover stories which are stressful and emotionally distressing. If you look at the factors associated with moral injury, we found that those who were parents, local journalists and those who worked alone or with a greater workload than previously, were more likely to experience moral injury.

It is plausible that they may be affected by moral injury in other stories in non-conflict areas that deal with stressful or emotionally distressing situations and put journalists in situations where lines potentially blur between becoming actively involved and covering the story. However, the only way of proving this is through more research.

LB: When I was started out in my career, I didn’t want to admit distress or stress. I didn’t want to be perceived as weak or “emotional” because I was afraid it would affect future opportunities. You call for a cultural shift within the industry. What would this look like?

HS: Our industry is not very good at giving ourselves permission to admit vulnerability. Part of this is because culturally it is still very macho and predominantly male at its most senior levels.

It’s also because, unfortunately, there are still limited support structures in place for those who experience stress and mental health concerns and these are still taboo in many areas. We need to work much harder in breaking down those taboos and ensuring people feel safe to talk about their concerns. To this end, it’s really important that leaders are able to lead from the top and create spaces where people feel they have relationships of trust, be that through peer to peer networks, employee assistance programs or other facilities.

It’s also been immensely helpful in some newsrooms to have more experienced journalists talk openly about the issues they have faced, though it’s also important to note that those who feel more vulnerable may still not feel able to come forward even in these instances, if they are worried about the potential knock on effect on their career.