Modi strengthens his grip on power 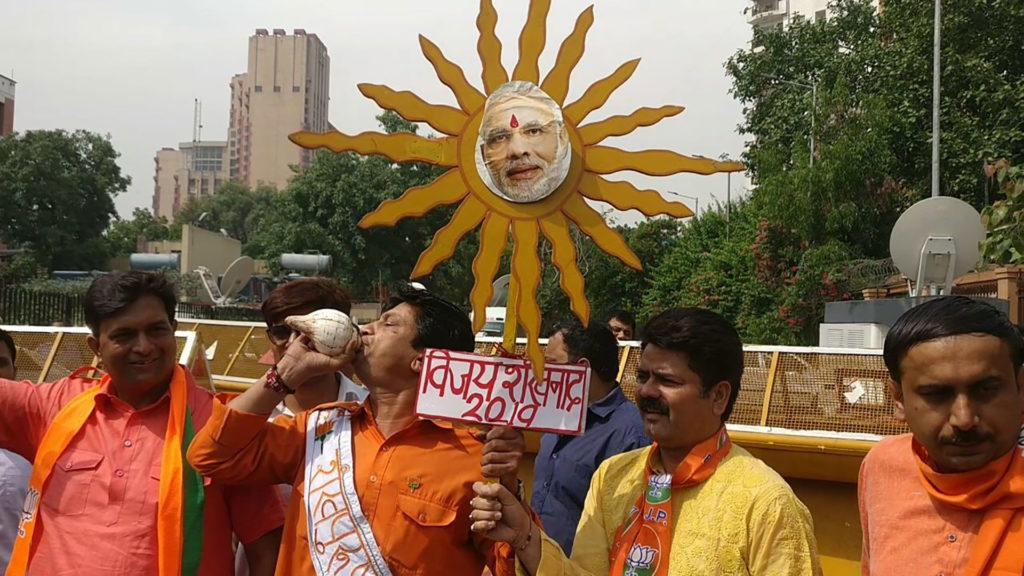 The BJP won 303 seats in the Lok Sabha, the lower house of parliament, 21 more than in 2014. In contrast, India’s other major party, the Indian National Congress only won 52 seats. BJP’s victory puts them well beyond the 272 needed for majority, consolidating their power and support for their nationalist policies.

Modi’s work with the Rashtriya Swayamsevak Sangh, a right-wing, Hindu nationalist volunteer organization, in his early days has helped him create a persona that appeals to the majority Hindu population of India. But religious minorities have expressed concern that Hindutva has created an increasingly hostile environment for them.

Since Modi and the BJP took power in 2014, there has been a rise in cases of violence against minority communities, like Muslims and Dalits — an oppressed caste of Hindus. Although the trend has been reported and criticized, Modi has only commented on in sparingly and only after protests broke out across the country.

At the same time, the representation of Muslims in India’s government is falling, while the Muslim population is growing. According to the Pew Research Center, “by 2060, India is expected to supplant Indonesia as the country with the largest Muslim population. Still, India’s Muslim population will remain a minority religious group (19%) in the Hindu-majority country.” Though Muslims represent a significant portion of India’s population, the BJP had no Muslim representation from their party in the parliament formed after the 2014 elections.

Yet a slogan on the tip of everyone’s tongue at BJP headquarters in Delhi Wednesday as results came in was, “Sabka Saath. Sabka Visak” or ‘growth for everyone and development for everyone.’

Party supporters were prompt to recite it when discussing the growing marginalisation of Muslims since the BJP came to power and claimed with confidence that the Modi government is committed to everyone’s improvement, whether Hindu, Muslim, poor or rich.

“When Narendra Modi says ‘sabka saath, sabka vikas’ … he never thinks of benefitting Hindus or Muslims. For example, if he’s building toilets in India, he doesn’t think this is a Muslim house, so I’m not going to build it here,” said BJP supporter Saurav Chandyal.

Before becoming his party’s leading candidate for the post of the Prime Minister in 2014, he had won three consecutive elections in the state of Gujarat. He maintained his seat in the state even though there was a breakout of communal violence shortly into his first term as Chief Minister. According to a BBC report, 790 Muslims and 254 Hindus were killed during that violent breakout in 2002.

As the  BJP took a massive lead Wednesday, Indian National Congress party supporters toned down the music and chants resounding in the early hours outside party  headquarters on Akbar Road. A supporter alleged that the INC lost because the Electronic Voting Machine (EVM) used for counting were compromised.

“The main issue is that the Election Commission is hijacked. So, the results from the election commission are complete nonsense. It’s impossible what the results are showing,” said Fatima A., a Congress supporter and Supreme Court lawyer.

The tampering with voting machines has been a recurring allegation from multiple political candidates. Another supporter of INC claimed that the voter list was tampered with, “obstructing legitimate voters like him and jeopardising democracy.”

But voting machine hacking and voter registry manipulation aren’t the only ways free and fair elections can be obstructed, and democracy undone, critics say. The president of BJP, Amit Shah, in a xenophobic statement called descendants of migrants from neighboring countries “infiltrators” and proposed the implementation of National Register of Citizens (NRC) across India. The implementation of this registry requires residents to present documents issued before that prove their presence in India before 24 March 1971.

While the crowd of INC supporters shrunk, the BJP’s supporters kept pouring into the BJP’s headquarters in Delhi, despite the rain. One thing the supporters agreed with the Congress supporters on, was the that the Modi wave had grown stronger. But when asked about the EVMs, the prompt response from a BJP supporters is the lack of hue and cry when a BJP candidate loses an election. “That’s what they [INC] are saying because they can’t accept the defeat. If you just go back 3 or 4 months… when they won [in state elections that also used EVMs], they were fine, and now when they’re blaming the EVM.” said BJP supporter Saurav Chandyal.

But as the crowd moved on chanting the slogan, a voice among them was already preparing for future elections with the iteration, “har baar Modi sarkar” — every time, Modi’s government.