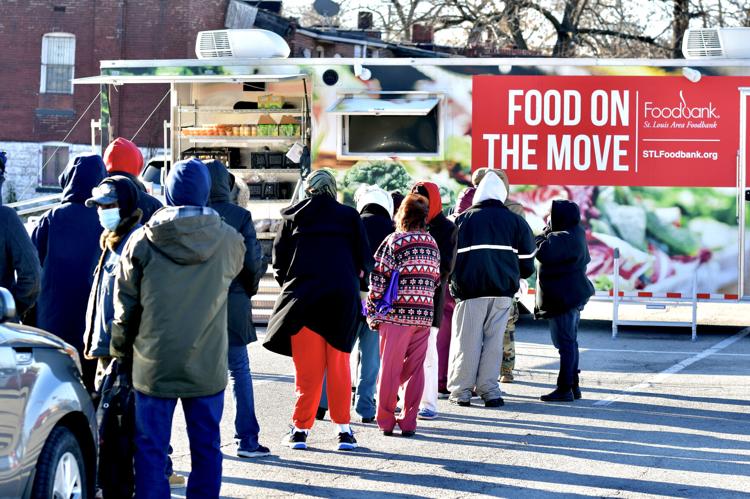 Residents in the Fairgrounds neighborhood of north St. Louis wait in line for the opening of the St. Louis Food Bank's Food on The Go mobile market. The agency offered fresh fruits and vegetables at no cost Monday morning Dec. 6, 2021 a it's drive up unit on a parking lot at N. Grand Boulevard and Carter Avenue. (Photo by Wiley Price/ St. Louis American)

St. Louis, MO – Bracing themselves against an unrelenting December wind, more than a dozen early risers queued up Monday in the parking lot of a North St. Louis Family Dollar store. They awaited the start of a monthly giveaway of fresh produce, meats and hygiene products contained in a colorful 28-foot trailer hauled around by a white Ford pickup.

Sponsored by the St. Louis Area Foodbank, the “Food on the Move” program was launched this  April, near the start of year two of the coronavirus pandemic. The program was born, in part, following the realization that drive-thru food distribution – a mainstay during the pandemic – can be a challenge for area residents without cars.

Edma Mixen, 73, has made the mile and half walk to the Family Dollar from her home before, though this day she was driving. Having a car came in handy as she ambled out of the food distribution trailer toting ham, chicken, soap and other grocery items – all available at no cost to participants.

“I think this will help a lot of people,” she said, as workers organized black plastic crates with yellow onions and bags of green Washington State apples. “If [more] people knew, they would come.”

Putting groceries on wheels predates the pandemic locally and across the country. But as the virus shone a spotlight on holes in the nation’s food safety net, mobile markets, along with urban gardens and pop-up farmers markets, have been gaining attention from people up and down the food chain looking to address unequal access to healthy food, low access areas formerly known as “food deserts” but many activists see them as signs of “food apartheid.”

Supporters of mobile markets note that they can help bring nutritious food to low-income residents in areas many traditional grocers have abandoned. Some operations are subsidized by health care companies in a bid to use better food to create better health outcomes.

Some programs, including the St. Louis-based Link Market, focus largely on serving seniors, who can have mobility as well as financial issues.

In contrast to drive-thru food banks, where families are handed preassembled bags of groceries, in the mobile markets consumers typically pick food items for themselves. That can cut down on waste and discarded items, as organizers at one food giveaway found when bok choy proved to be none too popular in Southern Illinois.

Yet one Wisconsin-based researcher who has been studying mobile markets for more than a dozen years, said she’s seen many such well-intentioned operations come to a screeching halt. Expenses can swamp revenue in for-profit ventures, and financial backers often give up sponsoring nonprofit options after a few years, she said.

“Food on the Move” is operating with a $25,000 infusion from airplane giant Boeing. That helps cover operating expenses including bus maintenance, said Maya Summers, program manager with the St. Louis Area Foodbank.

“We were looking at different ways to expand our programming in a way that [could help eliminate] those barriers that prevented people from attending traditional … food fairs and pantries,” Summers said. “What we noticed was that there were a handful of people who didn’t have access to cars, or to transportation, that would get them through a drive-thru model. And so we look at the development of “Food on the Move” as a way to go into areas that don’t have access to pantries, grocery stores.”

The brightly painted trailer stops once a month at four metro area locations:

Those stops were chosen because residents in the surrounding neighborhoods face food insecurity at a rate of 30% or more, have poverty levels of 30% or more and face     unemployment rates of 15% or more, according to the food bank. Also, they have limited access to healthy food, often because of the absence of traditional grocers.

Since April, the program has served 1,186 families, including 3,476 individuals and 1,230 children under 18.  That works out to about 170 families a month. More than 78% of the participants have been Black or African American.

While Monday’s participants expressed appreciation for the drop-in food giveaway, the numbers helped by the food truck, or any food truck, are relatively small compared to the need.

More than 190,000  residents in St. Louis, St. Louis County and St. Clair County, Illinois, live in neighborhoods without easy access to fresh food, according to data from the USDA.

The limited scale of mobile markets is part of what gives Lydia Zepeda pause.

Zepeda, professor emerita in the University of Wisconsin-Madison Consumer Science department, has been studying mobile markets since at least 2008. She’s heard many a tale of woe.

“I have sat with enough mobile markets [operators] trying to assist them, seeing how little they sell in a two-three hour period,” she said. “When you’re selling maybe $20 worth of produce, you know, basically a box or two of produce, that makes a marginal difference for maybe a few people.

“It’s very hard to make this self supporting,” she added. “So they need some sort of sponsor to really run. Some of them have been started with grant monies and served in partnerships …with a hospital or working with some sort of organization that has deep pockets willing to basically subsidize the mobile market. And that’s hard because most organizations are not willing to do that past two years.”

Zepeda, like many food activists, said she feels focusing primarily on increasing food access ignores the root cause of the underlying problem – poverty. A more efficient solution, she said, would be to ensure that low-income consumers have more financial resources, such as further increases to SNAP benefits and a living wage.

From mail to kale

St. Louis’ Link Market, launched in November 2017, uses a refurbished mail truck to deliver  “affordable” produce to buildings providing housing and other services to seniors, according to Serena Bugett-Teague, community engagement manager for The Link Market.

It also sells produce from two repurposed shipping containers, called kiosks, which have been shuttered since the beginning of the pandemic

Owner Dr. Jeremy Goss, who also is founder of The St. Louis MetroMarket, plans to launch a brick and mortar operation at The Link Market on Blumeyer early next year, according to Bugett-Teague.

In the meantime, the organization was able to make up lost kiosk sales by boosting sales to seniors, through contracts with St. Louis and St. Louis County, she said.

“We definitely reached out to community leaders, and we expanded the senior homes that we serviced,” she said, adding that the eight new stops at senior housing complexes, churches and community centers in low-income areas, will continue beyond the pandemic.

All of the buildings are located in areas with low access to healthy food, she said.

Sometimes, Bugett-Teague has served as mobile market driver. The route can include curbside stops at which members of the public can shop.

That’s when Bugett-Teague, a St. Louis native, gets an earful of how the pandemic has packed a punch.

“When we’re posted in the community, … definitely we hear all types of stories about the struggle that people will face because of COVID,” she said. “It goes all the way from losing jobs, to losing businesses all the way up to losing family members.”

Some said that after losing jobs due to COVID, they cut back on purchasing produce, which can be more expensive than some shelf-stable items.

“That’s why we do our best to offer affordable vegetables to people because we know that the healthier options can be more expensive,” she said. “That’s why we’re committed to offering those options at a lower cost.”

Karen Robinson-Jacobs is a Report for America corps member with The St. Louis American / Type Investigations in St Louis, Missouri, covering business. This story is part of ‘Barren Mile: COVID-19 and the fight against food apartheid,” the result of a Report for America initiative that brought Black-owned newsrooms from New York, Georgia, Missouri, and California together to look at how COVID-19 impacted food insecurity in their communities.