ON THE GROUND IN GULFPORT, MS 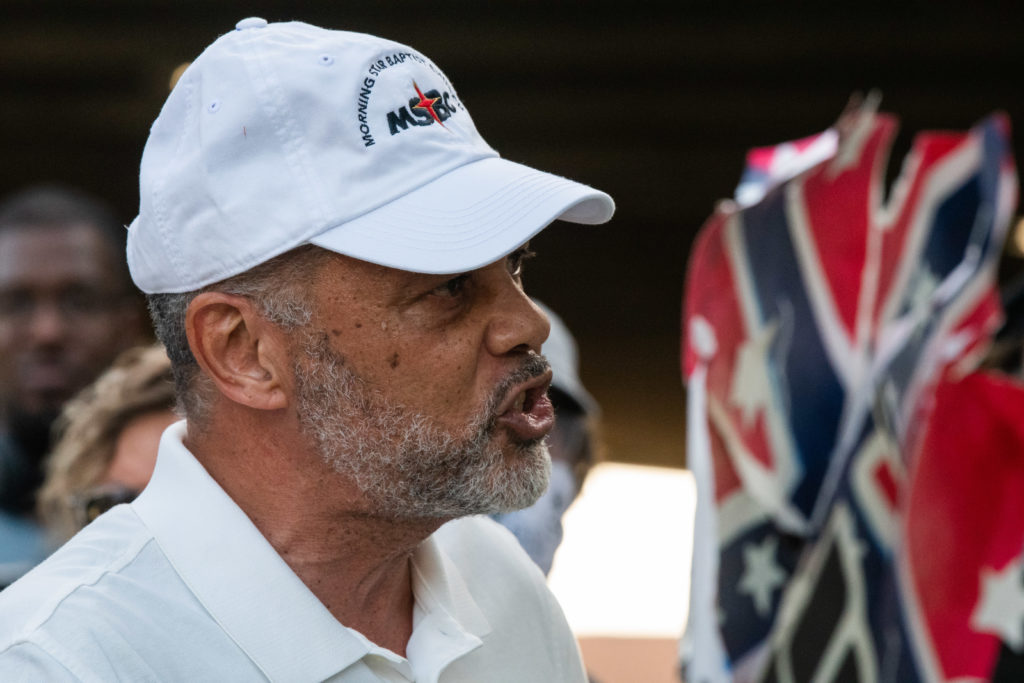 John Whitfield, who represents the Gulfport Concerned Citizens Coalition and Morning Star Baptist Church, is leading a group calling for the removal of a Confederate monument in front of the Harrison County Courthouse. (Photo by Lukas Flippo/Sun Herald)

GULFPORT, Miss.  — When John Whitfield was growing up in the 1960s, the Confederate monument in Gulfport, Mississippi stood 25 feet tall, just as it had since 1911.

“It stood above everything. Even the courthouse,” he said.

As a boy, he was interested in soldiers and war. The man, dressed simply and clasping a rifle in front of him, caught his attention. But when he asked his mother about it, she told him the man wasn’t the kind of soldier he would want to be.

This September, some 60 years later, Whitfield stood outside the county courthouse at the base of the statue. He explained to a crowd of protesters and counter-protesters why he believed it had to come down. Most, like Whitfield, were Black; the counter-protesters, sitting around the base of the monument, as if to protect it and the version of history it represented, were all white.

A counter-protester’s cell phone went off. The ringtone was “Dixie.” Whitfield kept speaking.

“These statues were erected for the purpose of intimidation, to send a message to African Americans that you are not considered part of the citizenry of this country,” he said. “I’m asking that it be removed before somebody comes to deface it or tear it down. So I’m calling on you, Harrison County Board of Supervisors, to do what you are bound to do, place this on the agenda, take a vote up or down.”

The protest in Gulfport that day was just one of many at Confederate monuments across the South since the killing of George Floyd, a Black man, at the hands of a white Minneapolis police officer in May. According to the Southern Poverty Law Center, 43 monuments have been removed or moved in recent months.

Although the push to reconsider monuments is national, the decisions to remove them ultimately reflect local activism and political concerns. In Mississippi, at least five county boards of supervisors have voted to move their Confederate monuments. Supervisors in Harrison County are not among them, a fact that frustrates demonstrators like Whitfield, who see the area as a bastion of relative progressivism in the state.

“We have always said that — the Gulf Coast is a little different,” he said.

The Coast sits between two major cities, Mobile and New Orleans. Military bases house people from all over the country, and the casinos bring visitors from all over the world. Racial progress in Mississippi has tended to come only after a plurality of white people in the state acknowledge the economic costs of bigotry. People on the Coast, more than in other parts of the state, see firsthand the potential economic benefits of shedding a reputation for racism.

“It’s unfortunate that people put profit before persons, but it’s the part of life we have to deal with,” Whitfield said.

And for all its cultural distinctiveness, the Coast is still Mississippi, and the activists’ effort is complicated by a state law passed in 2004. Similar to laws in other southern states, it prohibits local governments from moving monuments unless “a more suitable location” can be found.

Since June, when activists held their first protest at the monument, the Harrison County Board of Supervisors has been searching for such a location. At first, it seemed like the county had a unique advantage: less than 10 miles away from the monument lies Beauvoir, the beachfront home where Confederate President Jefferson Davis spent the last years of his life. Today, the Sons of Confederate Veterans owns the property, which includes a cemetery where hundreds of Confederate veterans are buried. In 2017, Beauvoir issued a statement saying they would welcome Confederate statues from around the country.

When the board reached out to Beauvoir this summer, however, the property said they wouldn’t take the statue.

“Our first and foremost opinion is, all Confederate monuments should remain in the location that they were erected,” said Kitsaa Stevens, director of development and programs at Beauvoir.

At least one other Mississippi county took a vote to remove its monument before finding a new location, but Harrison County isn’t willing to do that; their board attorney has concluded that they can’t act until they find a new home for the monument.

Whitfield says the supervisors are playing “traditional politics.” As the presidential election neared, no one on the five-member board was willing to try to force a vote that could put their colleagues in a tough spot.

Race also plays a role. There are five Mississippi counties where the five-person board of supervisors has voted to remove a Confederate monument; almost all are composed mostly of Black officials. In the three counties that have taken votes to keep their monuments in place, the boards have just one Black member, or are all-white.

In Harrison County, about a quarter of the population is Black. Kent Jones, the only Black supervisor, first introduced the motion for the board to consider moving the monument, but he has not pushed the issue.

The monument protests around the country this summer were easy to shorthand as a response to the killing of Floyd in Minnesota. But in Gulfport, Whitfield said, the idea of advocating for the monument’s removal had arisen much earlier. A few years ago, local pastors and activists were talking about the symbols of the Confederacy that surrounded them, and what should be done about it.

Their state flag was the only one in the country that still contained the Confederate battle emblem. They decided to call for it to be changed, renewing a movement that had seemed stagnant since Mississippi voters roundly defeated a proposal for a new flag in 2001. If they called for the monument’s removal at the same time, they decided, nothing would come down.

By June 19, 2020, the city of Gulfport had voted to stop flying the state flag. It already seemed inevitable that the state legislature would soon retire the old flag. That day, Whitfield and a few dozen others gathered at the base of the monument to protest.

Speaking steps away from the monument that had been around his whole life, Whitfield said his group of protesters wanted more than just the monument removed from public view outside the courthouse. He wanted Black people to have access to good jobs and economic opportunity.

He invoked the landmark 1968 Supreme Court decision outlawing housing discrimination against Black Americans, in which the justices wrote that the 13th Amendment required Congress to eradicate all “badges and incidents of slavery.”

“We’re here to demand educational opportunities for all of our children,” he said. “We are here today because action requires that we do something more than pat ourselves on the back for gathering once again in the face of injustice.”

One recent Saturday, someone had stuck two pieces of paper to the base of the monument, with messages written in black marker: “Oh, No! This has to GO!” and “Not here not now.”

The statue appeared as solid as ever. But after a summer of protest, it was also a visible marker that the status quo is untenable. Whitfield points out that the monument has been moved before, when the county built a new courthouse a few years after 1911. Why not once more?

Isabelle Taft covers communities of color and racial justice issues on the Mississippi Coast for the Biloxi Sun Herald through Report for America, a national service program that places journalists in local newsrooms around the country. This dispatch is part of a series called “On the Ground” with Report for America, an initiative of The GroundTruth Project. Follow her on Twitter: @Isabelle Taft