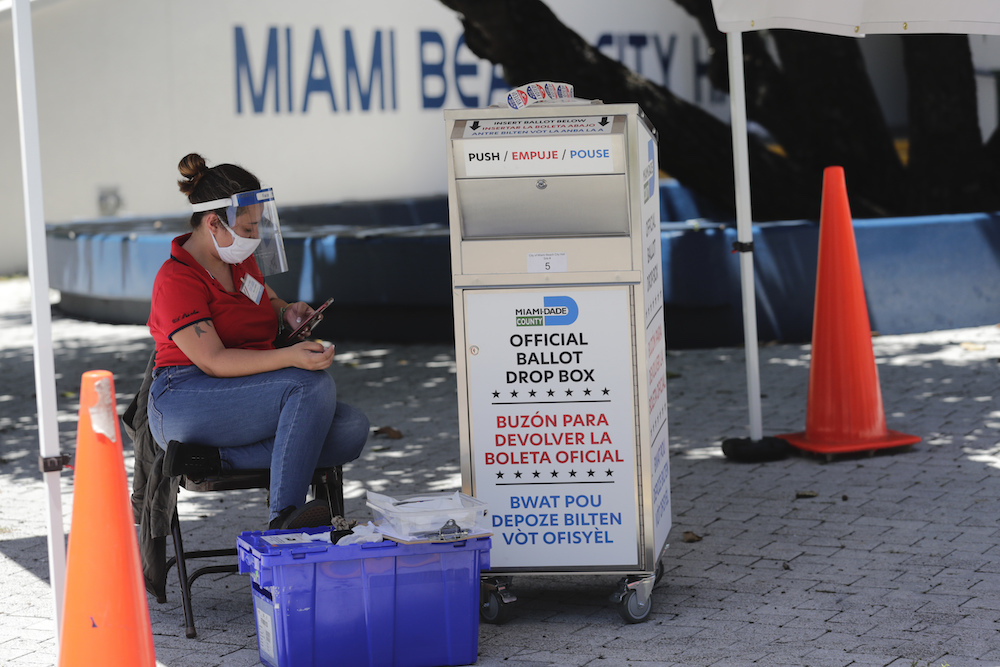 In this Aug. 7, 2020, file photo, a poll worker wears a protective shield and mask as a precaution against the coronavirus as she monitors a ballot drop box, identified in English, Spanish and Haitian Creole, for mail-in ballots outside of a polling station during early voting in Miami Beach, Fla. Getting enough people to staff polling places amid the pandemic is a challenge in many states. The virus’ disproportionate impact on Latinos has made the task of recruiting Spanish-speakers even more difficult. (Photo by Lynne Sladky/AP Photo)

In Pennsylvania, a critical swing state in President Donald Trump’s path to victory, there are more than 111,000 eligible voters with limited English proficiency living in places where officials are not legally required to offer language assistance. That’s well over double the 44,000-vote margin by which Trump won the keystone State in 2016.

Language support guaranteed under Section 203 of the Voting Rights Act kicks in when a critical mass of voters requires it. The law says that officials should offer translated election-related information, and bilingual poll workers, if their election jurisdiction (typically states and counties) has at least 5% eligible voters or 10,000 voters — whichever is less — with limited English proficiency in a single language group.

Pennsylvania isn’t the only state where thousands of such “language minority” voters are left to fend for themselves because they live in jurisdictions where section 203 does not apply. The gaps in language support are wider than the 2016 presidential victory margins in Nevada, Wisconsin, Michigan, Minnesota and New Hampshire, according to our analysis of Census data. Across the country, that’s about 2.7 million eligible voters. And this year, even more American citizens could be disenfranchised by language barriers as vote-by-mail goes mainstream in an unprecedented way. 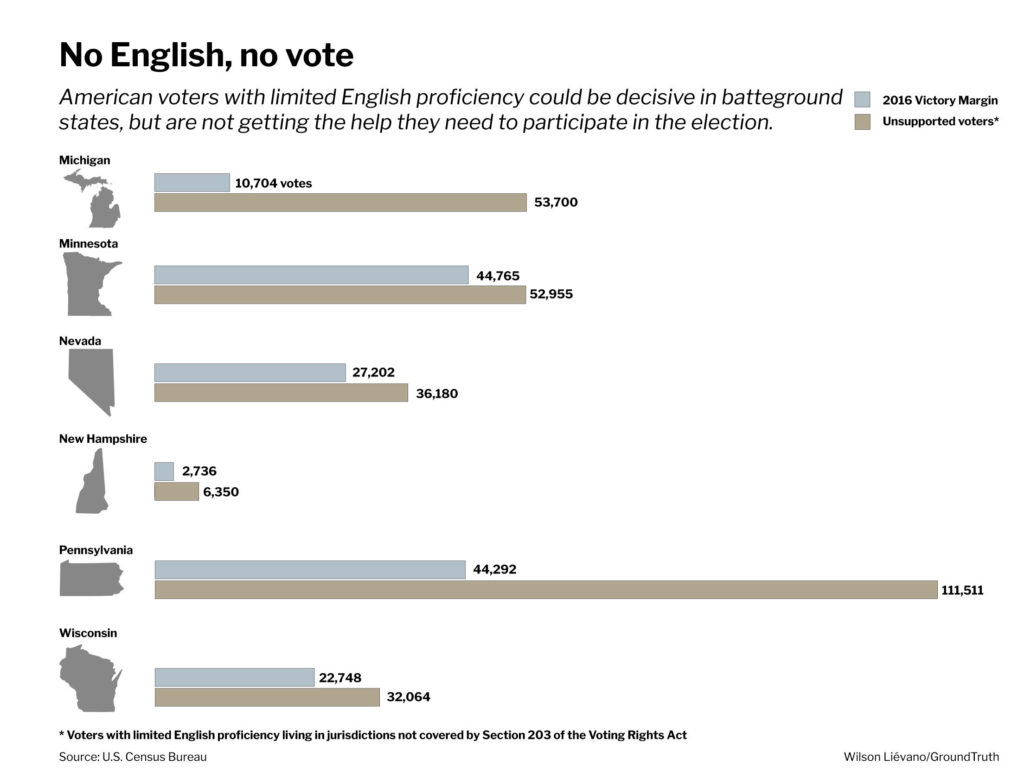 On the ground reality suggests that the scenario may be more drastic than what the data alone indicates. Election officials have failed to translate ballots, recruit bilingual poll workers and distribute multilingual voter education materials even in jurisdictions where the law does apply, says James Tucker, a voting-rights attorney and expert on language-minority groups’ right to the ballot.

“The work on language accessibility is really not an onerous requirement,” Tucker says. “It definitely requires time and effort on the front end. Once you have that initial part done – and I’m referring to things like voter registration forms and instructions, voter information pamphlets – mostly, that doesn’t really change from election to election. Other than maybe the dates. But the basic information instructions don’t change. After you do that, there’s actually very little cost.”

Despite what experts like Tucker says, some jurisdictions still have trouble complying.

When the county launched ballot drop boxes this fall, it provided accompanying instructions and surrounding signage in English only. Spanish translations were made available at the main county building in downtown Reading only after the mistake was brought to officials’ attention.

Eight miles away, the county’s other drop box sat in the lobby of the Berks Agricultural Center for 10 days with more than a dozen signs directing voters and advising them of hours. Only one, on the box itself, was translated.

Commissioner Kevin Barnhardt pledged to address it even as he offered a defensive response.

“You’re making something out of nothing. People didn’t think about it. It was an oversight,” Barnhardt said. “Everything we’ve been doing … apparently, it wasn’t perfect.”

When something as simple as translating signs falls to the wayside in a county where translating election materials — including signs — has been required by federal law for 20 years, it casts doubt on local officials’ willingness and ability to accommodate all voters.

“We have a huge population of monolingual Spanish speakers within Reading. Yet language access seems to be an afterthought. Rather than: ‘Let’s make sure everything is in Spanish so these voters can understand,’” said Ivan Garcia, civic engagement coordinator for Make the Road PA, which does grassroots organizing among Latino communities.

“I can understand if we saw a big boom in monolingual Spanish speakers within a year. It’s not the first election cycle they are going through this,” Garcia said.

Berks initially resisted its legal obligation to provide translation and interpretation for voters, fighting a Department of Justice decree in 2003 to do more to meet their obligations under federal law.

And, this year, Berks commissioners refused to sign off on election text alerts Garcia’s organization offered to send out to Spanish-speaking voters at no cost to the county.

“I thought we were making progress, to be honest,” Garcia said. “That … we have the same goal of expanding the electorate and facilitating equal access. This makes me question whether they really care.”

How different states choose to administer their elections can exacerbate the situation.

For example, 10 states — including Pennsylvania, New Hampshire, Michigan and Wisconsin — prohibit ballot processing before Election Day. This compressed timeframe means voters, especially those casting their ballots by mail for the first time, have fewer, if any, opportunities to correct technical errors.

“These kinds of errors are not distributed equally across populations. And so when we look at valid rejection rates across different counties in Pennsylvania, as in a number of other states, you see that there are racial disparities in the percentage of ballots that are rejected,” says Michael Latner, a political science professor at California Polytechnic State University. “You’re really going to see these inequalities exacerbated and racial disparities exacerbated.”

In Georgia, for example, state officials sent out ballots only in English for the primary — even to voters in Gwinnett County entitled under Section 203 to get Spanish-translated election materials.

Without clear language, the cases are tough to win, says Latner.

“The VRA’s fuzzy language — like, what is ‘reasonable’? — makes it much easier for states to make a case that they’re doing everything that they can, given their constraints,” Latner says.

Even in case law around section 203, courts aren’t necessarily looking for jurisdictions to translate all materials they already make available in English, according to Sylvia Albert, who heads Common Cause, one of the groups behind the Gwinnett case.

“The requirement is simply to make accommodations to ensure that people who speak other languages are able to vote,” Albert says. “So, the court looks at the totality of the things that a jurisdiction does and says, ‘Did they do enough?’”

In the Gwinnett case, the court decided that state officials didn’t need to change course because the federal law doesn’t apply at the state level. (Georgia is home to nearly 53,000 voting-eligible Spanish speakers with limited English proficiency, or about less than 1% of voters statewide). The court’s decision also didn’t require any actions by the county — where federal law does apply because Gwinnett’s home to nearly 10,600 Spanish-speaking voters — to accommodate voters left out by the state’s English-only mailed ballot distribution.

Since then, Georgia’s state department has launched an English-only mailed ballot portal and removed the link from its website to a printable Spanish ballot application (though previously, the PDF generated was in English anyway). Gwinnett County’s website offers a translation tool — Google Translate — much like the election agency websites in many states and counties.

But Google Translate is widely panned for sufficient translation of voting materials, including by some officials who have themselves relied on it (or currently are) before they can complete official translations.

“Google Translate is great if you are on vacation and want to find out where the nearest bathroom is. It is not great for providing vital information on somebody’s right to vote to a language minority population,” Albert, of Common Cause, says.

Those shortcomings are more glaring if you consider this year’s vote-by-mail, according to attorney John Powers, who handled the Gwinnett case on behalf of the Lawyers’ Committee for Civil Rights Under Law.

“We had translators look at the website and document some of the more egregious incorrect translations which can do more harm than good, frequently providing wrong information to voters and is obviously confusing to read,” Powers says. “We’re learning this election cycle, with so many nuances that can go into the [mail-in] voting process, ballots can be rejected for minor technical reasons. So, in this environment, a shoddy Google translation just doesn’t do the job, especially when many Spanish-speaking voters coming to this for the first time need a translation that’s going to be effective.”

A question of political will

Experts say that vote-by-mail introduces several challenges for voters with limited English proficiency beyond the issues that came up in the Gwinnett case.

“Shifting everything over to vote by mail, where a lot of the application process is (as with registration) digital or electronic, poses a whole set of barriers for people of non-English speaking backgrounds and also immigrant backgrounds,” says University of Pennsylvania political science professor Michael Jones-Correa, who’s director of Penn’s Center for the Study of Ethnicity, Race and Immigration. 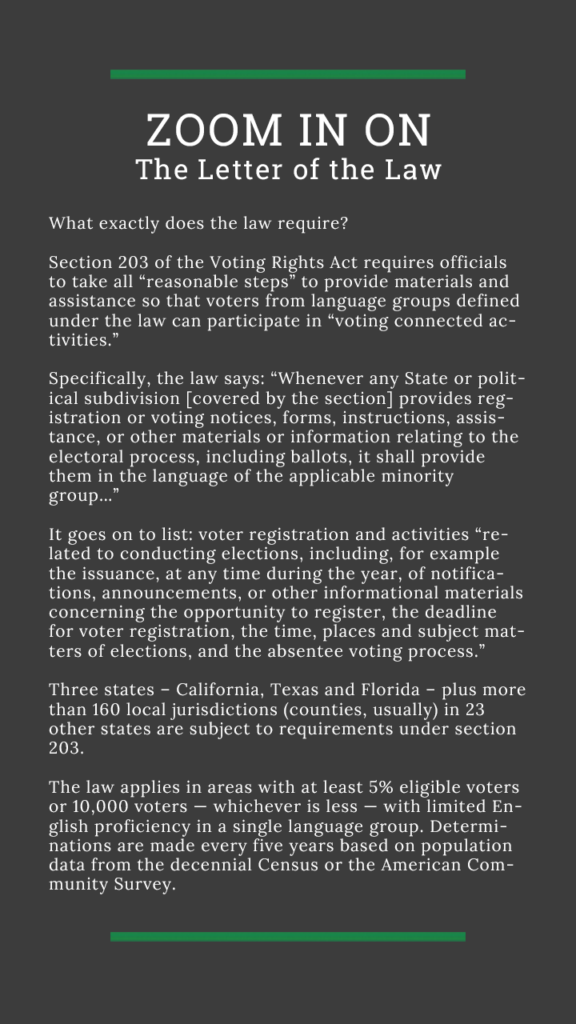 Jones-Correa says it comes down to resources and/or political will, based on his own findings during more than two decades of research on section 203 compliance across the country. Particularly in smaller jurisdictions or disorganized offices, there’s little incentive to invest in accommodating a relatively small number of voters, he says.

“Ignoring these voters, their needs aren’t going to be costly, electorally, to the people in office,” he says. “That’s probably part of the calculation. Also keep in mind that many of these are newer voters or voters who aren’t fully integrated, so you’re not even sure — as an elected official — whether they are actually going to vote or who they’re going to vote for. So, why go out of your way to sort of incorporate or mobilize these voters?”

In a forthcoming study, for instance, he documents officials’ tendency to be more responsive to email inquiries from voters seeking translation assistance when the senders have Anglo-sounding names. That bias was more pronounced in jurisdictions that were Republican and associated with lower turnout rates.

“There’s a partisan component to this. Counties, local governments that are least likely to implement section 203 guidelines are more likely to be Republican than Democratic. Republican jurisdictions don’t see or haven’t seen new immigrant voters as part of their coalition, part of their constituencies,” he said.

Without political incentive, other solutions are needed, says voting rights expert Tucker, who was a Department of Justice attorney before going into private practice.

“You’re always going to have some jurisdictions that are going to exceed what the requirements are, and they’re going to be model citizens and model election officials. But you’re also going to have a large core group of recalcitrant jurisdictions that are going to do everything they can to either evade the law or try to do what they think is just the bare minimum, oftentimes falling short of even what they could perceive to be the bare minimum,” Tucker says. “And that calls for something else, which is enforcement.”

Editor’s note: This story is first in a series on voting access for people with limited English proficiency. This article is part of a reporting effort by The GroundTruth Project on voting rights in America, with support from the Jesse and Betsy Fink Charitable Fund, Solutions Journalism Network and MacArthur Foundation.