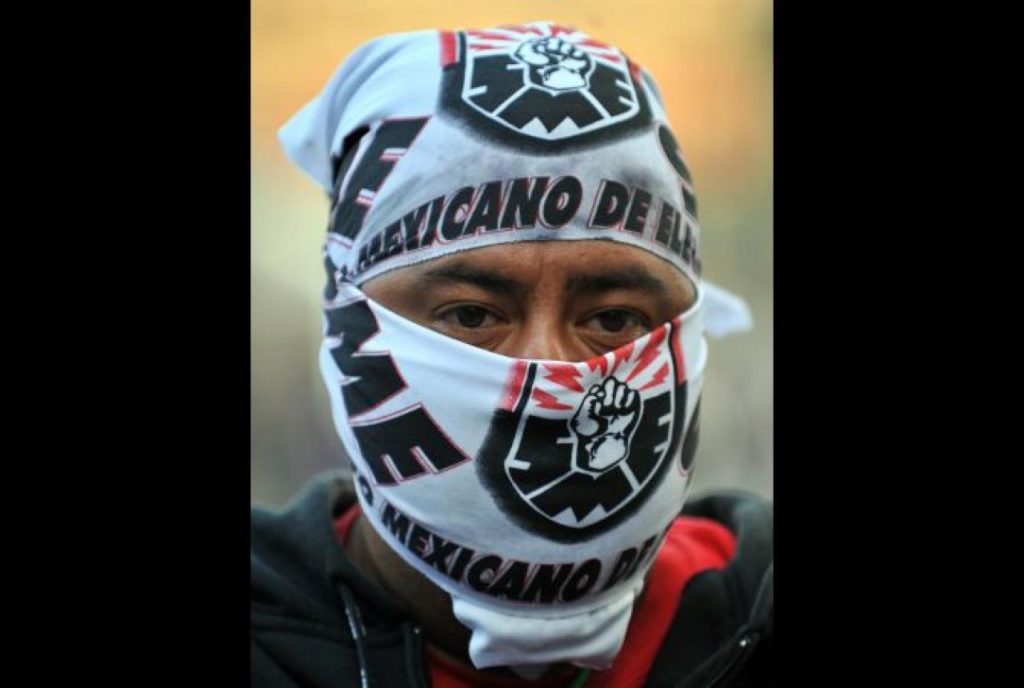 An electricity worker takes part in a protest of former workers of the electric supply agency 'Luz y Fuerza del Centro' against the closure of the state-run power company on November 11, 2009. Some 44,000 active workers and 22,000 retirees were affected by the closure by presidential decree of Luz y Fuerza, which served more than one fifth of the country. - ((Alfredo Estrella / AFP/Getty Images))

“You and your people are screwed,” the police officer told him as he thrust an AK-47 assault rifle into his chest. “You’re not coming in.”

Vazquez, 59, was attempting to report for work as head of a night shift of 80 workers at one of the customer call centers run by Luz y Fuerza del Centro (known as LyFC), which ran the electricity grid for Mexico City and the neighboring states.

He had seen the evening news that night — October 10, 2009 — which reported that President Felipe Calderon’s government had ordered police to seize the bankrupt company’s facilities and kick out its workers.

Nevertheless, the sight of dozens of heavily armed federal police officers decked out in full riot gear herding his coworkers from their stations and forcing some to line up against a wall at gunpoint was unnerving.

“My world collapsed,” he says. “There was this massive feeling of impotence, of not being able to do anything. You can’t respond to the abuse because it will just get worse, and they will beat you, even if you have done nothing wrong.”

Now, nearly three years after the police stopped him from reporting for work, Vazquez is one of roughly 13,000 of LyFC’s 44,000 employees, all union members, who have refused to take the payoff offered by the government in the increasingly forlorn hope that they will get their jobs back.

In the meantime, the LyFC’s operations have been folded into Mexico’s Federal Electricity Commission (the CFE) which runs the rest of Mexico’s grid. It has also outsourced the work of maintaining the LyFC’s infrastructure to a fleet of private companies, a move that has allegedly compromised safety and caused horrific workplace accidents, including dozens of fatalities, to soar.

“It’s not about the money. This is an injustice and I don’t want to go along with it,” says Vazquez. “I spent the best years of my life at that company, working hard every single day, working my way up from when I joined, as a laborer. What a way to treat me after 22 years.”

Refusing to accept the government’s payoff has come at a high cost. Vazquez has separated from his wife and is living in a rented room, barely scraping by on odd jobs and family handouts.

His health has also taken a hit, with him now suffering from gastritis, gall stones, depression and a host of other conditions. “I never even went to the doctor before,” he says ruefully.

All of LyFC’s employees belonged to the Mexican Electricians’ Union, or SME by its Spanish initials, one of just a handful of strong, genuinely independent labor unions in Mexico. Not incidentally, they also enjoyed some of the best pay and conditions in the country. But the SME’s fate could not have been more closely tied to that of LyFC, the sole employer of its members.

In a country where the top 10 percent of society earns 26 times that of the bottom 10 percent — the second most unequal country in the OECD, a group of 34 leading democratic economies — the SME’s efforts to defend its members’ interests stood out like a sore thumb.

Unlike the SME, some 90 percent of unions in Mexico sign “protection contracts” with company management. These contracts typically offer workers the legal minimum pay while guaranteeing employers no strikes will occur.

Most of these so-called “protection unions” charge no membership fees and are instead financed by the employers. Often the company lawyers and union leaders who negotiate them also receive a cut from grateful companies glad to avoid having to field workers’ demands for a better deal.

Selling at a loss

LyFC had been losing money for a long time, requiring the Mexican government to subsidize it to the tune of around 40 billion pesos ($2.8 billion) a year.

This was one of the principal arguments offered by the Calderon administration for the company’s abrupt liquidation.

But that explanation only begs further questions. LyFC, which only distributed electricity rather than actually generating it, was required to buy and sell power at prices set by the CFE.

LyFC was therefore obliged to sell to its 5.7 million residential, business and industrial customers at a lower price than it paid to the companies who generated it.

Meanwhile, the company was owed billions of dollars in unpaid bills dating back as much as a decade, including by large industrial customers, while thousands, possibly millions of illegal connections also weighed it down and helped prevent the company from ever breaking even.

Yet, many residential clients were also fed up with frequent black-outs and the company’s slow response times, while LyFC workers, stoutly defended by the SME, had acquired a reputation for being pampered and overpaid.

Both the LyFC and the SME became easy targets for drastic measures by the government.

Carlos de Buen, one of Mexico’s leading labor lawyers, who has worked for the SME as well as many other unions and employers, believes the president targeted LyFC, and above all its workers, in an attempt to increase his own legitimacy after his narrow 2006 presidential victory.

Calderon needed to stamp his authority on the nation, de Buen believes, and cutting an unpopular labor union down to size was a good way to begin.

“’If you want to play at being an independent union,’” de Buen says, imitating Calderon having an imaginary conversation with the SME. “’Well with me, it’s not going to work.’ And in the process, he was also able to send a powerful message that in Mexico, business does not have to worry about strong unions.”

Calderon’s motives and timing remain the subject of speculation for other reasons too. Mexico’s presidential administrations had wanted to fold LyFC into the CFE since at least the President Carlos Salinas era, between 1988 and 1994.

And a dispute over the hotly contested 2009 election of SME general secretary Martin Esparza Flores shortly before the closure of LyFC, saw Esparza’s defeated opponent accuse him of rigging the result, including assigning votes to deceased union members.

In response, the SME re-held the elections in 2010 and Esparza Flores won an overwhelming victory that even Calderon recognized.

“The SME committed many errors. They thought the government would not be able to repress them,” Bensusan says.

“And they never worked out how to communicate with Luz y Fuerza del Centro’s customers, to explain to them that that poor quality service was not the fault of the workers but of the company.

“They lost the debate because of that. They never found an answer to the narrative that they were privileged or overpaid workers.”

The result has been devastating well outside the ranks of the SME.

Esparza Flores, now the union’s leader, says that pay and conditions, including workplace safety, have taken a huge hit among the thousands workers who have replaced SME members.

They have been drafted in by an armada of private sub-contractors now working for the CFE to cover LyFC’s huge workload, including 38 percent of Mexico’s electricity demand and 32 percent of its GDP.

Esparza Flores claims there have been 32 deaths in the last 24 months, compared to an average of one or two a year previously. “Those are the ones we have heard about,” he adds. “I am sure there are more but the CFE doesn’t make the details public.”

And there have been many more accidents, he claims, including horror stories of workers without training or equipment being electrocuted by high voltage cables and losing all four limbs and even their genitals.

Meanwhile, those workers are thought to earn less than half their SME predecessors, according to information gathered by the union. The CFE did not respond to GlobalPost’s requests for comment.

The union is taking its case to Mexico’s Supreme Court, alleging a list of irregularities in the dissolution of LyFC and the firings of its 44,000 employers.

These include the fact that the presidential decree authorizing the police operation is dated October 11, 2009, the day after it actually took place.

“This struggle is about much more than just our members,” Esparza tells me in his office in downtown Mexico City, above the crowded soup kitchen where SME members receive free meals.

“It is about what kind of economy and what kind of society Mexico is. What this country needs is more good jobs, and more independent unions, not less. If you have good jobs with good salaries you increase internal demand.”

With president-elect Enrique Pena Nieto of the Institutional Revolutionary Party (PRI by its Spanish initials) due to take office in December, there is still no light at the end of the tunnel for workers.

“The government is betting on an economic model based on holding down wages,” Esparza says. “There is no mystery why there is so much violence and crime in Mexico. There are no good jobs.”

This report was supported by a grant from the Pulitzer Center on Crisis Reporting.