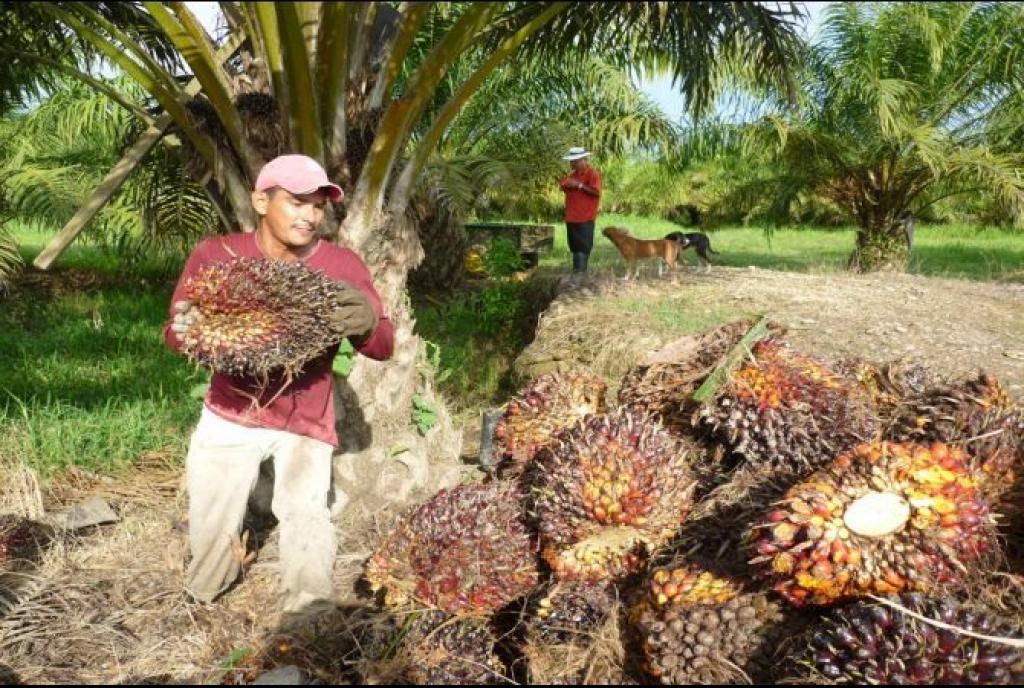 PUENTE SOGAMOSO, Colombia — Sweating in the mid-morning heat, Eusebio Rodriguez leads an oxcart between towering palm trees to gather their purple-and-orange fruit, which is used to make palm oil.

Rodriguez, who earns about $15 a day for harvesting a ton and a half of palm fruit, would like to sign up with the local union. That would mean perks, like sick leave and paid vacations, as well as a helmet and gloves to protect his body from the porcupine-like spines protruding from the fruit.

Instead, Rodriguez belongs to a cooperative which offers almost no benefits or job security.

In theory, Colombian co-ops are owned by the workers who provide businesses with niche expertise and split the profits. But according to labor-rights activists as well as a recent US State department report, many co-ops function as glorified temp agencies providing companies with cheap and docile non-union workers.

Because they allow businesses to reduce labor costs, discard workers on a whim, and eliminate the threat of strikes, co-ops have flourished in Colombia. They’ve also sucked the lifeblood from organized labor because co-op members can’t join unions. That’s because rather than cogs in the means of production, co-op workers like Rodriguez are considered under Colombian law to be business owners.

“But I’m not the owner of anything,” said Rodriguez, 29, a barely literate high-school dropout and the father of two toddlers. “I hardly earn enough money to buy food.”

The outsourcing of labor in Colombia is part of a broad trend as employers around the world seek to shed costs and responsibility for workers. Rock-bottom wages, in turn, have led to a migration of manufacturing, agricultural and other jobs from the United States to Latin America and Asia.

“We would like there to be a somewhat level playing field for US workers,” Rep. George Miller (D-Calif.), who closely follows labor issues in Colombia, told GlobalPost. “But for that to happen, workers must not be intimidated.”

In Colombia, however, the dark legacy of violence against organized labor, often keeps workers from demanding better conditions and denouncing abusive labor structures like co-ops.

“Colombian workers have the right to stand up and fight back,” said Celeste Drake, an international trade policy specialist at the AFL-CIO in Washington. “But it’s especially difficult when there has been this quarter century of terror directed against union members.”

According to the Colombian government, headed by President Juan Manuel Santos, the most abusive co-ops may be on their way out.

In exchange for ratification in October of a trade agreement, that will allow $15 billion per year in Colombian goods to enter the United States duty-free, the Santos government committed to a long list of labor reforms.

A key provision of this so-called Labor Action Plan, which convinced several wavering Democrats to support the trade agreement, is that co-ops acting as temp-agencies-in-disguise must be sanctioned or shut down while businesses contracting their services must also be punished.

During meetings with US officials in February, Colombian Labor Minister Rafael Pardo said that after complaints from trade unions, the government recently fined a palm-oil company and five co-ops a total of more than $6.5 million for abusing workers’ rights. According to one Colombian official, the fines are just the beginning of a broader crackdown.

But in Puente Sogamoso, a village in northern Colombia surrounded by an emerald-green carpet of palm plantations, workers affiliated with co-ops still outnumber the sector’s unionized labor force by more than 10 to one, according to Miguel Conde, an official with the local chapter of Sintrainagro, Colombia’s main farm workers union.

Due to legal restrictions, intimidation and the rise of the co-ops, Conde said, “it’s now easier to form a guerrilla group than a union.”

Contracting amid the boom

At a palm-oil plant called Las Brisas on the outskirts of Puente Sogamoso, massive ovens sterilize clusters of palm fruit, about the size of beach balls, which are then fed into presses that extract the raw oil from the pulp. The steam clouds, heat and roar of the machines recall the mills of the Industrial Revolution. Yet the refined, amber-colored liquid meets many modern-day demands.

Used for baked goods and other foods, palm oil contains no trans fats, a major health concern in recent years. And as alternative fuels catch on, palm oil has become a key ingredient in biodiesel. Demand is soaring. US imports of palm oil have jumped tenfold over the past decade.

Over that same period, Colombia’s palm-oil production has nearly doubled to 942,000 tons annually, according to the country’s Palm Oil Federation. That makes Colombia Latin America’s top producer of palm oil and the fifth largest in the world.

Yet even as employment in the sector has swelled, union membership plummeted.

In the Puente Sogamoso region in 1990, nearly half of all palm-oil workers carried union cards. Anticipating further growth, enthusiastic union officials built a meeting hall the size of a high-school gymnasium, by far the largest building in the town.

“We knew the palm-oil expansion was going to be huge,” said Carlos Daniel Ardila, president of the local chapter of Sintrainagro. But, he said, “nearly all the new workers belonged to co-ops, so we couldn’t sign them up.”

Among the roughly 5,000 palm oil workers in the region today, only 350 carry union cards, Ardila said.

Behind his office, the cavernous union hall sat empty. Stashed in a corner were rolled up protest banners and a broken bullhorn, while the only sign of life was a swarm of wasps. Ardila said the union is now so weak that not even his daughter, who has a coveted full-time job at Las Brisas, wants to join.

Palm-oil company officials openly applaud the demise of the unions, which they say have only damaged their industry by holding strikes. By contrast, they credit the co-ops with helping them prosper in a highly competitive market in which producer countries like Malaysia and Indonesia have the advantage with far lower labor costs.

On average, co-op workers cost companies about 30 percent less than unionized employees because they do not receive certain benefits, such as paid vacations, year-end bonuses, and salary boosts for seniority. They are also more cost-effective, according to Leon Dario Uribe, general manager of Las Brisas.

“Co-ops were not designed to destroy the unions. They were designed to increase productivity,” Uribe said.

Jens Mesa, the president of the Palm Oil Federation, said the sector is being unfairly singled out. He said plantations provide jobs in poor areas and pointed to a recent study by a respected Bogota think-tank that concluded palm workers receive better wages and benefits than 80 percent of all other Colombian farm laborers.

“You have to put all this in perspective,” Mesa said.

But according to the US State Department’s most recent report on human rights in Colombia, the spread of co-ops has allowed palm oil and other businesses to sidestep labor laws. “This practice limited worker rights and undermined worker protections by preventing unionization,” the report said.

For example, temporary workers may only be used for short-term or seasonal jobs. But until recently, these laws did not apply to co-op members because they are — supposedly — small business owners rather than employees. Many end up working full-time hours on a series of temporary contracts but without the benefits of full-time employees.

“That’s the main reason why companies like co-ops,” said Ricardo Aricapa of the National Labor School, a Medellin-based research center. “If you avoid unions, you avoid strikes.”

Colombian unions are notorious for knee-jerk left-wing politics, and to that end Sintrainagro falls neatly into line. Taped to the wall at its union hall in Puente Sogamoso is a poster denouncing the presence of American military advisors in Colombia. It says: “Imperialists get out!”

Yet in the showdown with the co-ops, Washington has become labor’s new best friend.

A large section of the Labor Action Plan — the side agreement to the US-Colombia free trade pact — takes direct aim at the co-ops. For example, it requires that Colombia speed up implementation of a 2010 law that prohibits co-ops from acting as temp agencies. It also calls on Colombia to hire 100 new labor inspectors, half of whom are to be devoted to monitoring co-ops in the palm-oil industry and other sectors.

Some observers say it was no coincidence that the $6.5 million in fines announced by the government last month came just days before Pardo, the labor minister, arrived in Washington to present a progress report on Colombia’s compliance.

“This is the Colombian government’s first action in the past 30 years that actually benefits workers. But without the free-trade agreement it would not be happening,” said Aricapa of the National Labor School.

Aricapa and other analysts claim that if the Labor Action Plan is strictly enforced, nearly all the co-ops in the palm-oil industry would be shuttered and plantations would be forced to hire more direct workers who would then have the right to join unions. Better wages and benefits, in turn, could help more of these workers to reach the middle class.

“Part of Colombia’s future economic success is going to depend on whether they can grow a middle class,” Rep. James McGovern (D-Mass.), who is part of a congressional group monitoring compliance with the action plan, told GlobalPost. “For their economy and for their own security, paying attention to some of these basic economic rights and values is important.”

But the Santos government is facing fierce resistance.

Uribe, whose Las Brisas company was sanctioned by the Labor Ministry in February, insists that the co-ops working for his company are legal and said he would appeal the fine. He added that if companies are forced to hire more full-time employees, it would slam the brakes on a growing industry.

And in an odd twist, it’s the palm-oil producers who are now complaining about yanqui imperialists.

Mesa, the head of the Palm Oil Federation, suggested the Labor Action Plan was a way for US agribusiness to saddle Colombian palm-oil producers with higher costs even as the free-trade agreement opens the door here for cheap, imported oils from the United States. He called the US-mandated plan “humiliating.”

Colombian officials point out they have only 1,400 inspectors to monitor companies and co-ops throughout the nation. But in an interview with GlobalPost, Pardo, the labor minister, insisted: “We will bring them in line.”

Rep. Miller, who met with Pardo in Washington last month, said the Colombian government seems committed to charting a new course in spite of the huge challenges.

“This is a difficult history to unravel, to redirect and get a new start on,” Miller said. “There are a lot of vested interests and people who think (the co-op model) is the way it should be.”

Miller has a point. Even as some co-ops are being sanctioned and shut down, union activists claim they are being replaced by similar agencies that provide the same, cheap, non-union labor — in effect co-ops by another name.

Or, in the words of McGovern: “Meet the new boss, worse than the old boss.”