Meet the guy who builds drones to preserve forests… and learn how to make your own! 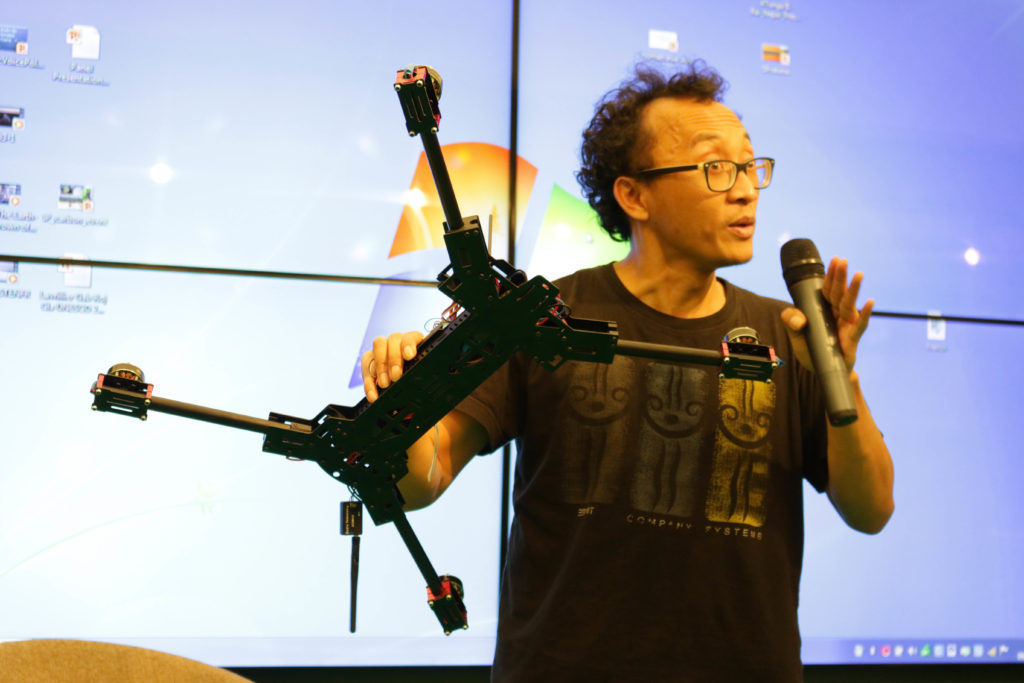 Irendra Radjawali presents his work at the Indigenous Pavilion at COP21 in Le Bourget, Paris earlier this month. Radjawali founded the Swandiri Institute, an organization that works with indigenous communities to gather and analyze data using drones.

When Irendra Radjawali was a researcher studying coral reefs in Indonesia, he attached a point-and-shoot camera to a kite to help him survey the coast. But when he wanted to investigate land grabbing on indigenous people’s lands, he needed something that could take a bigger picture. That’s when he realized he needed to build a drone.

It may seem an unlikely move for an activist-turned researcher who spent much of the 1990’s organizing garment workers and protesting the military dictatorship of Suharto. Between being jailed for days at a time for taking part in demonstrations, Radjawali attended engineering school. Now he’s a Ph.D candidate from the Institute for Oriental and Asian Studies at the University of Bonn.

But on a research trip to study rivers in Indonesia, Radjawali noticed the devastating deforestation taking place in Borneo due to bauxite mining. He also heard from the local indigenous groups, the Dayaks, that mining and palm oil companies were working on land that wasn’t theirs – deforesting and taking land that belonged to the Dayaks. Radjawali wanted to compare maps of the concessions given to the companies with maps of indigenous territories. But not trusting government maps, he realized he needed his own eyes in the sky. Knowing a kite wouldn’t be able to capture the vast swathes of land, he asked his friends from engineering school if they had any ideas. Their answer: drones.

“I know drones, but aren’t they for killing people?” Radjawali responded. He soon realized that drones would be the key to monitoring where mining was happening on indigenous land. “If we can fly, we can counter map, then we can win,” said Radjawali.

Using YouTube, DIYDrones.com and open source flight controller hardware, Radjawali built his first test drone out of wood in 2 weeks. His final work (not made out of wood) cost him 500 euros, a drop in the bucket compared the 40,000 euros a commercial drone would have cost him. His drone can fly up to 300 kilometers for three days and three nights. He and the Dayaks have used it to map 600 hectares (1482 acres) of community land. The maps produced, Radjawali argues, are far more accurate than satellite mapping because the high resolution can help distinguish where villages are. Together they took their map to constitutional court in Indonesia last year, proving that mining companies were stealing land and winning recognition of community-managed land.

Mina Setra, Deputy Secretary General for the Indigenous Peoples’ Alliance of the Archipelago in Indonesia, said that using drones has made mapping much easier, and more attractive to young people in her community.

Radjawali presented his work during the United Nations summit on climate change in Paris earlier this month. He and other panelists discussed technology used to preserve forests as a solution to climate change. Moderating the panel was Victoria Tauli-Corpuz, the United Nations Special Rapporteur on the Rights of Indigenous Peoples. “We can see here how scientists or technological people who are aware and politicized are able to use technologies to support the efforts of indigenous peoples,” said Tauli-Corpuz.

She a cited a recent report that found that 20 percent of the world’s sequestered carbon is stored in indigenous land. “If we want to sustain the sequestration of that carbon not to go into the atmosphere to contribute to the damages we are seeing so far [from climate change], we need to protect the rights of indigenous peoples to continue sustainably managing their lands.”

Here are 4 steps to build your ow, according to Irendra Radjawali: